The Cats I Love - And A Little About Me

I live in a household with two cats. They aren't technically "my" cats, they belong to my roommate, but I love them. One of them sleeps with me when he feels like it.

My username, Bibsy, is the name of two cats I had as a child. Bibsy 1 was a tuxedo cat who had a bib, which is how she got her name. She was adopted from the Humane Society. Unfortunately, that was several decades ago, and such organizations weren't as advanced as they are nowadays. Cats for adoption didn't get vet checks and shots and microchipping and all before they were adopted out. Bibsy was very sick and was only with us for a week.

Then there was Bibsy 2 - a tortie kitten. That too is a sad story - she was only with us for a couple of months. My parents didn't know how to deal with indoor cats and I was young and inexperienced. Bibsy 2 was a very defensive, unpettable kitty. Again, nowadays, there might be cat books and behaviorists who could help her. Back then, sadly, we gave up.

I chose "Bibsy" as my username to honor these cats who deserved better, and as a sign of my commitment to learning and taking advantage of so many advances in cat knowledge available to people today.

The two cats in our household are going through a trying time - the female is 4, was an only cat adopted at a young age from the shelter. Then came the stray 3 month old male kitten a little over a year later. The two have never totally bonded, but this year things became very difficult with spraying, urinary crystals, fighting, and other issues which we have now learned have to do with the cats reaching that stage known as "social maturity." I joke to my roommate that they should call it "social immaturity" since it seems that they've regressed!

But as many of you probably know, it's not that simple.

So, I'm here to learn and share, and help and be helped.


New Here? I Have A Few Suggestions For You!
How To Add A Picture To Your Forum Post
Community Guidelines & Practices - Frequently Asked Questions
Forum Rules

Welcome to TCS! We’re glad to have you here! We love pictures around here, so please do post some of your kitties!

Introducing cats can be a tricky process, and, if you would like to start a thread in the Cat Behavior, you’ll get more input from some of our resident experts, but, for now, I’d like to link you towards two helpful articles:

How To Fix An Unsuccessful Cat Introduction

Welcome to The Cat Site! It's a great place to learn about how to handle problems with your kitties. We would love to see a picture!

How sweet to have chosen the name of your childhood kitties as your username. They clearly left a deep impression on you, despite the short time they were in your family.

I hope you'll post in our various forums, so that other members can offer advice/support for your roommate's cats. And if they (the roommate) is ok with you posting pics of them (the cats), post some pics.

How To Add A Picture To Your Forum Post

Welcome to you and your kitties

Welcome to the site

WELCOME! To you and the two kitties in your life...um...what are their names? I don't want to call them "What'shis/herface!" And yes, pictures would be wonderful! You joined for all the right reasons, and we have forums and articles aplenty to help you in your quest to know All Things Cats, as well as a good many threads that are just for fun, pictures and games, and whoknowswhatall! ENJOY!

I'll check with my roommate if she's okay with me mentioning their names and posting photos. I sure would like to!

Another warm welcome to TCS!

I'm glad you joined the site and came here for advice and support.


Bibsy said:
I'll check with my roommate if she's okay with me mentioning their names and posting photos. I sure would like to!
Click to expand...

I hope your roommate will agree to share the names of her cats and let you post a photo or two.

In case you can't already tell, we love pics.

Is it OK to bump this original intro thread, since I finally reset my password and want to participate? And I can show pictures of the kitties.

Bibsy said:
Is it OK to bump this original intro thread, since I finally reset my password and want to participate? And I can show pictures of the kitties.
Click to expand...

That would be great! Would love to see pictures!

Bibsy said:
Is it OK to bump this original intro thread, since I finally reset my password and want to participate? And I can show pictures of the kitties.
Click to expand... Hi, and thanks for the warm welcome back!

Here are the pictures of the cats: 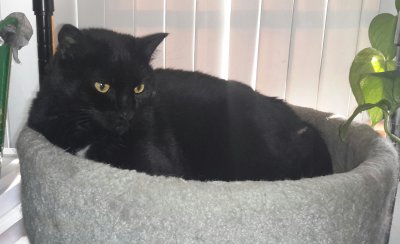 And this is her ornery little brother, former feral Purrcy. 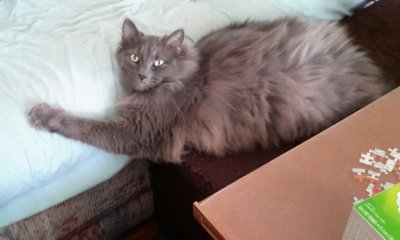 They still don't get along much better than they did in 2018. But now that I'm back here I can read and ask questions on the forums and maybe we can find something to help them. They are both sweet cats at heart with us humans, just not each other.
S

Welcome Bibsy! I think you'll find a wealth of entertainment here and lots of help too. Cats Penny and Purrcy are adorable!

The two in my avatar belonged to my former roommate. Tipper on the left, Tikki on the right, sisters from the same litter. Tipper sadly met her end when a neighbor didn't bother to tell her owner that they were planning to call Animal Control on the ferals. Tikki is still alive but elderly.

Location
where my cat is