I also took part in rescuing Nespresso today. A friend of my neighbor (same neighbor, different friend) was on vacation on an island nearby, and she found a kitty hiding under a truck. Nespresso was so thin that she gave her a bit of tuna. After that, Nespresso was following her everywhere. So she took her back with her. Neighbor asked me for help, so I asked the rescue. Considering Nespresso's state, and the fact that the friend is going to foster her, the rescue agreed to take care of her.

She arrived this afternoon. I've never seen a cat that thin before. She's skin and bones, I could feel every bone in her spine. Her third eyes are showing, and when I did the tent test, her skin just stayed up. Her coat was dry and full of dandruff, and she was lethargic. I gave her homemade pedialyte and wet food. She ate a little, and drank. We put her in the neighbor's bathroom with everything she needed, and we waited for the rescue to come pick her up and take her to the vet. I don't know how old she is, but she has her adult teeth for sure. No chip, and we don't know if she's sterilized or not. But she was very social, and she was purring.

She's now at the vet. They are keeping her tonight, but I think she will stay longer. Blood test shows she's negative for FIV/FeLV! She's on IV fluids, and they were debating syringe feeding her or not.
Anyway, she's all set! I'll have more news in coming days, but here she is : 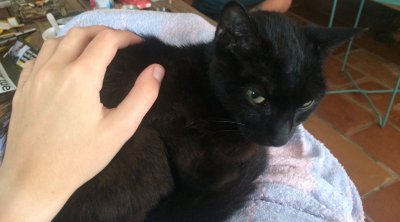 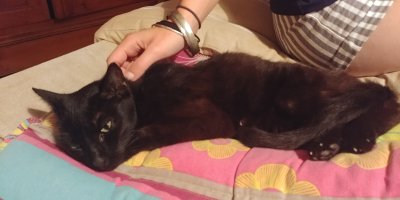 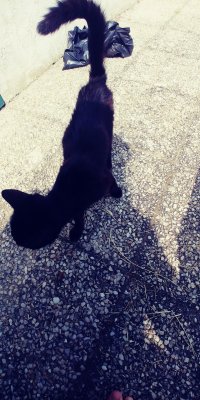 Poor kitty, but her luck has now changed thanks to you and your friend.

Oh my! She is very thin! Thank you and thanks to your friend for this rescue. I hope the kitty will be okay as she is very pretty.

Let is know how this family makes out with Leyia.

What a lucky cat! I'm so glad she is going to have a home from now on. Some of mine were just skin and bones when I found them too, but they soon recover with proper food.

I hope everything works out with Leyia's new family.

Lyzzie ? Any chance of an update?

Lyzzie ? Any chance of an update?
Click to expand...

Yes! Sorry, I've been SO busy since the last time I posted. But first things first!

Leyia update!
The family that came and saw Leyia adopted her

They were fantastic, a couple with two kids, the little girl was a little "hands on", but the parents were very good at tempering her enthusiasm. So we brought Leyia to her new home the following Saturday (Sept. 2). She's one lucky kitty, the home check went great, they had already bought her everything, and lots of toys.

I got news the following Tuesday (Sept. 5) that she was great and everything was going fine.
Here's a pic they sent me : 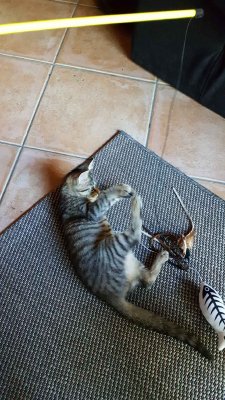 ML (my mentor) also got news last Sunday : "Everything is going very well, Leyia is really adorable. She seems to like everyone in the family and we are really happy to have her."
I think it's safe to say that she's going to be definitely adopted. We ask our adopters to give the cat a month before they decide to keep her or give her back if something is not going right.

Nespresso Update!
So, Nes stayed at the vet for one night. She got IV Fluids, worming meds, and since she wasn't identified, she got chipped. She's officially the rescue's cat. Her age was estimated at 2 years, and considering the state of her nipples, I think she's had at least one litter. We still don't know if she's spayed or not, but for now that's not a problem. Poor thing was only 2 Kg (4 Lbs).
She's still with my neighbors for now, she's on a special kibble diet to help her regain weight.


As for me, the rescue was more than happy to integrate me as part of the team, and I'm now being trained to answer the rescue's hotline! I'm going in every morning except on Sundays. Today was actually my first time alone, and it went very well. I also will be in charge of some of the rescue's website update, I should begin training for that soon.
I met with the rescue's President, she's 83! She's a very caring person, I learned a lot from just one morning with her.

Right now I'm doing research on how to get my certificate to be able to do Pet-Sitting. I think that would be a great addition to the rescue's work, plus it will actually be my new work! I already have my own business, which is not doing really good, so I think that's a great opportunity for me to work and have fun at the same time!

Good for you! Thanks for the update.

So happy for Leyia!
M

How did your other cats react when she left? Do they miss her a lot?

maggiedemi said:
How did your other cats react when she left? Do they miss her a lot?
Click to expand...

They acted like everything was fine! If they miss her, it doesn't show at all. Go figure, they're cats after all...

Thank you Lyzzie, that's a great update. Glad to see our little princess so happy in her new home.

Sounds like you are going to busy helping out at the rescue. I bet it will be really rewarding. Keep us updated on Nespresso. I hope she puts on some weight soon.

I have a new pic of Leyia! 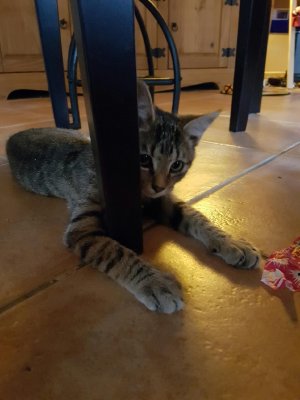 Nespresso Update!
I brought her to her foster home yesterday. She acted like she was home already, she's so easy going! I weighted her on Tuesday, 2.390 Kg! She gained almost 400 gr in two weeks. She's doing great! Her first night went well, and she was affectionate with the foster's friends as well. She really is a great cat, I hope we can get her adopted fast as soon as she's healthy again. Her spay is scheduled two weeks from now, but we'll see if she's strong enough then.

Lyzzie, how are all the cats? Haven't heard from you in a while. I miss reading your posts!

The cats are great, thanks for asking!

It's been a long time since I updated, and a lot happened, it's probably going to take me a few posts... It will include : a 3 AM rescue; climbing over balconies; a feral foster; giardia (a LOT of it); and probably a lot of other stuff. I was busy!!

I should say that working with the rescue was awesome, but very stressful.
As long as I was doing what I was told, it was fine. But then I started talking with people who were doing different things for the rescue, because I was interested, and it all went to heck.
There is so much drama, I can't stand it. It's all about power. Are you kidding me?? It's a non-profit, we're all volunteers, all at the same level.
I want to help cats, and people who want to do the same. I don't want to talk about people behind their backs and belittle them every chance I get. No thank you.
So I'm finishing up with them, and then I'm going to volunteer somewhere else.
Bright side is, I met a lot of good people, and helped cats along the way!

Nespresso update :
She is doing good, she's still with her foster. I insisted a little to get her checked again because she was drinking a lot, and after blood tests and an echo, we know that she's only got one functioning kidney. She's got kidney dry food, a bit of wet food, and one liquid medicine every day for life.
Her next check up is coming up, we'll see if she can be spayed or not. She was not strong enough before.

Here's a pic of this cutie : 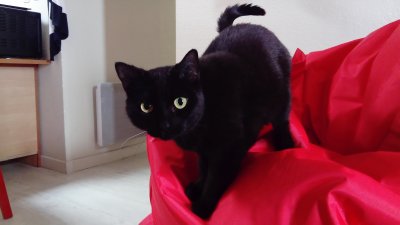 She looks so much better!
M

Thanks for the update! I can't wait to hear the rest of the story...

She looks great! So happy to hear she is doing well.

I know what you mean about all the gossip and back biting, I've had similar experiences when working with other people who do TNR. It's a shame, isn't it? It's the same the whole world over

OK, I finally have time to update. This is going to be loooong, so bear with me (if you want to of course).

Back in Sept. 2017 I started being more involved with the rescue. I was taking phone calls at first, and very quickly I was in charge of some foster families. There is so much to do and so little people to do it that it got out of hand fast.
By December I was updating the website almost daily, answering phone calls 4 days a week, and I had more than a dozen foster families to take care of.
It would have been fine if communication was great between members of the rescue, but sadly that's not the case. I became very vocal about problems I was seeing, and quickly understood that's not how this rescue works. I made friends with like-minded people who were completely out of the loop despite being in the Administrative Counsel! It went so bad that they actually quit their positions in November. After that I just couldn't do it any longer.

Now I know why their volunteers just quit all the time. As long as you're doing what you're told to do, and don't ask any questions, you're fine. Start using your brain, and you're in trouble. I really hope that's not the case with every rescue, and that some can actually work together better than that.

Honestly, it was really depressing, BUT... I got along really well with three people, in particular a woman named Sophie. We talked a lot, and she asked me if I would be interested in getting together to create an association of our own, dedicated to helping people with low income getting their cat spayed/neutered. I said yes, and we are almost ready!

I literally was looking for this thread the other day!
Honestly you have that with rescue.. there are loads of differing opinions and often board members split and start their own groups. There is a group in our area that is FULL of drama. They will not work with us. I actually am partnered with a couple of the board members who left and started their own group. I don't know why we cant all just work together for the sake of the animals. We will get a lot more done if we collaborate.

A lot of people say the same thing about shelters and rescues. I hope everything goes well for you. Sounds like you and Sophie get on well together so you should be able to do great things.

Keep us updated, I always like reading your posts.