Thank you both! We are almost there, all we need now is at least one or two vets willing to work with us. That shouldn't be a problem because Sophie has great relationships with the vets, she was one of the board members of the previous organization for the last four years, and a volunteer since 2010. She TNR'd a lot of cats over the years.

Anyway, back to the cats' story!
I got a call last Sept. about two cats, apparently lost, trying to get inside multiple apartments. That street is one of the busiest, right in the center of town. The woman that called tried to find the owners, talking to her neighbors, but no one knew anything. I told her to try and coaxed the cats in her apartment, but she didn't know how to do it. She was very kind but really needed help, so I went to talk to her.
We agreed that since she was seeing the cats early in the morning (between 5 and 7 am), she should call me next time she saw them, and I would come and see if I could do something.
Well, she called me at 3 am... There was only one cat, so there I go, on foot, with my cat carrier (I don't have a trap), 3 in the morning. Later, everyone told me I was crazy. I would do it again, I don't care! What else was I supposed to do?

So, I get there, and this cat is scared, but mainly, he is hungry. I think it took something like 10 minutes, and he was eating dry food in my hand. I put food on the pavement, and just took him by the scruff and put him in the carrier. He didn't fight, but meowed a lot! And then I thought "OK, now what?". The woman didn't want to take him in, and I couldn't go back to my place because it was too far on foot with the cat. But the rescue's office was two streets over, so I went there.
I made some coffee, put a litter box and food for the cat, and just spend the night there. I waited until 8 am and then called one of the rescue people to explain.

I named the cat Willis, here he is :

One of the most loving cats I have ever met! He stayed in the office for a week because we didn't have any foster home for him. We searched for his people but didn't find them, and the cat he was seen with stopped coming.

Willis was estimated to be 2 years old, was neutered and identified, and went to his foster family after a week in the office.

But one week after he arrived at his foster, he stopped eating and became very lethargic and dehydrated.
He was hospitalized for three days, and tested positive for FIV, had ulcers on his tongue and palate, and a parasitic infection.

I talked to the vet and discussed with him treatment options. The problem was money of course. Finding adopters for a FIV cat is difficult (people don't understand that these cats can live a great life) and the cost of his treatments would have been too much for the rescue.
Decision was made to euthanize him, and I went to the vet that morning to be with him when he passed. I didn't want him to be alone. I cried a lot, and I still do sometimes when I think about him.

He was my first rescue, and it hurts more than I want to admit. That's probably why I waited so long to write his story here. He was a really cool cat.

I still have one or two sad stories, but also lots of happy ones, which I will gladly share with you!
M

Thanks for the updates, even though that was sad. How are Sparrow, Shadow, Medley & Moby?

M maggiedemi They are doing great!
I have some pics : 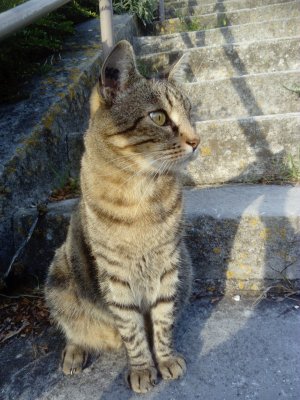 Sparrow aka Choup.
After fighting against his furry will for the first year we had him, he's now very happy to be able to go outside when he wants to, but always during the day. He has a curfew 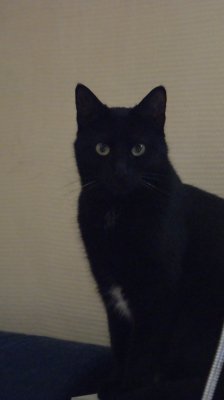 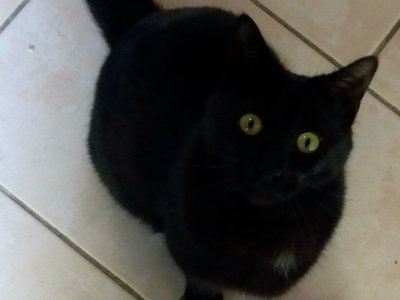 Shadow, aka Shasha. She found a way to go outside by jumping (really high!) on a fire extinguisher case in the courtyard, and then on the roof. So she's the only one to go outside besides Sparrow. She's cute and cuddly but very independent. She's doesn't like the brothers because they keep running after her... She also has a curfew! 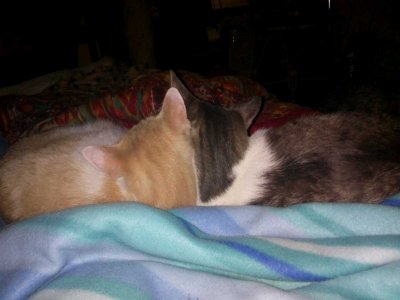 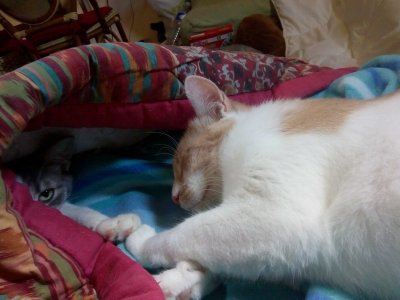 Medley (tabby red) and Moby (tabby gray).
It was the right call to adopt them both, they do everything together. Medley is a goofball, always doing weird faces. Moby, we call him "The President", because he's always really dignified.

"Hello,
I'm not going to be able to keep fostering Freedom. She peed and pooped on my couch and bed again. I can't keep up with the washing, it's costing me too much money. And I don't want to lose my deposit.
I don't feel anything between me and her, I don't think I'm the right person to help her. I've never done this before, but there's nothing else I can do for her."

She's a student, and doesn't have a washing machine, so laundromat gets pricey real fast. She a great foster, and always end up with the more challenging cats. She knows her stuff. So when I got the text the following morning, I took it very seriously.
We didn't have another free foster, let alone someone with the knowledge to deal with the situation, so I called her, and told her to just bring her to me.

A little background on Freedom (she was well named...) :
She was found in a chicken coop with her mom and 3 sisters, when she was 4 months old.
She was fostered by someone else until she ended up at Laura's.
She was not social AT ALL. Hiding, hissing at every human, and the best part : peeing and pooping everywhere. And her poop was really soft, too.

So that's what I got : a fearful, pissed off kitty. And soft poop. Lots of it. Everywhere.

She spent a week and a half in the bathroom, but she wasn't making any progress, and that room is so small, it wasn't doing any good. I couldn't touch her, she wouldn't eat, or even move when I was with her. I was able to get her to eat treats, but only when she couldn't see me.

The poop problem got worse, and I had to get her to the vet. That was not fun. The vet wouldn't even try to touch her, I had to go get her by the scruff because she was scared out of her mind. He had to sedate her. That was the first time I could pet her. I made the most of it, believe me.
That visit didn't wield anything, he gave me gastro intestinal dry food and forti flora.
And then, Beach, my other foster kitty, got liquid poop too. So back to the vet with him this time. And no, not the same vet. He did a fecal on him, and... giardia.
We concluded that since he didn't have any problems before Freedom arrived, she must have given it to him. And that wasn't hard, they were always together.
Anyway, long story short, all of my cats got it too. Fun times

It took almost two months to get them all healthy again.
Beach got adopted back in February.

We also had a long battle with the litterboxes. Once we understood that she was not doing her business in them because we were in the way and she was afraid, it got better fast. We put more boxes, and were careful of the placement of them. Now we are back to 3 (but they're big!), and she's using them perfectly.

Anyway, Freedom is getting along with the gang. She loves other cats. She just couldn't care less about humans.
It took months and lots of treats before I could pet her. She stopped hiding, and I think she feels good here. I just wanted her to stop being afraid. I don't care if she doesn't want pets, I just want her to be happy. After all that work, she still has a long way to go, but we're doing it at her pace, because she's now going anywhere. I lost my trust in the rescue and the people that run it. And I don't want Freedom to be adopted because of her looks, by someone who isn't going to try and work with her. And I'm selfish, I love her!

So...meet Freedom, aka Mama
It's easy to take pics when she's with another cat 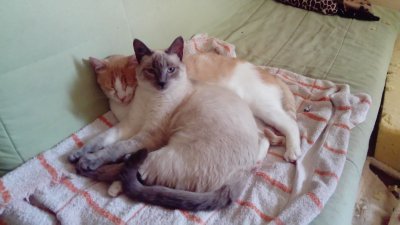 Or when she's sleeping in the open 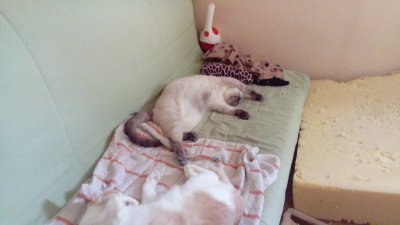 They often do this : 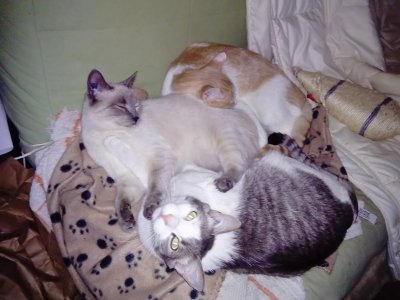 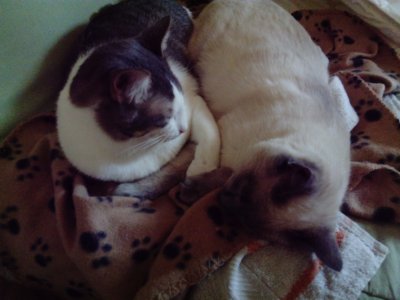 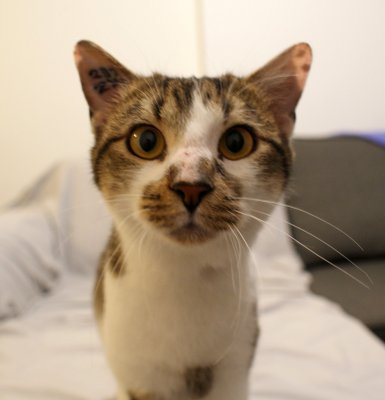 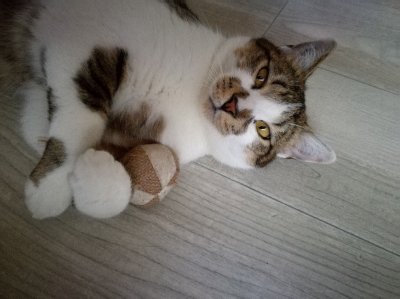 Great update, thanks for writing all that.
M

Thanks for the update and pics! Wow, a lot has happened for you. It's great that you were able to figure out what was wrong with Freedom. Is she Siamese? She seems to really like Medley and Moby.

That's such a sad story about Willis. Too many people think an FIV positive cat will be too much work, but they can have really long, healthy lives with the right people.

I'm sorry it didn't work out for him.

Great updates about the rest of your cats. Freedom is so pretty. Never mind if you can't pet her, at least you can look at her and admire her that way.

Thanks for the update.

I think she is part Siamese. She's spayed and chipped, and her "official" description is Blue Point.
She has blue eyes and is pointed on 4 legs, face, ears and tail, and a little bit on her back, under the scruff.
But she also has light brown stripes on her back legs, tail, and coming from her eyes, really tabby-like.
And she's a talker!

She is beautiful, and SO and I spend a lot of time just watching her and say so to each other

It is sad about Willis, I think that's why I'm having a hard time with it. He didn't have to die. Not enough resources is what killed him in the end.
M

Hi Lyzzie. Any updates on your clan of kitties? I always love your stories.