I had a sesame bagel with a little cheese on it.

a slice of carob cake with mint carob buttercream -- my dessert for last night, in the early morning hours.

two slices of Irish Soda Bread with a little margarine -- my breakfast!

I had an English muffin with butter and grape jelly and a diet coke.

the mint carob buttercream really was tasty! a couple things that i did/found. the 6-7 cups of powdered sugar: i found that it was best to add 6 cups, and then add more as needed. i used green food coloring, liquid kind, instead of coloring gel -- and had no problems. i did add the optional salt to the recipe, and was glad that i did. the buttercream was sweet, and sweet enough, but not too sweet. i used regular table salt. and i didn't have mini carob chips, so i ran some regular sized carob chips through the blender to chop them a bit. from doing that, i got smaller chip pieces as well as small 'crumbles' and fine-ish powder. i spooned out what i needed of the smaller chip pieces, for making the mint carob chip buttercream, and the crumbles and fine-ish powder are going to be used in making carob tapioca pudding.

i'm not overly generous with frostings on my cakes, and was pleasantly surprised that the mint carob chip buttercream recipe gave me just the right amount to frost the three-layer carob cake. it's also great that the buttercream can be frozen for at least 3 months! i had planned to freeze any extra, and use it to frost some carob brownies.

and a tip: i always mix powdered sugar in just a little, before using a (handheld) mixer. i don't like the powdered sugar, or any ingredient, to become 'airborne'!

i'm not sure that i had posted a link to the recipe, so here's a link -- The BEST Mint Chocolate Chip Buttercream Recipe!

i had a slice of Irish Soda Bread with margarine, and a glass of milk -- my breakfast!

Oh my, thank you ever so much for that recipe and your tips!! You are wonderful!

I had a toasted bagel sandwich with jam and butter inside.

both end slices off of a loaf of Irish Soda Bread, with butter -- my breakfast!

i nibbled on some butternut squash that i roasted, and had several lemon creme sandwich cookies.

A mishmash version of chicken parmesan. It looks funny but tastes good LOL

A roll with a little cheese.

A breakfast taco stuffed with pork, potato, egg and cheddar.

a bologna and beef cotto salami with mustard sandwich -- my lunch.

Wishing I'd gone ahead and paid full price for real Funyuns instead of these nasty fakes. 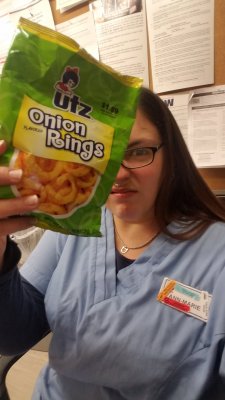 A slice of brown-bagged pizza for work lunch.