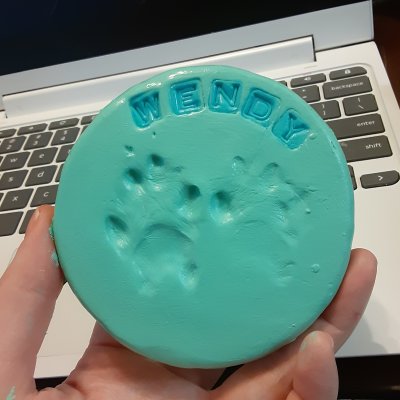 Not sure exactly how these posts normally work. I'm just going to journal about the end I think.

This was the first animal I've had who's death I've been present for (I had a mouse die last year, but other than that I've had no pets die in my adult life.)

Wendy was not a good eater for the last year of her life, but she started slowing down more over Christmas and then it came to a few bites a day 2 weeks ago, plus a lot more falling over and not trying to get up. At her vet appointment 10 days ago, the vet didn't need to do more than listen to her heart, and told me the end was coming within the week, so we euthanized her that day. My vet also told me it was probably for the best that she wasn't eating, because at that point food would have made her feel worse. She did assure me that she wasn't in any kind of pain other than her usual arthritis.

I stayed with her and I'm so glad I did. The first anesthetic shot must have gone straight through her skin because it didn't take, so we sat there for a while snuggled up and purring in front of a space heater. The vet gave her a second dose and then she drifted off, and we got her paw prints which I just painted today the color of her collar. I'm not a hugely sentimental person, but that ceramic circle is really comforting.

I'm going to go into detail because I like to know lots and lots of details at all times, but skip this next paragraph if you'd rather not know much about euthanasia: The next injection was to stop the brain, heart, and lungs, in that order, according to the vet. Her brain was immediate, and a minute or two later the vet checked her heart, and it had stopped. What really astounded me was that her lungs kept expanding for 5-10 more minutes after that. It really kind of messed with my idea of death-that the brain and heart can stop, but there are still cells in the body that don't know that yet and keep performing their function. It was kind of nice, in a way, to see that her death didn't have a firm moment where she was suddenly gone, but instead it felt like she was gradually fading away and it was very peaceful.

I'm so appreciative for how easy the vet made everything. (I love my vet so much. If I ever move far away, that will be the one part of my city that I'll seriously regret leaving.)

I only got Wendy 2 years ago, almost to the day. She was estimated to be 17 1/2 years old this winter, though no one really knows. She came to the shelter after being found on the streets in the middle of Michigan winter, flea ridden, missing a lot of fur, and had never even been spayed. They cleaned her up, took out some teeth, and I adopted her. Shortly after we diagnosed her hyperthyroidism, which we had the radioiodine treatment for and she calmed down a lot and lived a pretty peaceful life, mostly on her heated bed, until her systems failed her. She was clearly such a tough kitty who at 4 1/2 pounds, was fueled by a strength much larger than her size. I trust that she knew what she wanted, and if she had wanted to hang on longer, she would have, but she knew it was her time. I don't think there could have been a better way for something like this to happen. 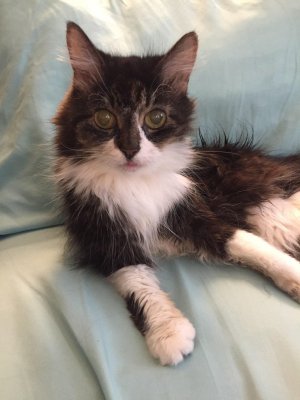 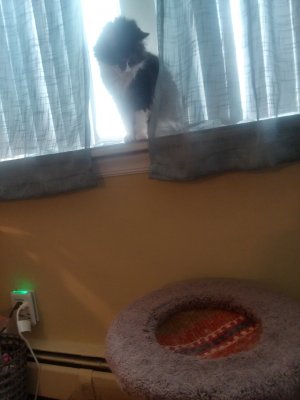 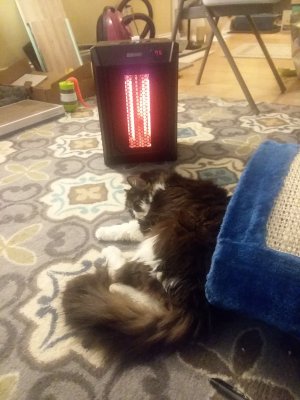 One of my favorite memories: My apartment's heat went out so my landlord supplied us with a space heater and we had a very cozy night together! 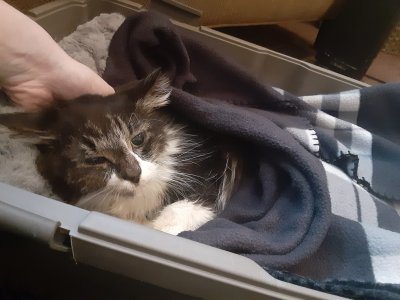 She was starting to feel the anesthesia so her ears were having trouble staying up, but she was still purring away to the end.
C

molly92 Fortunate Wendy, to have had a couple of years of love and comfort, then a peaceful passage over the Rainbow Bridge, rather than a cold, lonely miserable passage out on the street in winter's dark

What a lovely, loving tribute to an amazing cat. Bless you for taking her in, caring for her, and for your tremendous understanding and compassion.
RIP darling cat.

A very beautiful kitty and a beautiful life that you gave her. It’s so reassuring to know she had you after she had such a struggle in the first part of her life. You give a loving tribute to her. The kindest thing of all was to be there loving her as she made the next transition. You gave her comfort, safety, security and a peaceful life. To have someone do all that is the best that can ever be offered. I’m so sorry it was her time to go but she will always remain in your heart. I believe that we carry them with us and they watch over us as we watched over them.

Wendy had the biggest luck of her life when you stepped into her life.
You gave the best thing she could have expected. She passed in peace because she knew that she had it all from life, she had no regrets, she had no unfulfilled wishes. She just had it all. What a lucky cat.

In my humble view, cats know all. They know when in the time, well in advance. This is because they live in a Realm we abandoned long ago.

But it really matters to feel love of a human. Love encompasses life and end-of-life as well.

Memories are part of our life.

Please know that Wendy's love will always be as close as your thoughts and prayers. Love is spiritual, so never ending. Take comfort in the fact that you gave her everything she ever wanted or needed, and that you were with her at the end, though your own heart was breaking. You ended what was to be a lingering, painful end. Where there is no cure, when life ceases to be one filled with joy and good health, you somehow found the strength in your love to help her through it.
I cry with you for losing her physical presence, but what your soul gained in knowing and loving this beautiful little girl will be with you for eternity. She now follows a new path, but it will always parallel your own. My heart goes out to you, I will keep you both in my thoughts and prayers. To be remembered and loved is a great honor, and your lovely tribute assures that this is so. she was so lucky to have you in her life, and you to have her in yours. Pass on that great love she left you, she will rest in peace from now on. Take care of yourself......RIP dear Wendy. You will never be forgotten, you will forever have a secure place in a loving heart. May the good Lord bless and keep you, until you meet again!
W

It takes a very special kind of sweet and wonderful person to adopt a senior cat with health problems. Bless you for giving Wendy two years of love and comfort. So many feral kittens and cats never know such happiness. Thank you so much for caring.

Aww, sweet girl. I'm glad Wendy had such love and attention for the last years of her life. So good of you to take in an elder cat. Rest in peace, little one.

Thank you all so much! Such beautiful words, and they're all so true. I really appreciate all of the love.

I'm so sorry for your loss. What a beautiful girl. Thankyou for giving her a forever home and being there for her. R.I.P sweet Wendy

Adopting an elderly cat, even with special needs, requires a lot of courage and love.
This reminds me that exactly a year ago I had rescued and saved an elderly cat that was sitting in the middle of a heavy traffic road. After the first visits at the vet I took her home. On the following days we found out that she was older than we initially thought, she was deaf, had neurological issues, she likely had a kidney disease and who knows what else. No doubt she had been dumped.
After a week, during which she improved a lot, we booked an appointment for a thorough scan, but on the day before the booked date, she decided it was time to go.

She gave lots of love in those 10 days with us, something that I will never forget.
Exactly one year ago I discovered the wonderful world of adopting an elderly cat.

I have found a sick cat

I am sorry that you lost that gentle little creature but you and her had wonderful times together, no regrets, it was time for her to leave her Earthly body and put on her eternal wings, she is fine now, just fine, and when you meet again one day it will be joyous.....

I am sorry for your loss, I hope that your heart heals a bit more each day, God Bless.....

Rest you gentle, Wendy, dream you deep. Your pawprints are on someone's heart forever.

What a beautiful, amazing, and tough girl she was, is and will always be! To have lived 15 years on the street, and then to be taken into a Forever Home must have been a wonderful awakening for her! She finally knew love, and comfort, and Home, and she left This Adventure for her Next Great Adventure held close in the arms of love. She carried your love with her to guide her on her Path, and now, from where she is, she sends her love, translated and purified into Love, back to you again. And love abides. Always, forever, Love abides. She is with you still.
You must log in or register to reply here.
Share:
Facebook Twitter Reddit Pinterest Tumblr WhatsApp Email Link