Foster fail in progress.... that’s if I can get Sophie to approve...

Hang in there!!
How are things today?

Right now I’d say things are about the same. I did the same thing last night and rubbed her bed and new favorite cardboard box with his blanket before the night. She slept in both so I hope she’s getting use to his smell little by little. I also rubbed a Q-tip on his cheek and left it out for her to find (she likes playing with them. This morning I got them to eat a little closer together. She was calm while they were eating and hissed (though maybe not as badly) and retreated once he started coming to her for attention. I’m just going to keep doing that until I get that crate. I highly doubt I’ll get it. Y Wednesday as it hasn’t shipped yet.

Furballsmom said:
Hang in there!!
How are things today?
Click to expand...

I'm so glad these two have you - you are doing an absolutely terrific job!!

So this morning Lance escaped from the dressing room and went straight to Sophie. I got him when he was about 2ft from her. She didn’t react, maybe she was just too surprised to! After that, they had their breakfast, ever so closer each morning. She was fine. She circled the pen and came to settle really close to it, of course, Lance, the keen little bean he is, went straight to her and she growled (even snorted! Haha) but she calmed herself quickly and walked away. Usually, she growls, hisses and retreats cowardly low to the floor under my bed. It looks to me that even if she still reacts, her reactions are less aggressive/ scared each time. Though I still wouldn’t put him in the room with her as I don’t trust she wouldn’t eat him alive just yet. She doesn’t have any reactions to his smell on my hand after I pet him and even let me pet her once yesterday.
It was however funny to see her clim in her condo for the first time since he’s been sneaking it for little naps. She was playing at the time, so excited, and when she got inside it, she stopped suddenly. Started to smell around with a “dude, what the hell happened here, who stole my crib?” Look on her face and proceeded to scratch the walls of the condo as if to say: MINE.
It was funny to watch. She calmed down quickly though.

The giant crate is actually out for delivery so I’ll be setting this up today. It’s bound to stress Sophie out to have this new giant thing in the room, but in the long term, I think it’ll help.

Furballsmom said:
I'm so glad these two have you - you are doing an absolutely terrific job!!
Click to expand...

Well, I got the crate. HE HATES IT! poor thing just cries non stop and desperately tries to climb out. He’s going to hurt himself if I leave him there. I can use it to close off my doorway but that’s about it. Sophie got close a couple of times and got really hissy and growled a lot, she even swatted at him once. She keeps coming back to it once in a while. Oh well, I’ll try to get him use to it, if I don’t know if this is going to work.

huxleysmom said:
got really hissy and growled a lot, she even swatted at him once.
Click to expand...

...she's responding to his being upset. I'm REALLY keeping my fingers crossed that he calms down after a bit of time 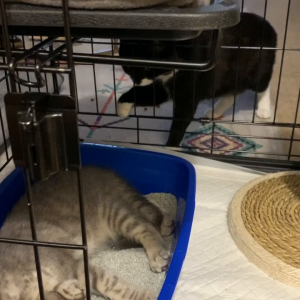 Is this good or is this a “let me check out my prey while it’s sleeping?

Oh Sophie, honey!!! Bless her little heart, my own heart just about burst at that paw stretched out like that - she's curious to the nth degree is what I'm thinking

She is really interested. Should I let her sit next to him and look at him for a long time? I don’t want her to think of him as prey.

Furballsmom said:
Oh Sophie, honey!!! Bless her little heart, my own heart just about burst at that paw stretched out like that - she's curious to the nth degree is what I'm thinking

huxleysmom said:
Should I let her sit next to him and look at him for a long time?
Click to expand...

I think you can, since he's oblivious

He has ZERO CLUE. Just looks at her and cooes. He excitedly jumps at the cage with a “ be my friend,please be my friend” energy.

Furballsmom said:
I think you can, since he's oblivious

lol, what a cat

Furballsmom said:
lol, what a cat

This morning Lance saw Sophie and ran towards her (he was stopped by the crate of course.) Sophie got scared however and ran growling the other way. We are clearly not there. I also gave her food in his bowl. She growled and walked away. It’s hard to imagine her accepting him. I know it’s not been long, but he is a foster, as nice as the rescue is, I don’t know if they’ll be able to give me the time it might take for her to accept him.

She’s definitely upset today. She growled and swatted at me when I put a towel with his scent close to her. She’s more agitated with him in the room more often. Not quite sure what to do.

So Lance went to the vet this afternoon to check on his eye that was getting worse and his diarrhea. Turns out he had a high fever and they are keeping him for a few days. His brother who was trapped a week after him has Coccidia, so that’s probably what the problem is. I wonder if she was so upset because she could smell he was sick. Although now she is sleeping on his blanket. Go figure.

I think you're absolutely right, she could tell something was wrong...
When he comes home, she may be cranky again since he'll smell like the vet. The vanilla extract trick might work if needed.

Vanilla trick? I read that rubbing him in a shirt of mine to at least cover him with my smell could help too. I hope he isn’t really sick.

Furballsmom said:
I think you're absolutely right, she could tell something was wrong...
When he comes home, she may be cranky again since he'll smell like the vet. The vanilla extract trick might work if needed.
Click to expand...