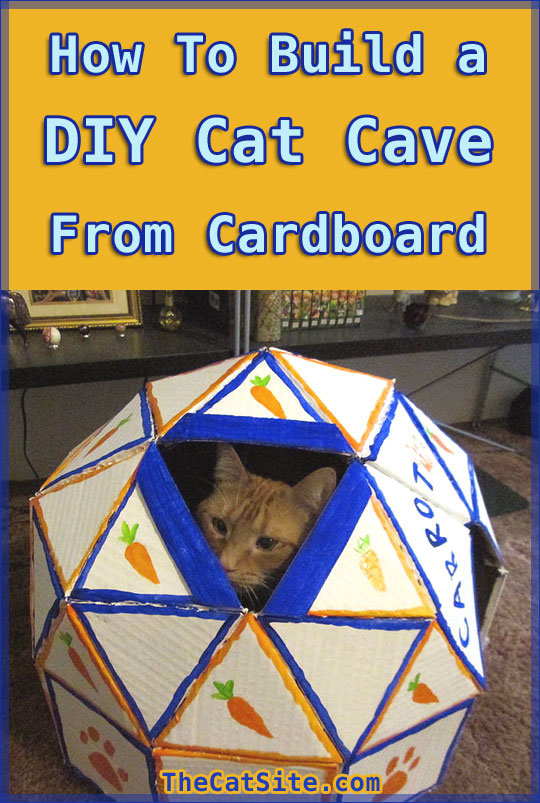 Written By TheCatSite.com Member NewYork1303
When we first brought Carrot home, I really wanted to spoil him and get him something really special. He was a cat who had been returned to the shelter twice before, once because of his chronically runny eyes and once because he behaved badly when a new family member was added. I was determined to give him the best forever home that we could provide. I wanted to buy him some kind of an indoor house to play in, but after looking at lots of different cat houses I decided that building one would be more fun. I could make the house more special this way as well. I started to look for information about how to build some kind of house out of cardboard since we had many cardboard boxes laying around as these are Carrot’s favorite things to play with.

I found an article about a person who had made a geodesic dome playhouse out of cardboard for their children to play in. I decided to try to make something like this, but on a smaller scale so that it would be more appropriate for a cat. I spent a day of my weekend just dedicated to creating a house for him out of cardboard. It was a lot of work, but worth it in the end.

For the purpose of house building I would need 30 AAB triangles 10 BBB triangles and 10 B squares. I used lengths of 5.5 inches for A and 6 inches for B. I knew that if I added a door and a window I wouldn’t need all of the shapes, but I decided that I would make them just in case. I only ended up using 8 BBB triangles and 9 B squares

I started by measuring out a pattern for each of the shapes and breaking down cardboard boxes that I had laying around the house. I drew the pattern onto the cardboard for all of the triangles and squares, spacing them apart and labeling them on what I decided was the least presentable side of the cardboard with what side was what length. When I cut them out, I added a half inch tab to each side of the shape so that I would be able to glue them together with these tabs. Once I had all of the shapes with their tabs cut out, I stacked them in groups with the shapes that were the same as them just to keep organized during the construction of the dome. Now that I had all of the shapes that I needed. I folded over the tabs toward the unpresentable side. To do this I used the tip of a ruler to make a crease and then folded along the crease. Then it was finally time to start the construction of the dome. To put the dome together, I first started by gluing 5 of the AAB triangles together along their A length sides to form a pentagon. I glued all of them together in sets of 5 so that I had 6 pentagons to work with. I then connected five of these pentagons by gluing one of the exposed B sides to one side of a BBB triangle and then gluing a second pentagon onto another B side of the triangle so that the pentagons were connected in a long string by the BBB triangles. With the last pentagon and the first pentagon in line, I left one side open so that there would be an empty triangle space for the top part of the door. Carrot had to help, so I don’t have any really great shots of the step. I then stood these up so that I could see a sort of star pattern open on the top of the dome. I glued the remaining BBB triangles into the triangle spaces left in the pattern, but left one of these triangles out so that I could have one window. I am glad that I did this since the window is perfect for playing. When Carrot is in his play house, I dangle toys through the window and he just goes nuts. I completed the dome by gluing the final pentagon to the edges of the BBB triangles on each side other than the one where the open window was. After this, I was left with the B squares which were glued to the bottom exposed sides of the dome leaving one square out under the place where I left a BBB triangle out for the door when gluing the pentagons to the triangles. After I had the completed house, I painted the entire thing with two coats of white paint which I allowed to dry. I then added color and designs to the outside of his house just to make it more decorative. True to proper cat etiquette Carrot ignored the house for several weeks before eventually starting to hang out and play in it. Now that we have a new kitten named Angua in the house, the playhouse has become even more fun since they will take turns hiding in it and jumping out to pounce on each other. This is a lot of fun for both Carrot and Angua. 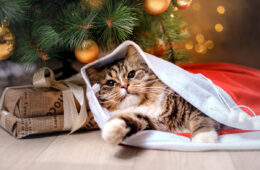 That is too cute
I used hot glue. It dries faster than anything else.
I need to get time ot make this for my cat and soon!
Cool! I've bookmarked the page so that I can make one for Jasmine. What kind of glue did you use? Margret
That is the most lovely idea ever. I would do something like that , only cause i have so many extra boxes too lol.
A bit of a synchronicity... I had put down "Men at Arms" about a half-hour ago and got on the computer to find out how to stop my 19 year old baby from throwing up his dinner the next morning. I started reading this article and saw the name Carrot and thought that was funny, but he was a ginger so I thought that was the source of the name. Then I read the name Angua and realized the source. Of course, he is ginger, so it fits perfectly. When I have chickens, I will name them Esme, Magrat, Agnes and Gytha, which I thought would fit perfectly. If one is particularly naughty she might have to be Perdita. Lovely house. Glad he finally took to it.
That is fabulous--and what a lucky kitty Carrot is to have someone like you who would take the time to make such a great toy for him!  :-)
We have a bunch of cardboard box caves in our house too. This is a great idea!!
This is geometric genius - I love it!
Congratulations on such a successful project!!! I love that your labor of love recycled those cardboard boxes. Thank you for being so generous with sharing the instructions :)
This is a fabulous way to revamp those boxes which have been worn out from being sat in.  I love this cat cave, it's a great creation NewYork1303.  Thank you for sharing how you made it.  :-D