Such thing as good quality and bad quality catnip?

I use Catnip Garden by Multipet and all my cat seems to do is eat it. He doesn't get energized by it at all, but he has with other brands of catnip in the past. My cat is 4 years old. I'm wondering if it's him or if it's the quality of the catnip. Has anyone noticed considerable variance in types of catnip on the market? He likes it enough to eat it, but he shows no mannerisms related to excitement and energy whatsoever.

My 3 cats eat it and roll around. That's it. There are different kinds of cat nip. Dont remember the name

Hi. I can't really help much because all Feeby really has ever done is eat it, or roll around on an item that has cat nip in it, as

maggie101 said. The only thing I know for you to do is to buy different brands and test each one of them with him. Make a chart so you know which ones he does or does not react to. If there is one that he does respond to, then you know the brands do make a difference. If not, it might be that he is basically no longer affected by it.
W

maggie101 said:
My 3 cats eat it and roll around. That's it. There are different kinds of cat nip. Dont remember the name
Click to expand...

Thank you for looking it up
D

I was just wondering about this the other day. Thanks for asking the question

I have tons of it growing wild. Sometimes after I mow the cats come over and roll around on my mowing shoes, lol. If you know what to look for, you should be able to find some growing wild around you too. Just try to find an area that doesn't get sprayed.

There are brands of "just the buds" catnip available but they're kind of pricey.

How do you know if it's good catnip?

This is Casper about two minutes after we brought him some fresh catnip home from the pet store: 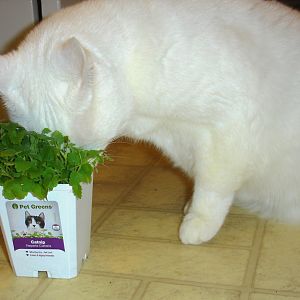 This is that same catnip pot about fifteen minutes later: 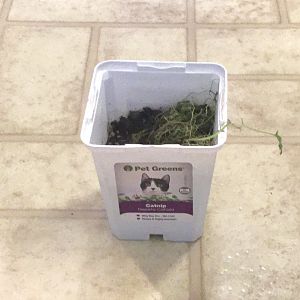 This is Casper about fifteen minutes after that: 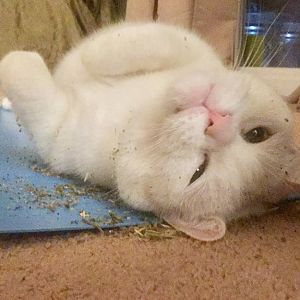 I have never seen a cat that's a bigger catnip fiend than Casper!
He literally eats the stuff by the mouthful!

Some cats are not affected by catnip at all. My first cat wasn't. Neko-chan goes wild over the yeoww brand catnip and toys.

Caspers Human said:
How do you know if it's good catnip?

This is Casper about two minutes after we brought him some fresh catnip home from the pet store:

This is that same catnip pot about fifteen minutes later:

This is Casper about fifteen minutes after that:

I have never seen a cat that's a bigger catnip fiend than Casper!
He literally eats the stuff by the mouthful!
Click to expand...

I grow the 'nip for my cats. I wait until it starts to flower to harvest the buds.

Yes, I understand. I was telling a funny story using pictures.

Dried or fresh, store bought or homegrown, I'd say that the best way to know which is the best catnip is to ask the cat.
In other words, give some of each kind to your cat and see which one he likes best.

Casper likes ALL catnip. It doesn't matter what kind. He reacts most strongly to fresh catnip but, regardless of the kind, if there is catnip, Casper will be along, shortly. I have never seen a cat that is such a fiend for catnip as Casper. He literally eats the stuff by the mouthful. Not just licking or nibbling. I mean "Om-Nom-nom! Chomp! Chomp! Gulp! Gulp!"

Cats lose their sensitivity to catnip with continued exposure. When they first smell it, they are attracted to it. Then they get excited and play with it. After about fifteen minutes, their senses get overloaded and they don't smell it as much. It takes a while for the effect to wear off before they will react again.

If your cat doesn't seem to react to catnip it might be because he's been overloaded. Maybe his tolerance is low.
It's like the way some people can drink a whole six-pack of beer but not get too drunk while other people get tipsy just from one beer. The same thing with cats and catnip. Maybe your cat is just a "lightweight."

That's actually how we keep Casper calm around catnip. We make sure that it's available all of the time. We put some in a bowl and keep it in a place he knows so that he can go there any time he wants. At first, he was like "Om-Nom-Nom!" Now, he's pretty casual about it. Every so often, he goes there and takes a few bites then it's cool about it.

If we bring out some catnip he still goes for it and plays with it. If we buy him some fresh catnip, it doesn't even last one day before he has mowed it down. However, if he has just had some catnip from his stash, he'll be "Ho-Hum" about it until the effects of what he's just eaten have worn off... anywhere from thirty minutes to an hour.

So, if you want to find out what kind of catnip is best, wait for a day or so without giving any catnip then try different kinds, making sure that there is enough time, in between, for the cat to recover.

Yes, I agree that different brands use different parts of the catnip plant and that could mean the difference in the way the cat reacts.
I also agree that some cats just don't seem to react to catnip, just the same way that some people like coffee but others don't.

Maybe you've got a cat that doesn't do catnip. I don't know... Ask him.

Carleton has never met catnip that he doesn't like - he literally goes bonkers for it.

I have found my cats react differently to different brands or even packages of the same brand.

I find most of it is overpriced and makes empty promises.

Our friends sometimes buy cat nip toys for Greg and Arnold. Often the cats barely play with them. Sad that good money is being wasted.

But fresh cat nip is another story!
S

Sarabi loves to roll in cat nip and it gives her the crazies! She also like silver one sticks, she won’t chew them but will rub her face in them and drool all over the place lol!
Augustus likes to chew silvervine sticks, but doesn’t care much for catnip.

LTS3 said:
You can also grow your own catnip and dry the leaves and know that they are fresh and more potent than any store bought dried catnip

This is what I do. There is a lot of Catnip (and various varieties of Mint) growing wild around my house so I just pick it through the spring and summer and dry some, and give some fresh to my Cats. The leaves can get quite large. *I think we should all move in with

The "Yeowww!" catnip toys are favorites here, as is anything from hauspanther.com. The dried leaves from the late, much lamented Drs. Foster & Smith were, and are, our favorites (I bought before they closed and still have a good supply secreted away in a cool, dark place). Catnip spray, and 50/50 catnip/silvervine, from Petco are popular, as is the 100% silvervine powder.

And yes, as with, uh, other things, homegrown can be very satisfying. My problem with that is that it immediately turns into the second photo posted by

Caspers Human no matter where I put it, inside or outside on the verandah.