Is the commercial succulent soil good? It's not really gritty but it says it drains freely. I didn't think of that for some reason :/. Well I mixed it with some sand and repotted everybody. Hope it works out. The standard is 1 part organic: 1 part grit, although depending on if you are in a more humid area, etc. some people go heavier on the grit.

Just saw your next posts. Good thinking! What kind of sand did you use? Course sand is recommended as opposed to play/fine sand because of the way water can drain through it. Hope that helps! The succulent mixes, weirdly enough, normally do not have enough grit. Not sure how they get away with marketing that it is, haha.

Try feeling the green Escherichia stem that is a different color at the base. Is it squishy at all or firm? If it is squishy, a beheading may be needed. The second picture is a little hard to see, but I believe I see a tad bit of wrinkling. If everything looks alright and roots and stem are not rotting, you can replant in a more gritty mix and leave a few days before watering. The few days gives the roots some time to recover as sometimes they get damaged during repotting.


The last picture, the wrinkling on the leaf is different how mine wrinkle. The wrinkle sees isolated to that one spot, while what I've seen with my plants the whole leaf will be a little shriveled or have creases in it. What do the leaves feel like? Are they stiff like they are full of water or flimsy and able to fold the leaf easily (don't actually fold the leaf, haha.... not sure how to describe that, ? Are the brown spots new? Those may be sunburn spots, so if they are new maybe try keeping the plant in a shadier spot.

Look at your new babies! So cute! I'll comment on names tomorrow and anything else I can think of, but relaxing before bed. I did post in previous posts an informative and easy to read article about what can be used for the organic and gritty parts for succulent mixes. If you aren't able to see it, I can see if I can repost the link again.

It is a fine sand, I don't have any grit around. I'll have to buy some and then repot if it seems advisable.

Lol, I just realized the new ones have their names on them. The little guys are golden sedum and the spiky one is aloe hybrid "starry night".

The bottom leaves on the pink one are limpish, but quite well-attached as I manhandled it a bit in the repotting process.

The green one feels pretty firm, but probably not as firm as it should be. Not squishy though. . .maybe like a wilted carrot? Haha, if anyone else has poked a wilted carrot. . .
C

W Willowy A material I like for adding drainage to potting mixes - Dry Stall is a pumice material. It's available at Tractor Supply and such places. Comes in a 40 pound bag for around $15 / $20.

You do NOT want Stall Dry which is diatomaceous earth and calcium montmorillonite clay (also known as calcium bentonite) in a granular form.

Another option is chick grit. This is a granite grit which comes in sizes from very small (chick size) all the way up to turkey. 5 pound bag for about $7. Tractor Supply again.

WillowMarie said:
Where do you get your quarzite? That sounds pretty! I've been looking for something other thank perlite or coarse sand to use, like some kind of rock type thind, but stuff at the hardware store seems too big. I'm using some old aquarium gravel to supplement some of the perlite and succulent soil mix because that is what I had on hand.

If they are not wrinkly, they should be still happy if you haven't watered them. I've read some lithops species may get enough from the air or just need to be sprayed and not a full water, while others do. Sounds like yours are doing well! Splitting is a good sign. They are doing their thing

Perlite is great until it inevitably floats to the top when you water your plants!

I got the quartzite at a farm supply store. It's called Cherry Stone chicken grit. I'm pretty sure it comes in different sizes. The size I have is slightly smaller than your average aquarium gravel.

I had a really hard time finding good sized crushed rock too until I thought to check that store. Everyone online says to use crushed granite or even turface, but I literally could not find any in person, or even at any online stores that would ship to Canada.

Thanks! I'll have to post pictures of my other lithops.

Moz I've been bottom watering, which helps with the soil not moving and separating differently. But I understand what you are saying with the perlite floating up! Perlite is the most common or only suggestion, too, when researching books or websites on succulent care, and is why I started with that. I'll looking forward to getting other stuff in the future.

That's a great tip on the Tractor Supply store. It doesn't seem available around me, but they do deliver and offer free delivery over a certain amount. You can also buy cat food and such to hit the amount for free delivery, haha.

I behedded my two succulents previously posted that had soft or weird looked stems. The roots were thrown out, but later while getting into bed I realized I should have kept the roots and lower stem just in case! I ran upstairs and dug a little through the top layer of garbage, but could not find them. Oh well... will just need to remember for next time. I was excited to see if anything should have grown from the bottom parts.

Time for some lithops pictures I just took. I decided to name them while writing this.

Unfortunately, I don't know which species or varieties any of these are. Every time I find one that looks like one of my lithops and I feel pretty confident about it, I'll find another one that looks just like it.

Also, sometimes I find it hard to tell how big lithops are in pictures. All of these are (or were, as in Angel's case) in the same sized pots. I put a dime next to a few for scale. This was my first lithops. I bought it in August 2018, it flowered for a few days in October 2018, and then it went to the great greenhouse in the sky last year. I'm not sure what happened to the poor thing or why it died. It was mauled by Tango once or twice (she loves pulling lithops out of the soil and dropping them on the floor) but maybe I didn't water it enough.

I miss it, which feels funny to say, but it was my first lithops ever, and I kept it alive long enough for it to flower. Taken today.
These ones are tiny. I believe I got these near the end of last summer, or maybe it was in the fall. I wish Pipsqueak would split! Bonus cat hair too, as all of my lithops sit on the same table the cats like to hang out on. This lithops, and the next one, were bought almost two months ago. Their roots were infested with some kind of larvae (maybe fungus gnat larvae), which I wasn't aware of until I brought them home and washed all the peat moss off. Red was also being munched on by the larvae, meaning some gross chunks were taken out of the leaves around the roots.

I couldn't return or exchange them, so they got a nice insecticidal soap root shower.

Before I took these pictures today, I took both ex-infested lithops out of the soil to make sure all the larvae were gone. I couldn't see any, so fingers crossed. The sides of Red are super wrinkly too and it's quite a bit shorter than it was when I got it. I'm not sure if I should water it yet. Watering lithops is sort of intimidating. This is lithops #3's friend who was bought the same day. I really like the colouring on this one. Sandy also had a larvae infestation around the roots, though it hadn't been chomped on very much in comparison to Red. Its sides are wrinkled as well, though not as dramatically as Red. I bought Casper last spring. It's splitting a lot slower than Tiny and Pipsqueak, but I believe in it!

Nothing new with any of mine. The air plants got soaked today. The succulents seem happy. I probably should grow some cat grass for Leroy. He loves it even though he always

it right back up

Succulents at the independent market today: 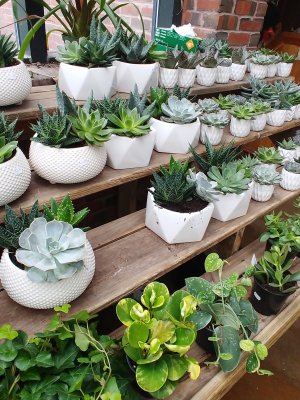 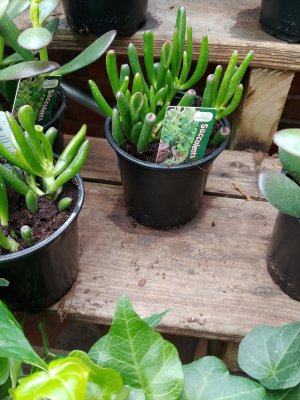 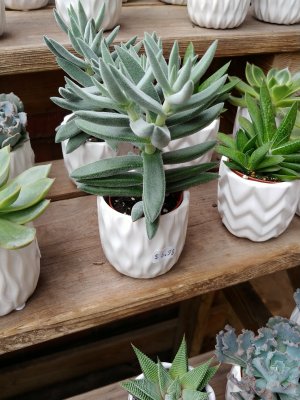 Any idea what succulent the second and third pictures are of? The label of the succulent in the second picture had no info other than how to grow instructions.
W

Ugh the Tractor Supply in my parents' town doesn't have chick grit OR Stall Dry. I'll have to see if Sioux Falls has it.

I popped into Walmart yesterday for just one thing and walked out with another succulent. I have an addiction! It looks rough---sunburned, dinged-up leaves, and the soil is very soggy. But it has a lot of babies and seems like a survivor, I admired its moxie, lol. I'll repot it after work and post some pics. This really has to be the last one, I don't have enough room for everyone indoors.
W

No, No, No! Not Stall Dry. You want Dry Stall. I know, horribly confusing.​
And if you think YOU have an addiction W Willowy ? Hah! Here's a link to https://www.google.com/url?sa=t&rct=j&q=&esrc=s&source=web&cd=&cad=rja&uact=8&ved=2ahUKEwjFwayNxKfqAhWtAp0JHaKcAKIQFjABegQIBBAB&url=https://query.nytimes.com/gst/fullpage.html?res=9504E2D6113DF930A15751C0A9659C8B63&usg=AOvVaw3_ckWwqvjRz5Byn68SFt2r a 2003 NY Times article about my dear friend Dr Gerald Barad (who passed away in 2016.) Now here was a man with a serious infatuation for these cacti and succulents. I'm attaching some images, taken from 2005 to 2011, just to show give you an idea. 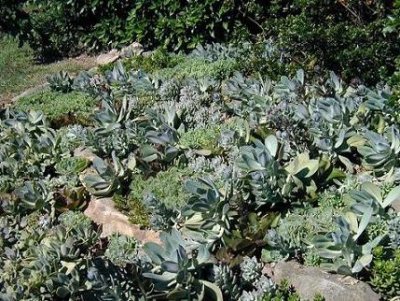 This was his summertime outdoor succulent garden, planted each spring from cuttings made in fall and kept in greenhouse over winter. Just in trays,
unpotted. Taken in 2005 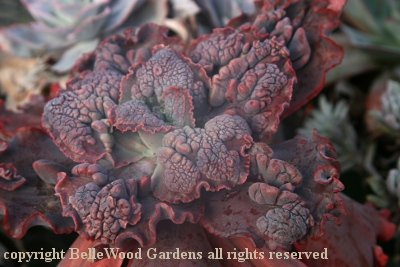 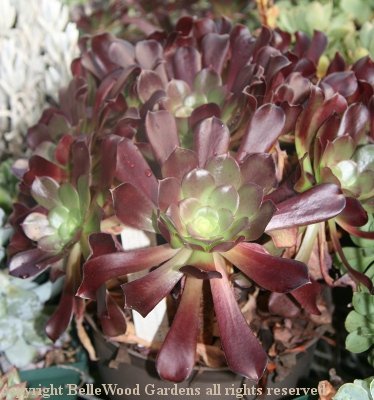 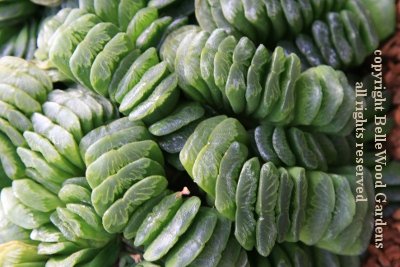 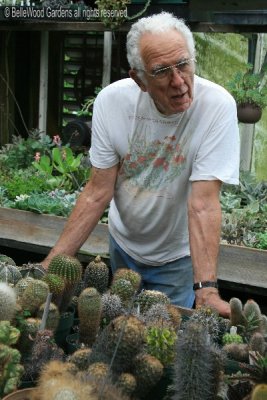 Dr Barad discoursing about the cacti in the greenhouse bench, in 2009

Understand that he was someone with the money to persue his passion. He had one person, full time, year-round, who took care of the garden and greenhouse, plus additional help in the growing season. One of the most delightful , unpretentious people it has ever been my good fortune and pleasure to know.
W

Well, they didn't have anything named any combination of "dry" and "stall" . I also don't see Dry Stall on their website so I wonder if they still carry it. Ah well, I'll probably get the chick grit anyway since it comes in a smaller bag.

This is the new one: I cut one of the babies off too: I thought it was another Escherichia but the pot says it's an Aeonium. And after I repotted it, I read that Aeoniums like regular potting soil and plenty of water. D'oh!

Google says the third one is a Crassula mesembryanthemoides

I bought three new indoor plants today (as well as a beardtongue, two torenia, and a thrift for outside): a tillandsia/air plant, another lithops (just a singleton), and a haworthia mutica.

) this morning. I found it lying on the floor, out of its pot, with holes in the leaves from cat teeth. After going about a year without ripping out one of my lithops, Tango figured it was time for another repotting.

Moz ! Sending good vibes to your lithops! My lithops were always a favorite of my cats to pull out, too. The struggle is real! Keep us updated