Our 5 month old looks so small

Our boy is coming up 5 months and still looks like such a kitten. He seems soooo small. Not sure on his weight at the moment. Hes the blue and white one. How big does everyone elses 5 month olds look?

This is just my opinion, but it may be that he is just a naturally small cat. My mom's cat, Misty, looked like a kitten for her entire twenty or so years of life. She had regular visits to the vet, and her weight remained at around 6 lbs. My Elsie also looks like a kitten, and she is a few years old now. She has a bit of a belly, because DH overfeeds, but her face, her other features are all kitten. If you are too concerned, you could contact the vet. A good way to weigh kittens (this is what we did with children who didn't want to stand on the scale at the doctor's office) is to step on holding the kitten. Then weigh yourself only. Your kitten's weight will show in the difference.

Some cats are just small. I have a 5 1/2 year old that is about that size and two 12-month-olds who are smaller. Girls tend to be smaller than boys. You just seem to have a small boy!

Iris (12 months), our smallest cat, and Cassian (9 months), one of our average size cats, with the same toy. Iris was just at the vet's two weeks ago. She weighed 4 lbs 11 oz. I do not think she has gained any weight since. Her sister is just a wee bit bigger. I would put her just over 5 lbs. (Freya, the largest of our small cats, is just over 6 lbs.) Xanthippe is smaller than her brothers, but she is not surprisingly small like the other three. 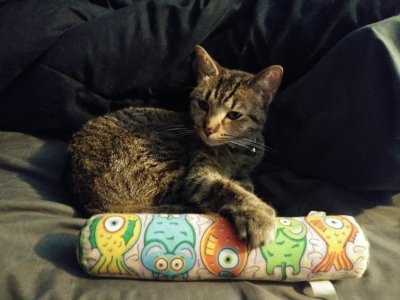 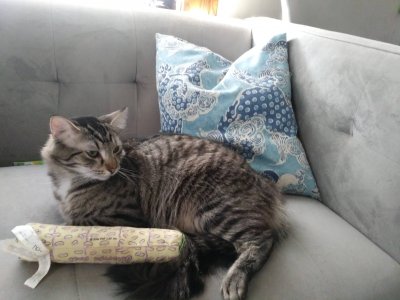 Five months is still a baby, though his weight should be around 5 pounds. However, as long as he eats, poops, and plays well he should be just fine. He looks healthy in the picture.

He looks normal to me for 5 months old. That's how old Mingo was when I got him, and he could perch on my arm held against my chest. That's still his preferred perch, but he weighs so much he falls off. I guess he was about 3/4 of his size now.

She is so cute, and yes a bit small but I think that’s normal for some

i have a small cat as well, it’s like having a kitten forever

this is her, fully grown

I at one point panicked and posted about a foster neonate that was SO much smaller then his brothers (Doom, named by his future parents)

He gained 12-13g a day while his siblings gained 24-30g...although he was eating and developing normally, his size really concerned me.

Now, at 4 weeks he is still SO much smaller (561g) compared to his brothers (658g), but you wouldn't know it. He is an absolute TERROR...attacks his brothers relentlessly, explores like he was a grown cat...he has NO FEAR.

So I think some kitties are just smaller...I'm guessing Doom had a different daddy then the other 3 because he for sure was not a runt. He is SMOLL but MIGHTY, just like your boy.

That's him in the middle Do you know for certain your kitty's age? I adopted what I was told was a 5-6 month old kitten last October. When I got her, she was 3.4 pounds and all ears. Vets later aged her more like 4 months at the time I adopted her (primarily based on her weight; I think she had her teeth). I think she was still a little underweight at the time, which makes sense because she was formerly feral and had worms and parasites. Thanks everyone. Yes we know for certain the date of birth. He suddenly looks very mature and a bit bigger now. Its like it happened overnight!!