I inherited a female cat seven years ago and she's now 12-14 years old now. But the last week she stopped using the litter box. I had just change it so it's clean and it's the SAME litter I've used all these years. Now she's dropping turds around the house and in the bed and recently started peeing in the bed.

She's an indoor cat 90% of the time. She'll go outside and sit on the porch in the morning a few hours, then come inside and sleep in the chair or bed the rest of the day. The evening, she'll repeat the process until I bring her in at dark. Sleeps in bed with me most nights.

Recently she stayed outside during the day for two days before I'd bring her in each night. Don't know it that triggered something. Out of character. And there's a couple of neighborhood cats that come up on the deck at night. Other than that, she's been normal. Purring as soon as you start to pet her.

Any thoughts? I'd like to exhaust all possibilities before I take her to the vet and rack up a huge bill. Not working, I can't afford that.

Hello and welcome to TCS. Sorry though for the reason that's brought you here.

I understand your hesitation to make a vet appointment due to your current financial situation, however, whenever a cat's litter box routine suddenly changes, a vet visit is the best first step, just to ensure there's not a UTI or other issue. Stress could cause the change, but stress also can cause UTIs.

Is she using the litter box at all? How is her appetite? Is the stool normal? Or dry, i.e. possibly constipated, or softer/diarrhea-like.

Because of her age, you don't want to wait too long, in case it is something serious that could worsen quickly, but you could try getting a 2nd litter box and putting it in a different location to see if that makes a difference. Or try Cat Attract litter. Also ensure you're using an enzyme cleaner where she pees, to get rid of the urine scent, otherwise she may keep going in the same spot.

Cats are really good at hiding their discomfort/illnesses, and even purring isn't a sure sign that all is well, as they can use purring to try to calm themselves.

Here's some TCS articles with more info, that may be helpful. Sending vibes that your cat feels better soon.

35 Signs That Your Cat May Be In Pain – TheCatSite Articles

At the first of the week, she was only peeing in the box. Now she's not doing that. Eating and drinking as normal. Stool is normal. Not dry but not runny either. I was planning a second box in the bedroom today.
Another irregularity, she's been more reclusive last couple of days. Spending the days under a dresser.
D

Didn't see an 'Edit' button after I posted. I'll check out the articles also, thanks.

djg618 said:
At the first of the week, she was only peeing in the box. Now she's not doing that. Eating and drinking as normal. Stool is normal. Not dry but not runny either. I was planning a second box in the bedroom today.
Another irregularity, she's been more reclusive last couple of days. Spending the days under a dresser.
Click to expand...

Hiding usually means they don't feel well or are in pain. They want to be left alone.

Maybe there's something here that might be of use;

No Money For Vet Care? How To Find Help And Save Your Cat's Life

djg618 said:
Another irregularity, she's been more reclusive last couple of days. Spending the days under a dresser.
Click to expand...

klunick already mentioned, that's usually a sign that they're not feeling well.


djg618 said:
Didn't see an 'Edit' button after I posted. I'll check out the articles also, thanks.
Click to expand...

Once you reach 20 posts and 5 days of membership, you'll be able to edit your posts for 120 minutes after submission.
D

I got the 2nd box set up near the bedroom (in the bath room). I finally found in her hiding spot after the storms today, she ate and drank and just spotted the original box. Keep an eye on the situation.

I know it's not what you want to hear but I would absolutely get her to the vet. Given her age and change in litter box behavior she really does need to be seen. Plus, she's hiding which is a clear indication of being sick and/or in pain.

You're all she has. She's counting on you.

We had a 17yr calico (she passed away a few years ago) that towards the end would do that. She would sometimes get to the litter and do her business just outside like she forgot what to do or she couldn't climb into the box. She started hiding more often also. I'm not saying that is what is happening but take in consideration her age, see if she is having problems moving about like climbing into the litter box, and please take her to the vet (see if they will work with you for the costs or if they know of an organization that will help you with the financial aspect).

I know how you feel. I've been there with wanting to figure things out before the vet visit myself, but in this situation it really sounds like something is going on. She might have a bug, or might have been injured. At her age it's probably ideal that you take her to the vet. Is it possible your vet will work out a payment arrangement with you?

Update: I took her to the vet today. Wow! Expensive! $275 and that's just for the exam and a urinary test. They wanted to do blood work and other tests, but I couldn't go for that now. And they couldn't even give me results today. Have to wait 4 days for the results. Then if it's a UTI, I've got to take her back in for antibiotics, etc. The vet in my hometown when I was growing up diagnosed my other cat's UTI with just a test strip. How things have changed. I'm in the wrong business. Let's hope this solves the problem.
Thanks for everyone's concern. 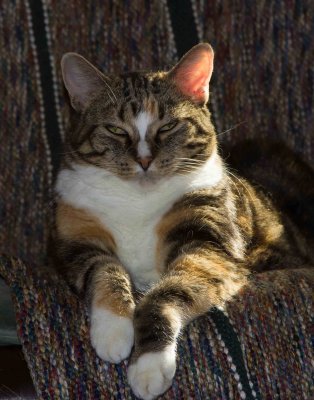 oh, what a gorgeous picture of her!

Furballsmom said:
oh, what a gorgeous picture of her!
Click to expand...

Paws crossed it's a UTI and easily treated.

Update: I took her to the vet and urinalysis test determined she did not have a UTI. Kidney function was perfect and there was no crystals in the urine. There was a little blood in the urine so a steroid was prescribed. The vet said the constipation could have started the ball rolling on the problem or some other type of stress (cat - stress? kind of an oxymoron). So I'm giving her Myralax (as suggested here also) and her droppings have become more normal. Unfortunately, she's still not using either box. The vet said Prozac would be the next step. Not sure that's going to happen. May just have to live with the problem.

Other than that, she's eating/drinking/acting normal. Follows me around the house/outside like normal. Daily droppings.

P.S. How in the hell do you give a cat a liquid by mouth via a syringe? I have to inject 0.5 ml into her mouth once a day and I'm getting pretty scratched up.

Try burritoing her in a towel. May have to be a two person job.
D

Yes I was going to se if the vet rented straight jackets.

This is something suggested when training a kitten to use a litter box, but I wonder if after she pees on the floor, if you used a tissue or paper towel to sop it up, then placed it in the litter box for her to smell. The idea, with kittens, is that they smell their own scent and learn that's where they're supposed to pee. Same thing when she poops on the floor.