Introducing cats after a traumatic event

Hey all. Unfortunately, Jumanji’s wonderful breeder very suddenly passed this Saturday. As such, we’ve all been in a flummox finding homes for her cats. Fortunately, homes have been found for everyone, but I didn’t have it in me to let Jumanji’s father, Chips, go to someone none of us (the breeders’ friends and graduate owners) knew particularly well, as we all want to make sure the rest of his life is lived as the breeder would have wanted.

As such, I’m finding myself taking in a second cat later today I wasn’t quite prepared for yet. Of course, I have all the essentials at home, as well as the budget to care for him, so there’s nothing critical to be done, as Chips is healthy, and has been neutered for a while now.

Mostly, I’m looking for some advice and insight on any precautions I may want to take considering the situation. Jumanji stayed with the breeder till she was 8 months, and her dad was neutered during a large part of her time living there (To clarify, the castrated cats lived with the young ones that graduated the nursery and were waiting for homes). As such, I do imaging they’d still be familiar with each other. Plus, from everything I’ve heard, really well-socialized cats from a breeder are usually a relative breeze to introduce.

That being said, even with being fairly young (he’s around 4 to 5 if memory serves), he did suffer a great loss, as he was the breeders favourite pet after he was castrated. I was hoping someone could provide me with some advice on how to aid the poor boy’s healing.
Last edited: Mar 7, 2021

Small update. Met the wonderful boy again, we made friends, and I’m taking him home now. He’ll need a dental done sometime soon, just to clean his teeth, but that can wait till he’s doing better emotionally.
Poor boy is barely an adult, turns 4 in late June. Hopefully his young age helps him adapt a bit more quickly

Poor boy meowed and panted all the way home, but seems to be doing better. He explored the office a bit, got a bit of cuddles and reassurance, and decided he needed some time behind the couch. He shows little to no interest in Jum so far, other than politely sniffing at her. Better than nothing! I think he might be remembering that he used to live with her, given that I took him home in her usual vet carrier. He doesn't seem interested in having any negative interactions with her, though I do know he's an affectionate boy, in general. Given the chance, he'll groom Jum the moment they get acquainted.

Jum is being surprisingly all right with everything so far, which is nice. She did some growling and hissing when I first brought him in, but I think it was mostly for show, out of fear. She's surprisingly relaxed at the moment, sitting with me in the living room. She's showing some signs of stress, but surprisingly nothing extreme. I imagine it'll take them a bit longer than normal it would normally with cats from the same breeder, given the situation.

I'll be playing referee for a while yet, but, fortunately, there seems to be no indication of imminent conflict :> Jum is mostly acting her usual self, so once she's a bit more confident, and Chips has had a chance to process the situation a bit more, I'll go and sit with him in the office when I have lunch ready, maybe watch a movie or something ^^

Things are going extremely well so far, surprisingly, though I'd still appreciate any thoughts and feedback. I want to point out here that I'm fully aware of the usual protocol of introducing cats, but given their dispositions, and their backgrounds, unless I see any real fear-driven aggression other than an occasional hiss or growl from Jum, I may not do a slow introduction. That said, depending on how Chips progresses with processing everything (and whether Jum has any non-negative interactions with him today), I may close him in the office overnight, just to be super safe. There's a litterbox, waterbowl, and some cat furniture in there, so he should be alright overnight.

Jum is pretty much totally back to normal. Just had her usual midday chicken neck, and is back to her usual affectionate self. Once I have lunch ready, I’ll go spend some non-invasive quality time with Chips. 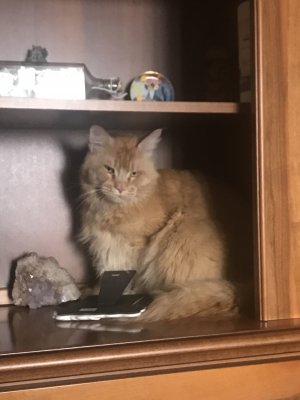 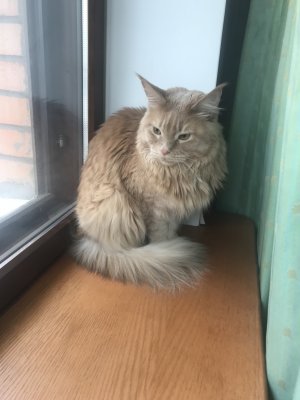