How can you tell when your cat is relaxed?--Post your pictures here MindyStClairesMom said:
What a sweet thing to say! She is quite new to us and we have been fattening her up! She was riddled with giardia (and probably lots of nutritional deficiencies) had a litter of 4 or 5 kittens by the time we got her (on her way back to the streets of San Jose fro whence she came. The woman who was supposed to return her just couldn't bring herself to do it. In the first picture below she had just had a litter of kittens and she's still a kitten herself 3 months later! When she arrived she was SUPER-awkward, didn't really know how to use her feet and food would fall out of her mouth when she tried to eat it, so she's come a long way. Though her name is Disco Janet, she is quite often just Bad Janet

You're definitely my kind of person, then! Good work! She bears little resemblance to that poor little waif.
I adopted our beloved angel Tarifa, who left us in August 2020 at 17, from a friend who did rescue/adoptions out of our local Petco. She was 11 months old and came highly recommended. I told my friend that we needed a very social, friendly kitten who would fit right in to a multi-cat family. Right away, she recommended her. From the moment she joined us until the moment she left us, she never fought, never met a cat or a person she didn't like, and was always the sweetest, friendliest, most personality-plus of cats. She is SORELY missed. I'd never thought about a tortoiseshell before I met her, as I'd never known one. Now, I can't stop thinking about a tortoiseshell.

dustydiamond1 said:
Can you rub tummys? Gysy likes getting rubbed from her nose to the tip of her tail.
Click to expand...

Only on a short time. Head and back are all ok, front paw sometimes, belly rarely, back legs are off limits

Hoboforeternity said:
Only on a short time. Head and back are all ok, front paw sometimes, belly rarely, back legs are off limits
Click to expand...

Yeah, you don't wanna mess with the back legs. And the back feet? Consider that a FELINy.

tarasgirl06 said:
Yeah, you don't wanna mess with the back legs. And the back feet? Consider that a FELINy.

Yeah, you touch it a little, they make that shaking movement as if shaking off stuck litter or dirt lol

Hoboforeternity said:
Yeah, you touch it a little, they make that shaking movement as if shaking off stuck litter or dirt lol
Click to expand...

Yeah. Right before the pincer effect comes into play and you get the teeth and claws. 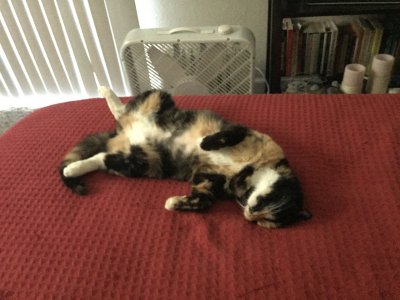 We got a portable AC unit later that day. 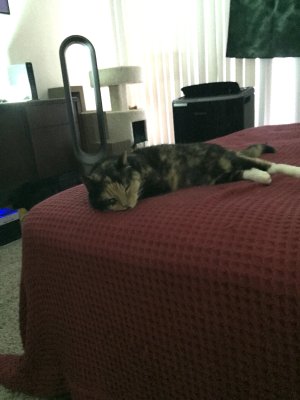 New item by Jmuhj Acat
A blast from the past: Sweet Baby Su with a new crocheted collar from her Aunt Julie and some of her favorite toys including her "catskwerl" and giggling eggplant (!) That is a VERY relaxed kitten. As only kittens can be. JulietteTruong ! Love your choice of bedding, too. Very complimentary! Here is a treasure from the past: A Three-FUR! Beloved angels Rani, Samuda, and Sammi, all very relaxed in THEIR room 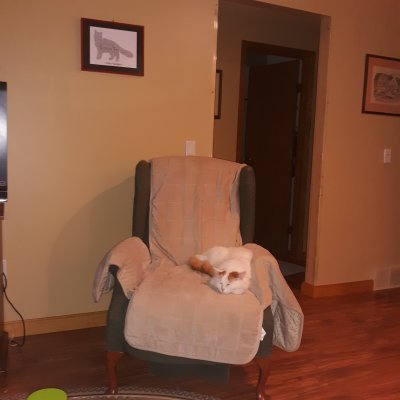