Here is the chicken gravies. The pouches are more liquid than the cans. I noticed that. Her highness barely let me put the plate down. 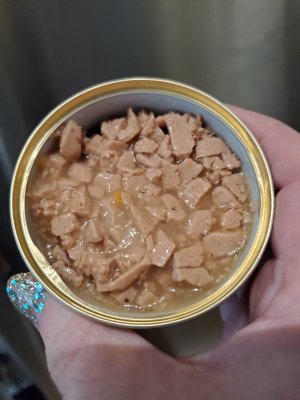 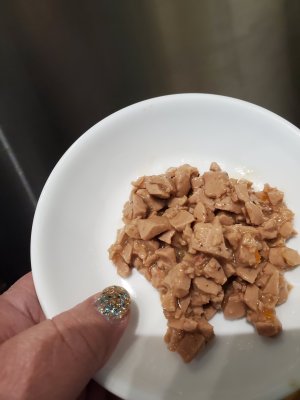 I don’t feed the fancy feast with gravy, I read somewhere along the way the gravies aren’t as good for cats but I don’t think any of Friskies or fancy feasts are really that great but it’s best that cats eat. I’ve tried so many different textures and brands, some they’ll eat once or twice and that’s it. It seems like the pates are a little better but my cats don’t like it.

Babypaws said:
I don’t feed the fancy feast with gravy, I read somewhere along the way the gravies aren’t as good for cats but I don’t think any of Friskies or fancy feasts are really that great but it’s best that cats eat. I’ve tried so many different textures and brands, some they’ll eat once or twice and that’s it. It seems like the pates are a little better but my cats don’t like it.
Click to expand...

FF wet gets a bad rap, buts it’s pretty good, especially for the price, so I wouldn’t worry! FF also has a line called Purely, which is a more expensive food with better ingredients overall — if the texture is similar enough to normal FF (I believe there are photos of it on their website), may be worth a try as a treat.

I checked the texture, looked good but none of my cats will eat the shredded chicken/beef.. I bought cans of Weruva and it was really good looking (real chicken) but cats walked away. My older cat will eat boiled chicken breast when I cook it but that’s it and she will eat some cooked ham but I don’t like giving it too often.

B babycakes , my cat ate Weruva Stews for about a month but then wouldn't touch them. The newer batches almost seem more watery/greasy. She also was the same with BFF OMG except always left a bit of the tuna behind. In a way, I'm glad because these are all predatory fish based foods.

The fancy feast gravy doesn't contain fish. The worst ingredients are the corn and wheat. Honestly I'm not sure how bad grain really is. The other veggies they throw in as replacement thickener in premium food are high carbs and not species appropriate either. By-products don't bother me so much since cats eat organ meat. I just want her to have more choices she actually likes so she doesn't get bored or if there are shortages.

I forgot to provide an update on this. I tried the Wellness Chicken gravies. While she did eat a lot of it, I think it was too meaty for her and she left a couple tablespoons of meat behind. I could only get the canned version at Pet Supplies Plus. Is the pouch version more gravy and less meat?

I also tried Tiny Tiger Extra Gravy. Again, she likes the gravy but leaves a lot of meat behind. Since I have a case of it, I may run it through a food processor. She’s missing a few teeth so I think it’s hard for her to chew. The fancy feast pieces are a bit smaller, more of a flaked texture. She always eats the meat from the Fancy Feast, though it takes her around 12 hours eat it - she’s very much a grazer, I think because of her past hoarder cat background.

The search for more variety for Little Miss continues. For now, she continue to be the gravy lovers queen. I may try Wholehearted Extra Gravy pouches at some point. That’s the next one of my lists of foods to try on her.

I know most of these are carb heavy foods. I have her on Instinct Ultimate Protein to balance things out. I actually lucked out and found Dr. Elsey’s dry chicken in stock at Amazon and with a 40% coupon for subscribe and save. I’ve been trying to get this for months and will be mixing with the Ultimate Protein (I have basically a whole bag so a lot of mixing for a while). She has 2 cat fountains to help with hydration part (I just added 1 recently near her favorite window perch).
Last edited: Jun 19, 2021
You must log in or register to reply here.
Share:
Facebook Twitter Reddit Pinterest Tumblr WhatsApp Email Link