Do your cats have favorite toys?

Maisie loves this oddly shaped silicone green ball that the shelter actually gave me because they knew it was her favorite. Two years later and it's still her favorite. She also liked this ping pong ball meant to look like an eyeball but I accidentally stepped on it a few weeks ago and broke it.

Remy likes these white mice I get from the grocery store. They come in multipacks with different colors but he only likes the white ones. They also both like this one mouse that is white and purple and has been pretty durable considering how much they play with it. I want to find some more but I don't even know where I got that one.

Oh yes. Hima has these two 4-5 cm mouse toys that make sound. Not a bell sound, she hates the bell sound toys. It's a sound like there is sand in them. She already likes all kinds of mouse toys more but those two are her favorites both because of the size (she can catch them in the air) and their sound.
Though, sometimes her favorite is any tennis size or smaller ball she can chase

P.S. Her least favorite two toys are the two most expensive ones!

Neko-chan loves interactive play time with her wand toy. She's also obsessed with this little stuffed teddy bear it's about 3 inches. She also likes those little shiny puff balls that kind of sound like plastic bags. She also drags this one strip of fabric around that ripped off my pajamas.

Bynx loves wand toys and will carry them around with him. The one he likes to bring with him the most is covered in fabric and has a small mouse on the end, the stick has a plush cat face and little bell at the end where the string (folded and sewn fabric) comes out.
Lily loves her "rainbow snake" (which is what I call it). It's a rainbow colored foot long fuzzy material thing that used to be on the end of a wand toy that got destroyed. She also has a few plush catnip toys she enjoys.
Chester will play with anything...I don't think he has a favorite...

Luna, springs! Cheap for us = hours of fun for her. She will play fetch with them, fling them around the house by herself, hide them, tell us where they are hidden and then make us fetch them lol. We have a box full of toys that she can pick from and usually the springs are the ones she goes after.

She also like the little fuzzy balls a lot and treats those in similar fashion.

There's a few catnip and silvervine filled items that make noises she also loves (now that she's reactive to it).

She's also wild about any wand type toy to the point of wearing us out completely. I don't think she has a specific favorite - they are all equally as good to her. But she's a kitten so anything is a toy and worthwhile.

Cocoabean doesn't play much. Up until about a year ago she used to enjoy toys but something about losing our old boy Casper took some of the spark out of her or maybe it is just her age catching up with her (we really don't know how old she is - we put her around 11ish but she could be more). She really isn't very play oriented at this point although sometimes she'll enjoy a wand toy and there's one furry ball on a rope which she likes to "kill" as we drag it around, but she's chonky and likes to just loll and nap a lot; chasing stuff isn't her thing anymore. Give her a pile of catnip and that's good for her

MonaLyssa33 said:
Maisie loves this oddly shaped silicone green ball that the shelter actually gave me because they knew it was her favorite. Two years later and it's still her favorite. She also liked this ping pong ball meant to look like an eyeball but I accidentally stepped on it a few weeks ago and broke it.

Remy likes these white mice I get from the grocery store. They come in multipacks with different colors but he only likes the white ones. They also both like this one mouse that is white and purple and has been pretty durable considering how much they play with it. I want to find some more but I don't even know where I got that one.
Click to expand...

Try taking a photo of that mouse toy and do a reverse Google image search. You may be able to locate it that way

Kitty on the half shell, tortie power!

Olive is a sucker for packing paper - like the kind that comes from Chewy boxes. Less of a toy and more of a Fort/ambush location. She hides in them, runs and leaps into them, and uses them for cover to hunt toys or Gohan.

Gohan loves those cheap little mice that are a plastic cone covered in felt. The weight of it seems right to him and he will carry them around the house and occasionally drop one at my fiancé’s feet as a sacrifice to get rid of Olive. He also loves this felt bug toy that we got just for the wand. He loves that thing.

Snowball ...one of his favorite toys is his Smarty Kat Mooshoo LOVES a little blue stuffed corduroy mouse. I've had to restuff it 2-3 times and sew it back up. She bats it, chases it, throws it, lays beside it. No, not the red one she says. Not the other ones made of different material. Not a new one. Her blue one that's been around for 18 months. 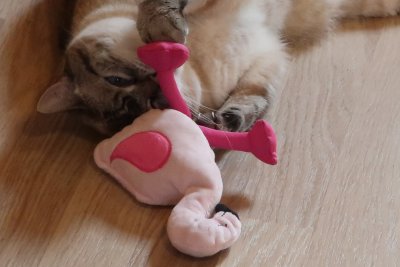 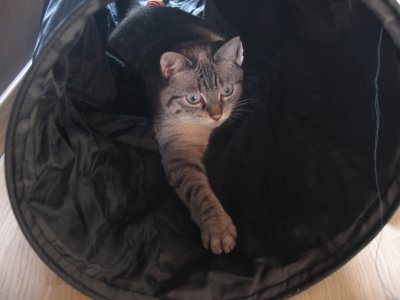 My mom made a toy box for her cat (basically a shoe box) that has all her toys. The cat will rummage and pull out and toss the toys she is not interested in until she find the right one for that day. It is very cute

Lily's favorite is a squirrel with a bushy tail. It used to be stuffed with catnip balls, but they fell out. She doesn't care; she carries it around and tosses it in the air so she can pounce on it. Mingo loves the springs, and bats them around the kitchen. The stove must be the hockey goal. When the springs all disappear, I take a yardstick and pull out a dozen or more of them from underneath it. He loves Da Bird, too, but it tires him out now that he's middle-aged.

Patches favourite toy is a carrot it came on a wand but I took it off for him he likes to chuck it in the air. I have got another one put away for him because they go fast from the shop when they are in stock.

Normal stuffed toys Blue doesnt play with, just tears them up, his favourite toys are shoelaces, ping pong balls and his tennis ball. 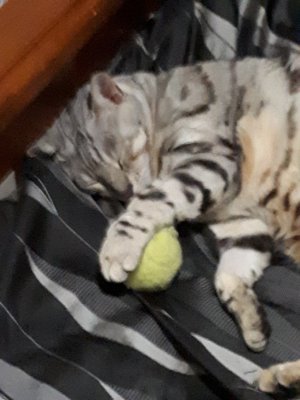 Two of our nine have favorite toys. Estella's is a leg from a stuffed animal void of stuffing. The toy belonged to my friend's dog who tore off the leg, which was thrown away. Estella got it out of the trash. That was in 2014. She carries it around and defends it from the other cats. Tara's is a stuffed spider with one missing leg.

When we adopted Jasper, the first thing we did was go and pick up some stuffed toys so that he could have some comfort objects. He enjoys playing with his little bell balls, but by far his loofa stuffy is his favorite. He snuggles with it, plays with it, totes it around in his mouth, it's adorable. I dread the day we might have to chuck it once he wears it out. Sammy (my tuxedo) used to have a loofa toy that he LOVED, but we had to get rid of it because it was so beat up, smelly and couldn't be washed. He's not big on toys anymore though. He has this strange obsessive behavior with toys with catnip. He holds it in his mouth and very possessively growls at anyone who gets near him. I've had to pry it out of his mouth before. He goes from sweet cat to pure evil. We don't really let him have catnip toys anymore (thankfully he doesn't seem to care about the kittens loofa) -- and since that seems to be all there is almost, we only get him balls and trees, which he's just not interested in.

Isabel is older and honestly, just wants to chill. She has toys, she just never plays with them.

Socks doesnt as she's not very into toys. Izzy likes anything on a string, an old shoelace will do too. Mittens prefers rolled up sweaty socks to toys. Amber goes through stages, at the moment it is a blue owl with a feather on the top, she walks around the house meowing and carrying it. Teddy has not found a toy he doesnt like yet, but gets so possessive of wand toys he can only play with them on his own, as he does not let the other cats play and growls when he catches it and doesnt let go.

All 4 of mine have very different taste.

Lupine likes stick toys with feathers on the ends, he likes to 'catch' them, carry them around and everyone sure needs to know what a good job he has done. He will show every cat and human in the house his 'catch' whilst yelling at the top of his voice with it in his mouth still.

Jarppi used to love cheap mice toys when he was young but now he likes large kicking toys now that he is older.

Peanut loves long feather toys, he likes to lick them until the sodden and carry them to what ever room we are in.

Truffle likes tiny toys he can carry around and bring to us to throw for him, he has a tiny teddy and lizard that are his favorites.

Little tiny pillow about half the size of a sheet of paper. Made it for him out of an old quilt when he was a baby. Thin, soft fabric. Nothing about it is even remotely durable.
It's all flattened out and smashed now. But he still carries it around with him and wherever he slept last, that's where it is.
As for other toys? Obliterated within 30 minutes.

Willow really loves balls but usually there aren’t any around because she rolls them into closets and furniture. I pull them out and they are gone again within a day. So her second favorite are cat springs and she usually has a few to play with only because I have bought her over the years nearly a hundred of them . She also loves knocking them down the hardwood hallway and into closets but about half the time is able to fish them back out again, I don’t think there is a bed, piece of furniture, appliance or closet without a few springs.
You must log in or register to reply here.
Share:
Facebook Twitter Reddit Pinterest Tumblr WhatsApp Email Link