Balinese Dad & Unknown Mom? What Am I?

Hello! I'm new to the forums and this is my first post! I was curious is finding out some info on a new kitten I just got on Friday. She is about 8 weeks old and the previous owner said she is a seal point Balinese/Himalayan mix. She did mention however that that she'd never seen one with such a white face but darker shading in the other areas. Here's a couple of photos of her: 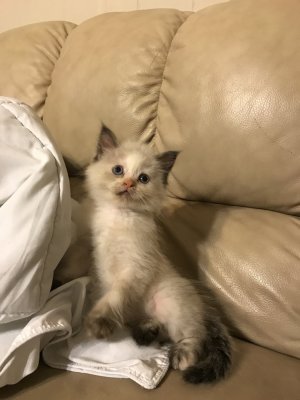 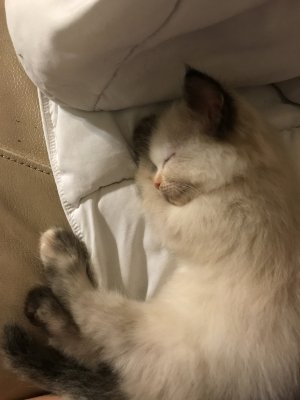 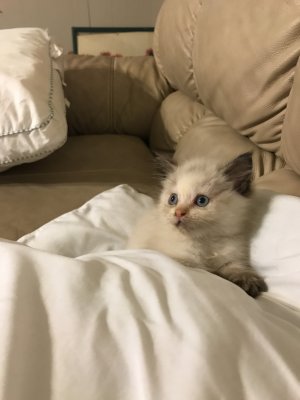 Here is the photo of her dad, which the owner described as a Balinese: 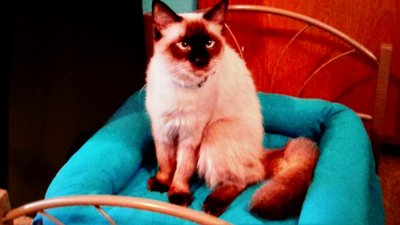 And her mom which the owner described as a Persian, though she appears to have maybe have some kind of colorpoint? Perhaps cream. 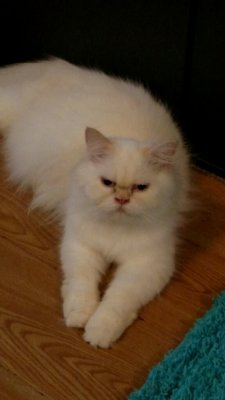 My girl (still can't decide on a name!) has three brothers that all came out cream point. I think she's a tortie of some sort cause her feet and ears look a bit more mixed with a few shades of grey/cream. Her tail however is a drastically darker shade of grey and mostly solid with silver-gray scattered throughout. What I do know about seal points (my aunt had one) is that they have an almost black nose and paws. She has a pink nose and her feet are mostly a dark purple with a few little splotches of pink. I'm just curious if anyone has any idea what her coloring is actually called and whether she'd be considered a true Himalayan or a simple a Himmie/Balinese mix. Thanks for any help!

Mom looks like a cream point Persian (could also be called a cream point Himalayan). Dad looks like a seal point Balinese, in the old style. The kitten would be a Domestic Longhair, therefore, (any mix or cat without papers is a Domestic Short/Medium/Longhair). She looks like a tortie point, which would make sense considering the colors of her parents. Very cute for sure!

Thanks so much! Glad I guess the tortie part right. What still stumps me is if she has more of a blue tint in her fur, why would her nose be pink (I thought blues had more of dark grey nose & foot pads). I did read that lilacs generally have pink noses with a mixed pink/mauve pads which matches her description but her points seem too dark to be considered a lilac.

The white spot onher face, is it white or. Creme? If white one of the parents
Must have white spots too. Prob mom. 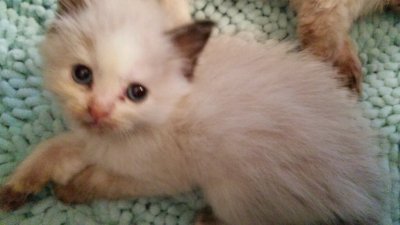 she has the white going up between her eyes and forehead. Then there's a more cream color around the base of her ears and mouth. I just got her two days ago and I've already noticed there's been a little bit more darkening of that cream area so now it looks like she has a white pentagon shaped spot in the middle of her forehead.
W

I would guess the parents aren't purebred. The father, especially, looks like a domestic shorthair. The mother obviously has some Persian/Himalayan background (the snub nose is lost after just a couple generations of outbreeding) so she may be purebred, though not show quality. With the parents being those colors, yes, all female kittens will be tortie point; it's the only option.

The kitten seems to be a pointed bicolor like a Ragdoll. So the white spotting gene must have sneaked in somewhere. If the parents aren't purebred this is pretty normal. The father doesn't seem to have any white spots but the mother might, hidden by her light coloring. If there's white spotting on her nose, that will make the nose leather pink instead of dark colored, same for the paw pads.

Thanks so much for the info! All this is so fascinating to me so I've been enjoying learning about all this.

Also would the dad still have siamese in him cause she certainly has the personality for it. I have never heard a kitten talk as much as she has! Such a distinctive little voice compared to the chirps my older cats used to make and she just loves to talk and talk and talk. Lol

.
Maybe it's my monitor settings, but what I'm seeing is that Mom's a Shell Cameo Persian or one heckuva good lookalike, and Dad's a pet quality Balinese. I don't see any distinct pointing on Mom, but she clearly carries Peke-Faced Persian ancestry based on her muzzle conformation.

ss9lr - your kitten's ancestry makes her a colourpointed Domestic Long Hair, but her heritage recalls some of the great breeding programs of the first half of the twentieth century. Those familiar with the original research article in the Journal Of Heredity in the 1930s will recall that the "Siamese-Persian" begun at Harvard College by Clyde Keeler and Virginia Cobb (based on several breeders' efforts to transmit the Cs allele to long-haired cats in the late 1920s) was picked up by three different European breeders and by two Americans as well, intent upon finding a long-haired Siamese (or a Colourpoint Persian, if one prefers) which would breed true, and the modern "Himalayan" was the result of Webb, Harding and van Wessem's many years' labours.

While the notes of the two British breeders are extant and quite clear (their breeding was done solely with Persian and Siamese bloodlines), Regina van Wessem's notes aren't archived, and there's considerable supposition that she was at least a correspondent (if not a client) of both Helen Smith (who coined the name, "Balinese") and Marion Dorsey - both of whom were breeding long-haired Siamese in the days after World War II ended - and it seems entirely possible that Ms. van Wessem might have added Ms. Smith's or (more likely) Ms. Dorsey (who added Turkish Angora bloodlines into her own long-haired Siamese program)'s bloodlines to her own program. The divergence of the two lines (one brachycephalic owed to strictly Persian ancestry - becoming the so-called "Himalayan," and the other dolocephalic, owed to the Angora replacing the Persian, becoming the Balinese) have given us the modern day Colourpoint Persian and the (Traditional) Balinese which we encounter at shows across the globe.

I'd be interested in seeing how your kitten's mask changes, and if it will match her other points (Seal Point masks are usually quick to make themselves evident, and you're quite right about the colour of the nose leather and paw pads being "different" from the usual expectation) and her coat length at maturity, and I've no doubt the

StefanZ are equally interested as they both, no doubt, are very familiar with the past quest for variations on the long-haired Siamese.
.

Thanks so much for that info. Very interesting! You're right that the mother definitely doesn't have any color point other than in her face so it's certainly likely that she's simply a Persian. If her coloring is cream (not sure whether she'd be considered a solid cream or not) then I'm assuming my kitty will have either blue cream or tortie point. Honestly, aside from the more recognizable seal,chocolate & cream points - all of the other possible variations look too similar for me to distinguish. The coloring she has now looks like she could fall into several categories but I think based on her parents, only the tortie and blue cream are possible. I'm excited to see how she actually changes as she gets older, in the week I've had her, she's already showing a bit more darkening at the top of her had and along her back.
You must log in or register to reply here.
Share:
Facebook Twitter Reddit Pinterest Tumblr WhatsApp Email Link