Coconut oil has gained popularity in recent years, touted by some as a “super food” to be included in our diet. It’s hardly surprising that there are now voices suggesting we should supplement our cats’ diet with coconut oil as well.

But is that a good idea?

We all want the best possible nutrition for our cats. Whether you choose a dry, canned or possibly even homemade diet – if you’re wondering about supplementing with coconut oil, then this article is for you.

What coconut oil actually is

The coconut is the fruit produced by certain types of palm trees. Naturally growing along equatorial coastlines across the globe, coconuts provide local inhabitants with a rich source of nutrients as well as materials for furnishing and decorating.

While coconut oil is entirely plant-based, it is high in saturated fats. Unlike saturated fats from animal sources, coconut oil contains shorter chains of fatty acids. This could make coconut oil easier to digest in humans and animals that suffer from certain medical conditions. Other than that, coconut oil mostly delivers calories and has properties similar to those of other oils and fats.

Is coconut oil natural for cats?

For humans living in the tropics, coconut is often a staple food. They consume large amounts of the fruit – including its oil – with no ill effect. However, as we all know, cats are obligate carnivores, and no plant-based oil can be a “natural” ingredient in a feline’s diet.

This does not mean cats cannot consume coconut or that it’s harmful to them in any way, only that it should not be touted as a “natural” food ingredient. Where cats are concerned, coconut oil is not only highly processed, it’s also not species-appropriate. There’s nothing natural in supplementing a cat’s diet with coconut oil.

If you search the internet for the combination “coconut oil and cats” you will soon come across dozens of suggestions for using coconut oil in cats. Many discuss its use as a nutritional supplement for a variety of illnesses including skin disorders, gingivitis, constipation and many others. Some advocate its use as a topical remedy for a variety of conditions including fleas, fungal or bacterial infections and even exposure to the elements.

Unfortunately, there is no evidence that shows that coconut oil is in fact effective in treating most of these conditions. The exception would be certain GI tract conditions where the shorter medium-chain triglycerides may be more easily absorbed in the cat’s intestines. Even then, the oil is used not as medication, but as a way to supplement the diet with extra calories in a way that may be more effective.

Pet nutritionist Dr. Martha Cline, DVM (Diplomate ACVN), told us that she sometimes uses coconut oil in cats to treat such conditions. “In some animals that potentially have malabsorption or maldigestion disorders, coconut oil could be beneficial,” said Dr. Cline.

Even if you suspect your cat suffers from GI problems, do not supplement with coconut oil without discussing this with your vet first. A lot depends on the specific diagnosis and the cat’s overall condition. Supplementing a sick cat with anything should only be done as part of an overall veterinarian-supervised treatment.

There is no indication that coconut oil is toxic to cats. It is considered safe for healthy cats when consumed in small amounts.

So why is it on the list of foods that the ASPCA suggests we should avoid feeding our cats? The ASPCA does say that “when ingested in small amounts, coconut and coconut-based products are not likely to cause serious harm to your pet.” However, like most oils, coconut oil can make the food move along more quickly in your pet’s stomach, leading to upset stomach and diarrhea.

There’s another risk associated with supplementing your cat’s diet with coconut oil though: weight gain. As Dr. Cline told TheCatSite, supplementing the diet of healthy cats with too much coconut oil can lead to an unbalanced diet and even obesity. “It’s not something I would recommend that an owner add to a healthy animal’s diet”, she said, adding that “90% of an animal’s total calorie intake should come from a complete and balanced diet. If you’re adding a lot of coconut oil you may skew that percentage.”

Read more: Unbalanced Diets – Are You Killing Your Cat With Kindness?

Fortunately, no, they don’t. In this study, cats showed clear aversion to a diet that contained coconut oil. So much so that the cats preferred to go hungry and lost weight on a food supplemented with coconut oil, compared to cats fed regular cat food.

So, should you give your cat coconut oil?

In the end, this is a personal choice. As long as your cat is healthy and you’re only adding a small amount of coconut oil to a complete and balanced diet, you’re probably not harming your cat. Just keep the following in mind –

If your cat is healthy, he or she probably doesn’t need supplementation with coconut oil, but a small amount won’t hurt them. If Kitty is ill, please don’t turn to self-medicating them at home with coconut oil or any other substance. It will most likely not help them and could mean delaying much-needed veterinary treatment.

To stay on the safe side, always consult with your veterinarian before supplementing your cat’s diet with anything, including coconut oil.

Read more: Alternative Treatments For Cats: How To Minimize The Risk

Over to you, have you ever tried giving your cat coconut oil? Leave a comment and let us know how it went! 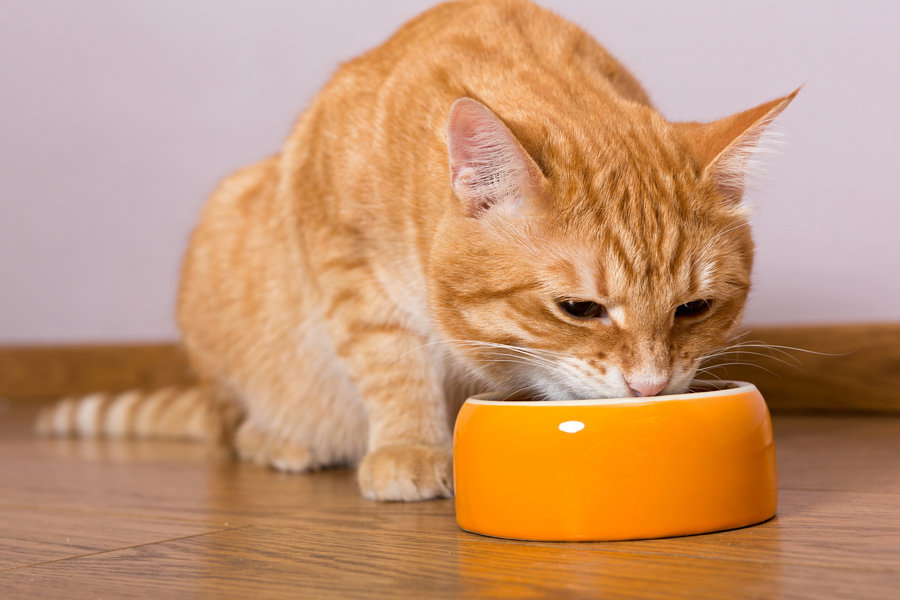 How To Choose The Right Food For Your Cat 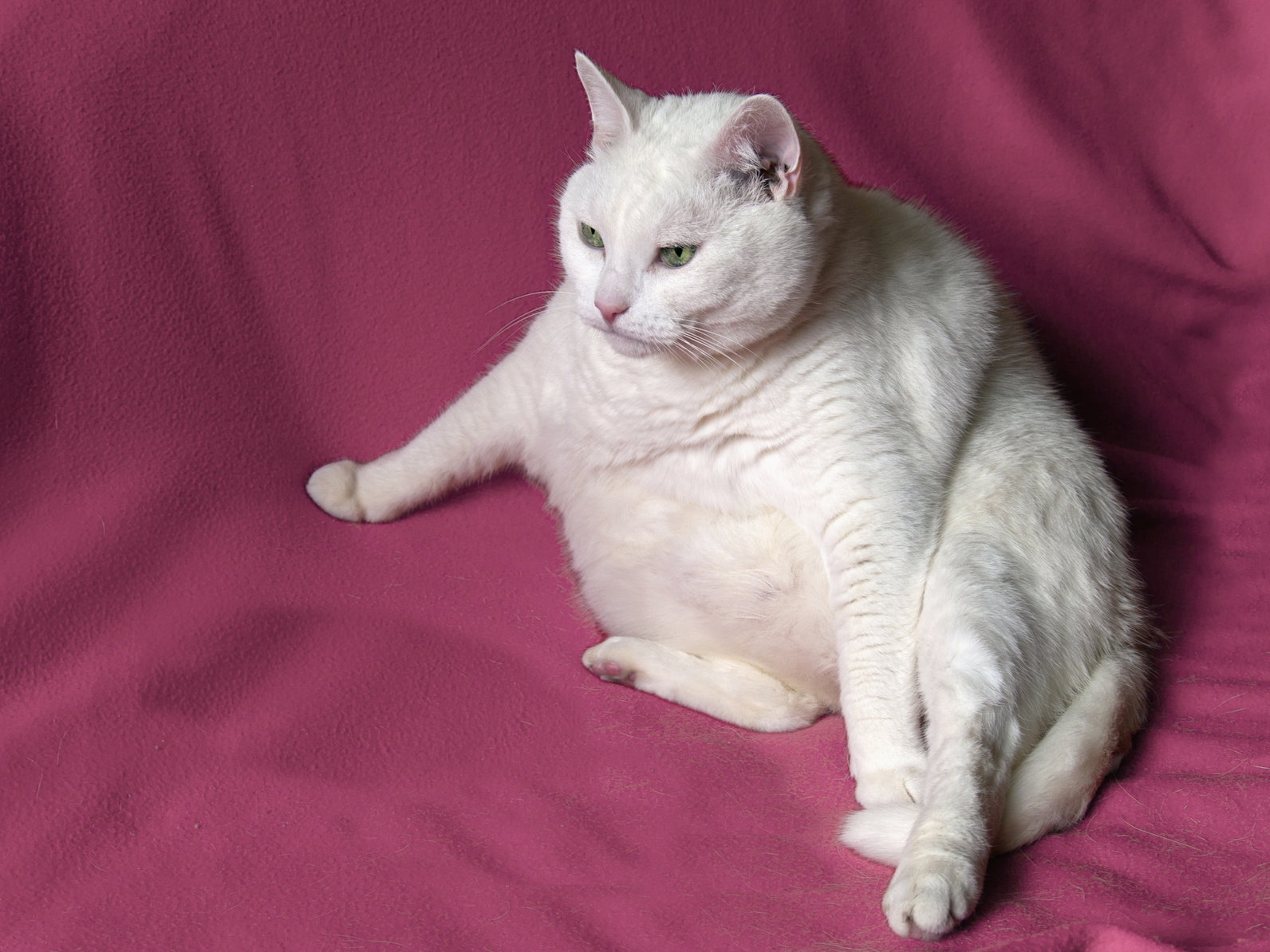 Is Your Cat Overweight?

15 comments on “Should You Add Coconut Oil To Your Cat’s Food?”

I have 4 cats 2 like to lick a bit from a bowl I leave some in for them, the other 2 no way will they get any. Its funny. I have used it for skin irritation on one , it worked very well. Like the idea to use on bottom if necessary.
I am a soapmaker and buy my oils in bulk. So I usually have a 50 lb bulk container of coconut oil or two in stock. So one day I have the lid off while I was scooping out some coconut oil for soaping. So my Gypsy had never seen this pail open before since she is fairly newly adopted from the shelter. She creeps up to the edge of the pail and peers over the edge. Next thing I know her paw is busy trying to reach in and get a little sample. It was kind of comical because the pail is about 5 times her size and dwarfs her and all I see is this furry white paw reaching in and trying to score a paw full of coconut oil! She did manage to get a piece and flung it across the room before she started to lick the paw!
My cat loves the coconut oil I use for my skin and hair. It works really well on a cotton swab for cleaning out his nose as well if there is any dried boogies.

My cat LOVES it. She tries to lick it off my legs when I'm shaving! I give her a little on my finger normally, and she once scratched my hubby's butt because she wanted it and he didn't know to give it to her!

Cats loooove it. Or at least some do, they love how it smells
I thought it is great for hairball prevention and cats love it! Just a little dab on their coat once a week or so. I've used it to get a soft coat too, you can't shampoo.
Atticus and Thirteen don't care for it at all.

I figure it's not species appropriate as fish or krill oil, but if we offer it and the cats eat it and like it, there's little harm as it's a very small part of their diet! I offer ground (finely, from a juicer) veggie pulp a few times a week to our cats. It's usually a mixture of various greens, with cucumber, parsley and occasionally carrots. A few cats love it, the rest do not. If they need it, or like it, they eat it. If they don't, the dogs suck it down like it's their last meal LOL
I’m confused! It says cats don’t like coconut oil, but my best bud’s cat goes crazy for it. And I’m seeing plenty of comments about other cats loving it down here too! Hmmm :headscratch:
Processed or not, and even without "proof", I still find this works for dental care better than any pet toothpaste on the market...
My cat loved the taste of coconut oil and would beg for it! I would only give it to him once in a while...it actually helped his coat to be shinier and he enjoyed it as a treat!
Those whom use coconut oil, typically do use coldpressed / "virgin" oil, preferably organic /"ecological". This is my recommendation too. Similiar recommendation for other food oils which are occasionally used; olive and rapeseed / canola oil.
My cats love coconut oil. I use it for cooking, and every time I open the tub they come running. I usually give little smears to them as occasional treats, as my vet said there's no harm in it, and it may help with hairballs.
Love this discussion! If a cat desires coconut oil, I will allow them to eat it. As the article says, typically they won't eat it; even when they eat it to self-medicate, they usually stop in a day or two. I have had a cat eat it for uri. I.had a cat need it for healing after antibiotics failed to heal the bites.
i never had any issues giving this to my cats. I used it externally. When a pet has a dirty butt and needs assistance cleaning, one add this onto a wet wash cloth then run it along the soiled areas-it will help pull said soils off. My groomer is the one who showed me this trick for my deceased heavy girl Floey. She said it was safe if she licked it-my vet confirmed. We only used it a few times. Wasn't a daily use item. My vet said I can use this in help of fur balls and constipation but I never gave it a try. Maybe others can chime in.