Cats that come from rescue groups and animal shelters are more likely to have relatively minor illnesses that if untreated can become serious.

Before you leave the shelter, ask the shelter or rescue group for a written copy of their medical support policies. Will they provide vet care, medicines, and for how long?

So congratulations, you’ve just brought home your new furry friend and you want to know what to do next. If you already have a resident cat at home I strongly urge you to do a slow and gentle introduction. Not only may this assist you with the introduction between them, but it also makes it much less likely that your resident cat will catch anything from your new friend.

Never give your cat any human medication unless directed to do so by your vet! Many common human medications (like aspirin or Tylenol) are dangerous to cats and can kill them.

Please contact your vet or shelter if any of the following symptoms listed below appear.

If you already have a cat at home and he develops any of the above symptoms even though the new cat appears healthy, then the new cat is likely to be a latent carrier and has infected your resident cat.

Miss Kitty is sneezing! Probably the most common illness in shelter cats is URIs (colds). The first symptom is usually sneezing. Additional symptoms include discharge from the nose or eyes, nasal congestion, loss of appetite, and lethargy. Coughing is a more serious symptom.

You should consult your vet or shelter if you see cold symptoms. Most URI’s are viral, so medical care is generally supportive. Cats are prone to secondary bacterial infections, so it is standard practice to put cats with colds on an antibiotic. Do not attempt home remedies to take care of the problem. The most common viral URI is Feline Herpes aka Feline Viral Rhinotracheitis and it tends to be chronic and recurring (especially when kitty is stressed). Most vets say that adding a pinch of L-Lysine to the diet helps prevent this virus from replicating and reduces flare ups. Seek veterinary help for any URI and always before starting a treatment.

It’s very important that a cat keep eating during the cold. Eating helps her immune system fight the cold, and without sufficient food your cat will lose energy and possibly become dehydrated. When cats get stuffy noses they lose their sense of smell, and cats that can’t smell their food will generally refuse to eat. The first step to keep a cat eating with a URI is to motivate her to eat with foods that may be smellier than you’re used to feeding or by adding dried fish flakes to her current food (available at pet stores). Talk to your vet about using saline drops like “Little Noses” to help unclog the cat’s nose. You can also create a steam bath in your bathroom to help with the congestion. If you cannot coax the cat into eating the next thing to do is start syringe feeding. Your shelter or vet will give you specific instructions on how to do this but a cat that stops eating must take in food within about 48 hours or be at risk for a serious liver disease.

If the cat’s eyes become goopy or teary, or the eyelid is partially closed, you will need to get some eye cream or eye drops for her. This is important to prevent permanent damage to the cornea.

Young kittens are at greater risk from diarrhea because they can easily become dehydrated, and also because some parasites that cause diarrhea can kill a young kitten if untreated. Adult cats need treatment too.

A cat that makes a rapid change from one type of wet food to another will often get diarrhea. His digestive tract simply hasn’t had a chance to adapt to the new ingredients. Ask your shelter or rescue group what food he’s been eating, and either keep him on this, or slowly migrate him to a new food. This is particularly true with canned food. Diarrhea from a change in diet shouldn’t be watery, bloody or mucous filled – just loose.

Roundworms are the most common type of worm in kittens (most are born with them). They can cause mild diarrhea, sometimes with a little blood, and if untreated can become serious. Treatment is a liquid medication that is given orally by your vet. All young kittens should be treated for roundworms. Please do not seek over-the-counter treatment for roundworms.

Coccidia are single-celled organisms that are a common cause of diarrhea in cats and kittens. The smell of coccidia-related related diarrhea is often described as sour-fruity. The diarrhea can be pale colored, bloody or watery. Kittens and cats are often treated on the presumption of coccidia because of the speed with which coccidia can cause serious complications even death in kittens if untreated. A negative float test result does not mean that the cat is not affected.

Giardia is another parasite that causes a foul-smelling diarrhea – it often appears quickly, and tends to have visible mucous in the feces. A negative float test does not mean the cat is free of infection.

A relatively new type of test called a PCR test (Polymerese Chain Reaction) amplifies pathogenic DNA material allowing for an early (even before antibodies are produced) and extremely accurate test result for many types of illnesses including respiratory illnesses and parasite induced diarrhea. The PCR test is both fast (1-3 days) and affordable and is the new gold standard in testing for these types of illnesses.

Ringworm is a fungus, and not a worm! While mildly contagious to humans, ringworm isn’t as bad as many people think, so don’t panic. Ringworm is not dangerous to cats, or to humans except for young children, the elderly, and people with compromised immune systems. It typically appears as a roundish bald spot commonly found around a cat’s face, ears, head, paws, and tail accompanied by scabby, reddish or grayish welts.

Common treatments include twice or more daily applications of over-the-counter anti-fungal creams to the affected spots. Lime dips, and other prescribed oral medications like Terbinafine may be worth reserving for more serious cases.

Ear mites are little organisms that resemble microscopic ticks. Sometimes shelter cats have dirty ears. If the dirt is black and crumbly like coffee grounds it may be ear mites. The ears should be thoroughly cleaned before leaving the shelter. If the black dirt returns over time then the cat probably has ear mites. Treatment for ear mites (typically ear drops) should only be used after the ears are cleaned.

Fleas are hard to see – more commonly you will see flea “dirt” which looks like specks of pepper and is actually flea feces with digested blood. Use a flea comb to remove some of the dirt and put it on a wet paper towel – if in a few minutes a small bloodstain appears then it’s definitely flea dirt.

For kittens eight weeks and older, common “spot on” treatments include Advantage, Revolution, and Frontline. They all provide protection for a month but many parts of the USA are reporting increasing flea resistance to Frontline. Program, a chewable pill, works by interrupting the life cycle of the flea, so it takes longer to be effective but has no toxicity issues. Capstar is an oral pill that can be crushed in food and while it doesn’t provide long-term protection, it will kill the fleas in 3-6 hours, and in consultation with a vet is safe in kittens under 8 weeks of age.

Please don’t use flea collars! They aren’t effective, and because they surround your cat with an insecticide 24/7 they pose a risk of toxicity. They are also a strangulation hazard.

You’ve done a wonderful thing by adopting a cat or kitten from a shelter or rescue group! Despite the best efforts of these organizations, many cats will still have some medical issues around the time of adoption. Most of these problems are easily resolved with the timely intervention of the adopter and with the help of a vet.

If you see symptoms in your adopted kitten or cat, please don’t wait to get help, and don’t wait for the symptoms to go away by themselves. Contact your vet or shelter at the first sign of symptoms. And may your cats live long, healthy and happy lives!

StephenQ works in the medical department of a nationally recognized animal rescue team that responds to natural disasters and cruelty cases across the USA. He has both a beautiful blind-from-birth cat named Jenny and her feline friend Cricket whom he shares with his human companion. He can be reached via his forum profile at thecatsite.com. 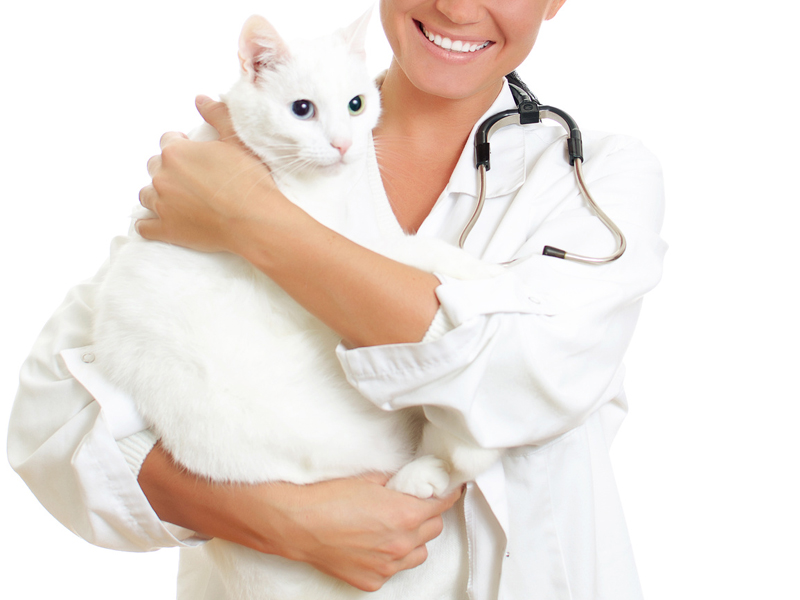 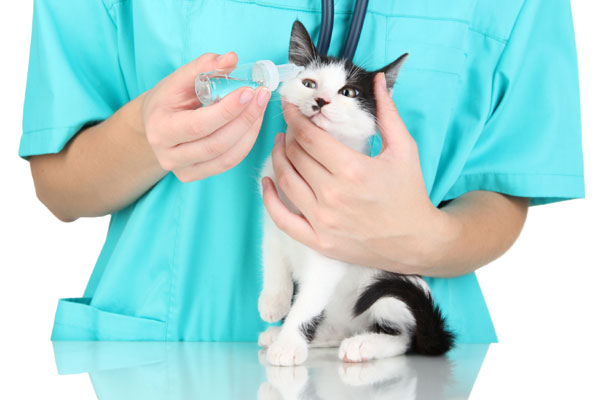 Eye Problems In Cats: What Every Owner Needs To Know 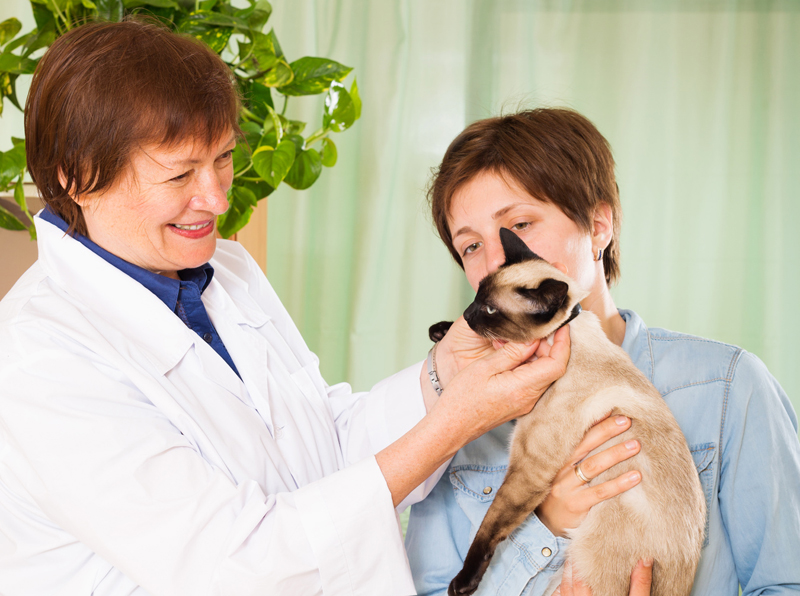 How To Choose The Best Veterinarian For My Cat?