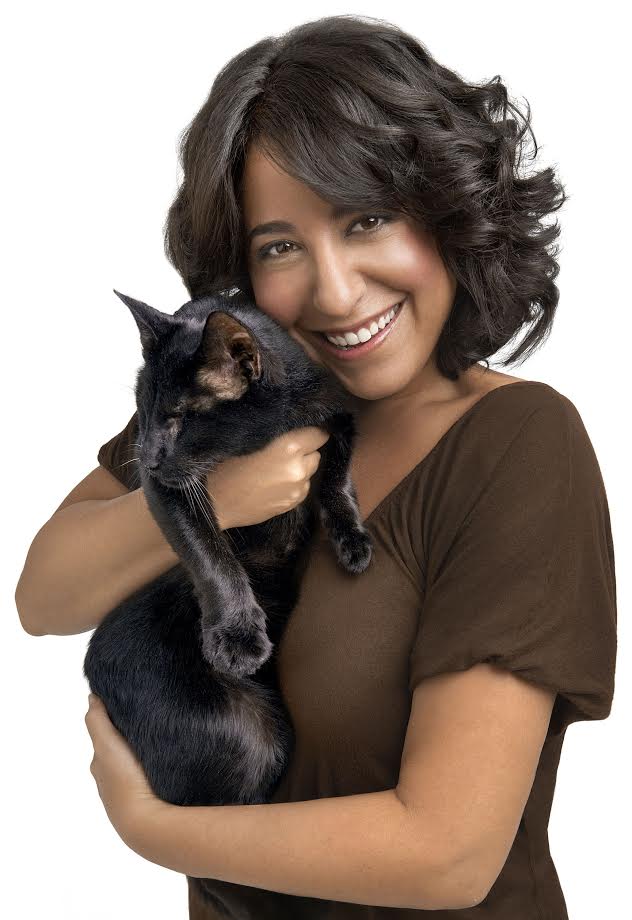 Photo of Gwen and Homer the blind cat

Homer begins his sneak attack by flattening to the floor and in silent mode, approaches within pouncing distance. For Homer, quiet is equal to invisible. As he gathers himself for the final leap, the other cat jumps him! How do they always know?

They can see him coming. Homer doesn’t know this. Homer is blind.

Found in Miami, he was about two weeks old and already had an eye infection so severe the veterinarian was forced to remove both eyes and suture the eyelids closed. It gives Homer a squinty look but keeps out any dirt or debris.

Now Homer lives in New York with his person Gwen Cooper, her husband, and two other cats. Moving to a new home hasn’t been too much of a problem for him says Gwen. “I show him where the litter box is first, then food and water. After that, he explores at his own pace. The other cats hide under the bed for two days but Homer is memorizing the layout.” Homer is wedded to his habits—he knows when he is supposed to be fed, when the sun shines in the window and he’s sure he should not be left alone. “It’s not anxiety but he likes one of us or the cats nearby so I always try to make sure he knows when we’re leaving the room.” Gwen said.

Homer is a good organizer, without lifting a paw. With a blind cat, rooms need to be clutter-free, no magazines to slip on when jumping on the coffee table and no shoes left in the hallway to trip over. Furniture rearranging is kept to a minimum. Homer’s made a few errors in judgment but learns from his mistakes. After a dip or two into the bathtub, he now navigates the edge of the tub without slipping. “He always goes back to figure out what he did wrong,” said Gwen. “The next time, he does better. We call him the Cat Who Always Comes Back.”

“He has no fear. Homer loves to climb and if he’s in a hurry to get down, watch out—he’s going to jump. He is a cat who is capable of enjoying life like any other.” Gwen said. “If you’re thinking of adopting a blind cat, just use common sense.”

Janis Badarau found a stray cat who had a bad cough, one clouded eye and a torn ear. Viewed from above, she was so skinny, she looked like a T shape. The veterinarian thought an injury during a fight caused the cloudiness in her eye. “The vet says Skyler can see a little bit, but that it’s like looking through Vaseline. Essentially the eye doesn’t work, and we often see her cocking her head to one side to see. Occasionally she misses her mark when she’s jumping somewhere, but for the most part she can compensate,” said Janis. “Four years later, her left eye is almost completely clouded.”

Skyler is very playful with people but is skittish around other cats. Sometimes she is defensive and warns them away. The cats know they have the advantage when they sneak up on her left side. Janis watches closely and intervenes when necessary.

Skyler’s vision may not be perfect but Janis said, “We don’t care. Her fur is like velvet and she loves to wash us. And with the good food and TLC she gets from us, she has gained sufficient weight and stopped coughing.” 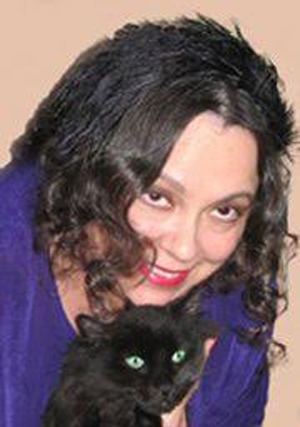 Photo of Carole and Midnight Louie

What about cats who go blind later in life? Carole Nelson Douglas’ Midnight Louie Jr. went blind at age eight. Carole writes the Midnight Louie, feline PI, mystery series. “Louie had picked me when I was touring the Lubbock animal shelter during the first Midnight Louie Adopt-a-Cat book tour,” Carole said. “Junior became our seventh cat, more than we’d ever had, but I couldn’t resist him. We ended up driving 600 miles to get him once I’d finished my book tour.”

When Louie missed when jumping onto the arm of the sofa—twice—Carole took him to the vet who diagnosed retinal deterioration. A specialist said the loss of sight would be gradual, like “stars winking out one by one.”

Louie has remarkable survival skills. He finds his way around through scent, even as he’s aged. “His sense of smell and hearing are so keen it appears that he is responding like a sighted cat,” Carole said. “When we get a new computer system and the boxes are piled three high in the living room after arrival, Louie will be sitting atop them.”

“He became curious about the spayed feral cat we brought in and visited her crate. She wanted to be friends. Although he couldn’t see her flipping over and tail-pulsing overtures, she completely fixated on him. “It’s the eternal triangle, though. Louie had bonded to me first and foremost,” says Carole. “He only tolerates Audrey’s determined side-rubs and efforts to eat and drink with him.”

Louie had two brief spells when he needed a little help as his condition worsened but Carole says, “He soon compensated and got his groove and amiable mood back. And he did and does that while suffering terminal cancer. Because the blindness was gradual, it’s become the least of his problems.”

Cats are wonderfully adaptive. As Homer, Skyler and Midnight Louie, Jr. show, loss of sight is more of an inconvenience than a disability.

Where To Find A Kitten 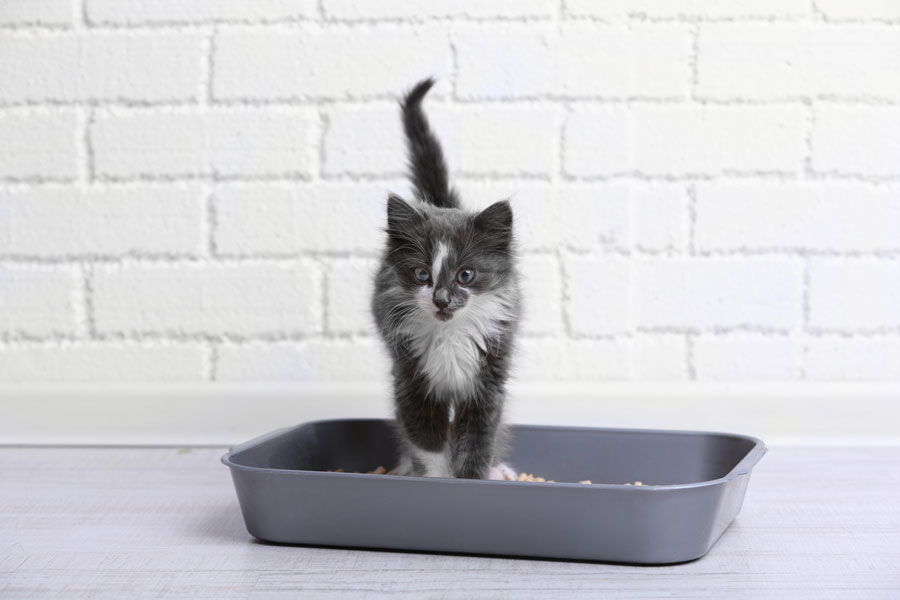 How To Get Cat Urine Smell Out Of Carpet: Effective, Non-toxic Solutions 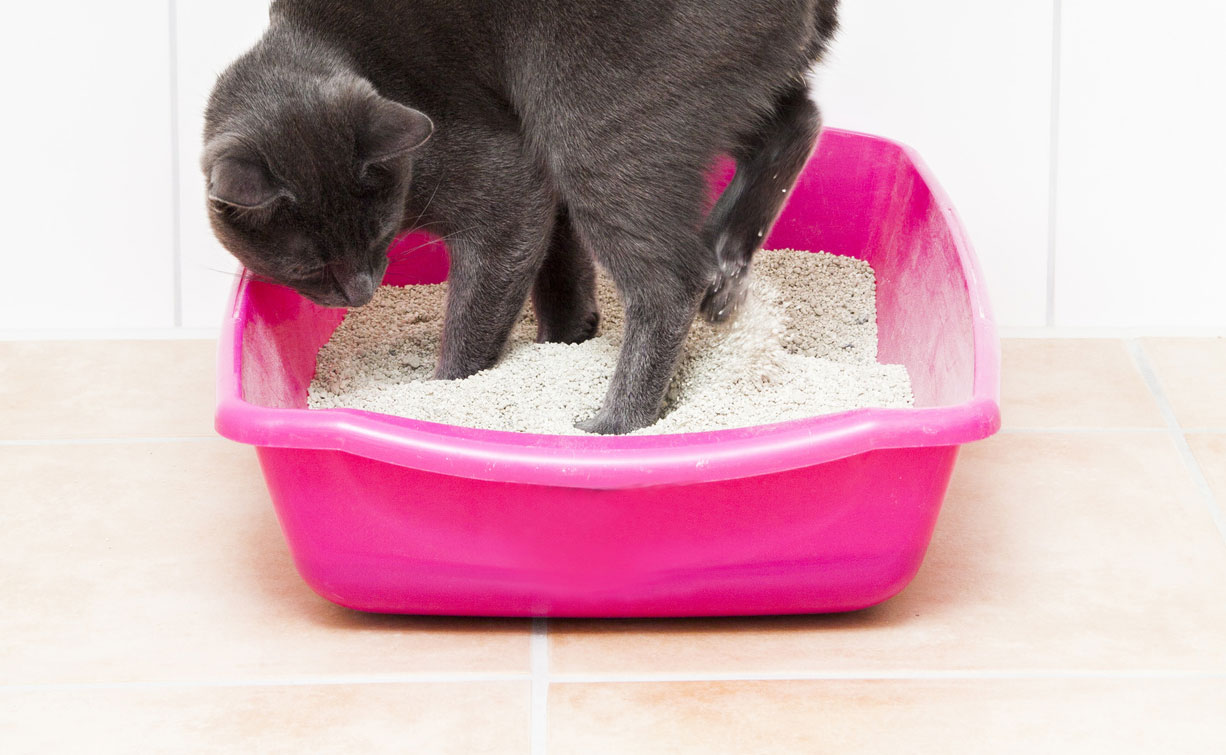 @Loopycann it's a great question to ask on the health or behavior forums. As a rule of thumb, questions should be posted there, as more people will see them and respond.
Has anyone had a cat that went blind in the later years of life and how did they react?
I have a blind from birth cat named Jenny, who is super happy and fearless.  When we take her and her step brother up to the maine coast in the summer, she runs with me on the beach!  She hunts beach crickets, always supervised of course, and at home she runs the house.  She adapts to new environments really well, and having her has taught us so much. She also has her own public facebook page, please visit her at www.facebook.com/jennytheblindcat  I was very sad to hear recently that Gwen's cat Homer passed away this past summer.
I have a one eyed cat. You'd never know he is sight impaired. Blind cats are just like any other cat. You have to make some adjustments but is relatively simple. If you need more proof, go to the Blind Cats Rescue page.
I really want a blind cat... they sound interesting!
Thank you for sharing Billy's story with us!
I have a blind cat, Billy. I have so many things I can say about blind kitties, they are awesome. Billy adapts so well to things, he has been through a big move when we bought a house and was the first cat adjusted to the new house. He had an outdoor adventure Memorial Day weekend 2011, and after 3 hours outside was found and brought back in. Billy sleeps most nights in between my husband and I, under the covers. He loves being held and cuddled and is a very happy cat. Billy learns by feeling...he won't climb/jump up something if he can't feel the top....and won't climb down/jump down unless he can feel the bottom, or has done it before enough to remember how to get up/down. He climbs a stool to get on the counters and knows how to jump down...but when he climbs onto the fridge he can't get down so he coos. When he coos, it is his way of asking for help...we wake up in the middle of the night sometimes to hear him in the window trying to get out but the curtains confuse him, or he can't find the litter box or he has climbed the home gym in the bedroom and can't remember how to get down. He is so very smart though. He gets spooked easily but has a cat tree that we can never move because when he is scared he runs right to it and hides. He loves being outside but usually only to roll around on the concrete or grass. We stay close to him though, and he gets scared easy after his outdoor adventure. If he doesn't hear us talking or moving while outside w/ him he will coo until we talk to him, just to make sure we are near. Blind cats are so adaptable and smart. No one can tell Billy is blind (eyes are still intact) unless they see him run into something or I tell them, which i do tell anyone who comes in contact w/ him. I do daycare in my home and the children love the cats, I just make sure to remind them that Billy is special so we are careful w/ him. I have to remind all my daycare parents that Billy is blind because a few months ago one of them stepped on him...he was crowding the door because he wanted to go outside and she didn't look before stepping and stepped right on him...so now I remind them to watch out for him because he loves doors! He also loves to wait for my husband at the door. he knows what time of day my husband gets off work and will wait by the door...and if hubby comes in without greeting Blly, Billy will follow him until he gets petted/picked up. In the AM when he leaves for work billy will stand by the door for a few minutes cooing...his way of wanting to know why he is being left again, and why he didn't get outside time!