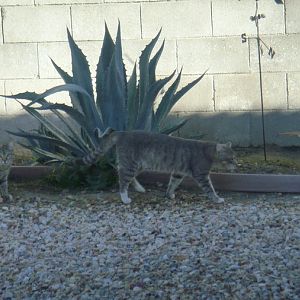 Should I Still Be Hoping My Missing Cat Will Come Home?

May, 2017
Yes! not only is he home safe and sound, I have been able to bring him inside. I was trying to trap another cat and 4-Socks got into the trap first.
Instead of releasing him, I took him into the cat enclosure with the other cats. I had just placed his sister into the enclosure - long story. Since the cats were already friends there was no transition period between the cats, and 4-Socks has become accustomed to being inside quickly.

Can view media items
Everyone