Will my cat ever stop hissing at the new kitten?

We lost Monty last November, who was only 5, due to an undiagnosed heart condition. He had a blood clot and it was very sudden and traumatic. We felt there was an empty space in our home and room for another rescue, so we adopted Rupert two weeks ago.

The girls have integrated with each other (they aren't sisters) and Monty in the past so I thought they would come round fairly quickly, but it is taking longer than I thought.

Rupert has his own space where he stayed totally by himself for a few days, we did scent swapping, feeding etc and now he is out & about in the main house the majority of the time, except overnight.

We're two weeks in now and Peanut is still hissing and growling at Rupert a lot. I'm starting to wonder if it will ever stop. Pippa will still occasionally hiss too but she is in general a lot more tolerant of him.

The issue, I think, is that Rupert is just way way too boisterous for them. He is just crazy bouncy and wants to play all the time. He isn't fearful of them at all and clearly desperately wants to be friends, but he is also paying little attention to their 'f off' signals when they want a break.

If I supervise and play with a toy with them both or feed them treats then things are fairly harmonious - they will be near each other and eat/play with no hissing. As soon as I leave them to their own devices the hissing/growling starts again and it is relentless.

Sometimes Rupert deserves it, if he barrels up to her (playing) but a lot of the time she hisses/growls at him just because he....exists? lol

Some positive signs (I think):

- they will eat treats together
- they will play with the same toy together
- they will go to sleep in the same room (but not in the same place)
- Peanut always seems interested in where he is and will follow him around to keep tabs on him. If I put him in his room she sometimes sits outside his door.
- they have nose bumped a lot. Sometimes this is followed by a hiss/growl but sometimes not.
- as of yesterday Peanut has started chasing him. I can't actually tell if this is definitely playful, as she does still growl a bit while doing it, but it doesn't result in fighting so I think it's playful?!

I have Feliway friends plugged in in different places in the house, and I am trying to give Pip and Peanut lots of fuss and reassurance, but is there anything else I can do? 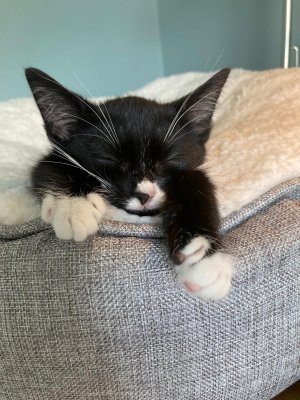 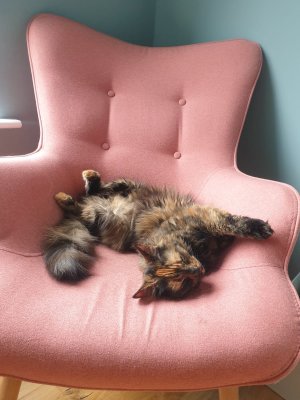 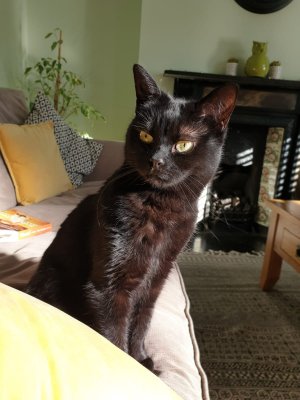 Woops I submitted my post too early without the girls. Peanut is the naughty tortie (obviously...) and Pip is my black kitty x
A

Adults don't hurt kittens. Sometimes they will pin them and give them a bit of a whumping to try to teach them some manners, which isn't a bad thing. In fact, older cats that are willing to whump the kitten a little bit tend to do a lot better than those that just growl and try to go into another room or something.

Hissing and growling are almost certainly nothing more than Peanut teaching this little upstart newcomer his place in the general scheme of things. Rupert may, at 10 weeks, be beginning to smell a tiny bit "hormonish" as well, and queens can be a bit territorial, more so than males. If that is part of it, that part will clear up in the weeks following his neutering. But most is probably just teaching him his manners. It is absolutely normal. I have, as A ArtNJ said, never seen an adult cat seriously harm a kitten, unless there was a serious underlying issue. The only instance I have personally known of proved to be the result of an undetected brain tumor, a 1:1M chance. And there were many other signs that the cat in question had something serious going on.