Yesterday we started getting the remnants of hurricane Ida, we have gotten over 3 inches of rain in 12 hours. It has finally cooled down some. Temperatures are going to be in the 50’s and 60’s at night.

We've had the windows open for the past few days and it feels wonderful.

Greetings everyone. The aftermath of Storm Ida dropped better than 7 inches of rain in under 12 hours. Basement flooded to the point where water was flowing over the sill of the sliding door. Power went out and with it, Internet connectivity.

Water running along the edges of the driveway undermined the edges, then ran crosswise under the driveway. Which has now buckled into "valleys" deep enough that the asphalt is cracked through on the "hills." The only one of the six paving companies we called, the only one who phoned back, said the earliest they could get here would be November, maybe later. And once winter gets here the driveway will not be plowable as it is.

There is such washing out along the driveway and along the seasonal brook that I am sure the small bulbs that had been growing there are now somewhere else. To give you an idea how bad it is - the culvert under the road that is maintained by the county is now filled to street level with debris.

While I'm relieved that power is finally restored and the basement is (mostly) dry I am sad about what will be with my garden.

report from New Jersey, the rather battered Garden State

I’m glad to hear that you’re safe, C catapault . How scary it all must have been.

Currently 71* with a high of 82*. Windows are open and there is a slight breeze.

I've had the a/c off all week and it was so nice to keep the windows open. But it's heating up to 90 F tomorrow.

then back to 90s maybe 100s again colorado river is gonna be bone dry soon any one wanna start a trucking company to transport water across the country by the tanker and sell by the gallon here in the west?i figure 40 bux or so should cover expenses etc. and still leave us to sell for a few bux on the gallonthe east has plenty of water to

66 degrees and cloudy outside

its now 61 degrees and sunny

59 degrees and clear outside

Central USA. They are wrong about the wind speed. Nothing moving. Hot and humid, like trying to breathe thru a wet handkerchief, not a breath of a breeze. Rain moving in tonight to cool things down. 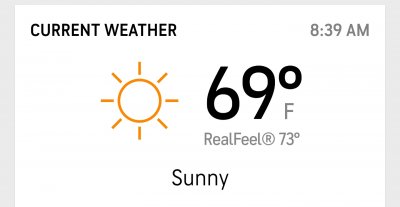 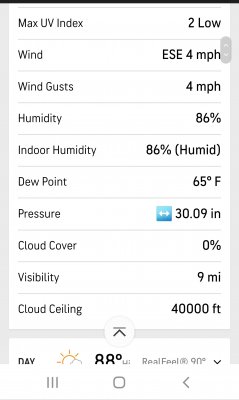 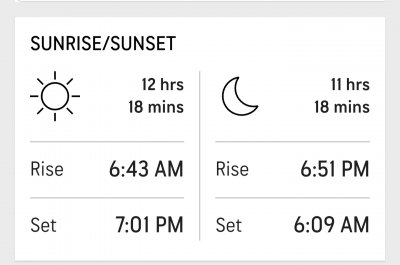 right now its 67 degrees and a clear sky