both of those lemon cakes sound wonderful!!

tonight i'll heat up a(nother) stuffed pepper half, a slice of bread with the last of a jar of pineapple preserves, and a slice of banana bread for dessert.

Lots of leftover Asian dumpling filling, leftover pork chops and leftover orange sauce...so I made for tonight's dinner...and 5 extra lunches for the freezer:

Next weekend, I think that Birdseye Steamables veggies may be what's for dinner. After from-scratch pizza last weekend and from-scratch Asian this weekend, I believe I'm overdue for an open a bag and heat weekend. 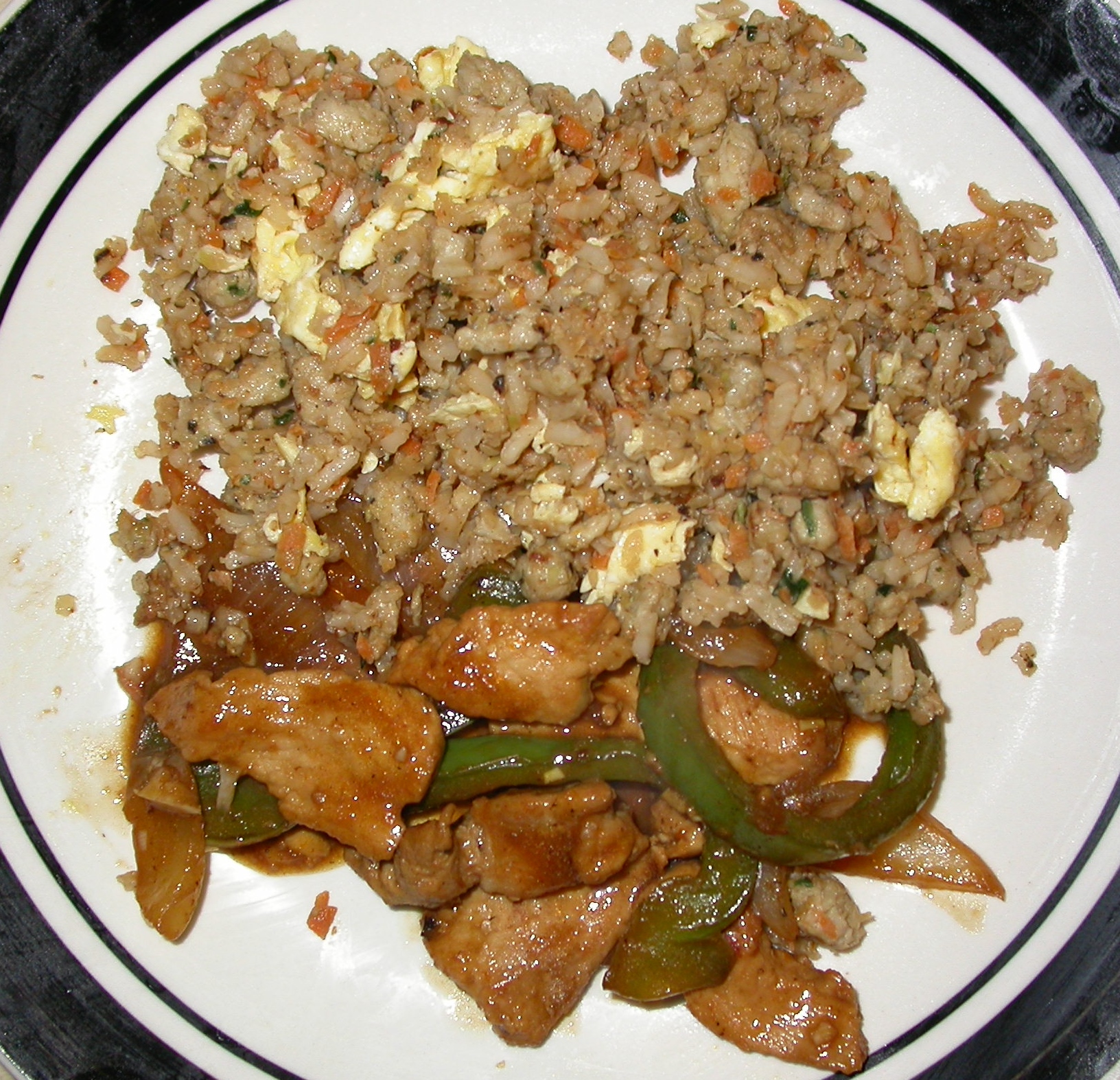 neely said:
Not dumb at all and, yes, it is made with eggs and vegetables. (There is egg foo young made with meat also.)
Cookistry: Fresh Vegetable Egg Foo Yung

I don't know about all Korean restaurants but the one I have been going to for years is all vegetarian and vegan. The owner(s) and chef(s) are two brothers, the atmosphere is very relaxing, i.e. cell phones are not allowed, and they play soothing music indicative of their Buddhist background. The food is unique, fresh and generous portions. I generally go for lunch but order another item to bring home for dinner.
Click to expand...

The egg foo young looks good but I can't do eggs. That was my mothers favorite Chinese food.

We don't have any vegan restaurants around here. I would have to go into DC and that's something I'm not willing to do. It is just too far away. I will try a Korean place around here though.

We had homemade tater tot casserole.

will be a stuffed pepper half (microwaved to heat it up) and a little parmesan cheese sprinkled over it, a slice of bread with jam, and 3 oatmeal peanut butter cookies.

Thanks for the early birthday wishes!

Tonight is Meatloaf with Cheddar-Smashed Potatoes in the pressure cooker. The recipe is from Pressure Perfect by Lorna Sass. I have a bit of cabbage in the fridge and will make some coleslaw from that.

neely said:
Long day today visiting my sister-in-law in the hospital so DH and I agreed to treat ourselves to Asian carry out tonight. I'm undecided between veggie egg foo young, tofu w/mixed steamed veggies or zucchini w/black beans and rice.
Click to expand...

When my sons were little, their favorite food was egg foo young, and at least twice a week they would tell me, "Mama, PLEASE make egg foo "yum"!


Winchester said:
Thanks for the early birthday wishes!
Click to expand...

Adding mine to that!

Tonight is going to be scrambled eggs and biscuits...again. And maybe tomorrow night, as well. Dunno.

Oh, wow, that meatloaf was excellent last night! If you have a pressure cooker, try doing meatloaf in it. So good. Rick loved it, too. He took a huge meatloaf and cheese sandwich in his lunch today; the thing was gigantic. Yum! He won't want to work this afternoon after eating that. I'll be making it that way again.

We have some Lean Cuisine meals in the freezer and I may do a couple of those tonight, with the rest of the coleslaw.

I may have to get a pressure cooker and that book! I've been considering it for a while now, mostly to make the odd preserve and such.

Tonight...I forgot I still have a couple of servings of that really good pork roast I did at Halloween in the freezer (the roast in the freezer, not Halloween). Pork sandwich tonight!

Was going to have the leftover steak and asparagus risotto for supper, but I am still waiting to hear if my car will be ready.

Thinking it is going to be a meal of cheese, crackers and green grapes.

A frozen pad thai dinner with leftover salad greens. Just something quick and easy because I have to go out soon to a meeting.

Mamanyt1953 said:
I may have to get a pressure cooker and that book! I've been considering it for a while now, mostly to make the odd preserve and such.
Click to expand...

I really like our pressure cooker (we don't have an instant pot because we have the PC). When we did our kitchen over, I think we lived from the pressure cooker and the crock pots. If you need some cookbook ideas for a PC, definitely try Pressure Perfect....it's a good one (BUT she bases a lot of her recipes on a stove-type pressure cooker and I have an electric one. It's OK and I can deal with it, but thought I'd mention it).

Another good one is Comfortable Under Pressure by Meredith Lawrence (she's on QVC a lot as the Blue Jean Chef). It's a great book, esp for beginners. Easy recipes, good recipes. She now has another book Delicious Under Pressure; I don't have it, so I don't know what it's like. I have another one that I use quite a bit, but for the life of me I can't remember the name of it. I'll have to look tonight. I also like Great Food Fast and Slow Food Fast by Bob Warden.

(When I first got our PC, I was wary and when I used it, I didn't leave the kitchen. Kept expecting a KABOOM! or something. But it's really easy to use.) I use our PC often; it's a good appliance. I like that I can saute the meat and vegetables in the same pan and then cook. And I love that we can have a good meal in about 45 minutes.

We didn't have the Lean Cuisine meals last night. Rick wanted spaghetti, so I made that for us. Tonight will either be tuna and noodles or maybe mac and cheese. We're on a pasta kick right now; we just had mac and cheese at my sister's the other night, but Dear Richard just loves mac and cheese.

I suppose that's a good thing

I did make mac and cheese last night. I was going to make a 9 x 9-inch pan, but Rick came out to the kitchen, saw the pan I was going to use and said, "Is that all you're making? I can't take much to work!" So I made the 13 x 9-inch pan and he was a happy camper. He took a big hunk to work today.

Rick is not bowling tonight; they have too many bowlers on their team, so each member gets a week off. I took a small piece of beef from the freezer last night for a beef stir-fry tonight.

That sounds better than not sucking...sounds pretty yummy!

I have some chicken thighs thawed and a little of the head of cabbage left and carrots. No inspiration yet, but those will get turned into some type of dinner. Maybe soup with some noodles.

I have no clue what I'm doing tonight. None at all. However, I was plundering through the freezer last night and found three steaks that I had utterly forgotten, so I'm picking up a small bag of french fries when I shop Sunday. I haven't had a french fry in two years! I'm treating myself to steak and fries...THREE TIMES! Also, buttermilk to make cornbread dressing with. I want to do baked porkchops with dressing SO BADLY!

I made a curry chicken witih mango and lentil dish yesterday. It came out awfully soupy (just one cup of chicken broth) and there wasn't much curry flavor

I have leftovers for the next few days.

Pizza and chicken from pizza ranch. I’m so hungry. We made a salad to go with it.

Just made chicken soup with homemade egg noodles. Another one of my "not pretty, but it tastes great" things. 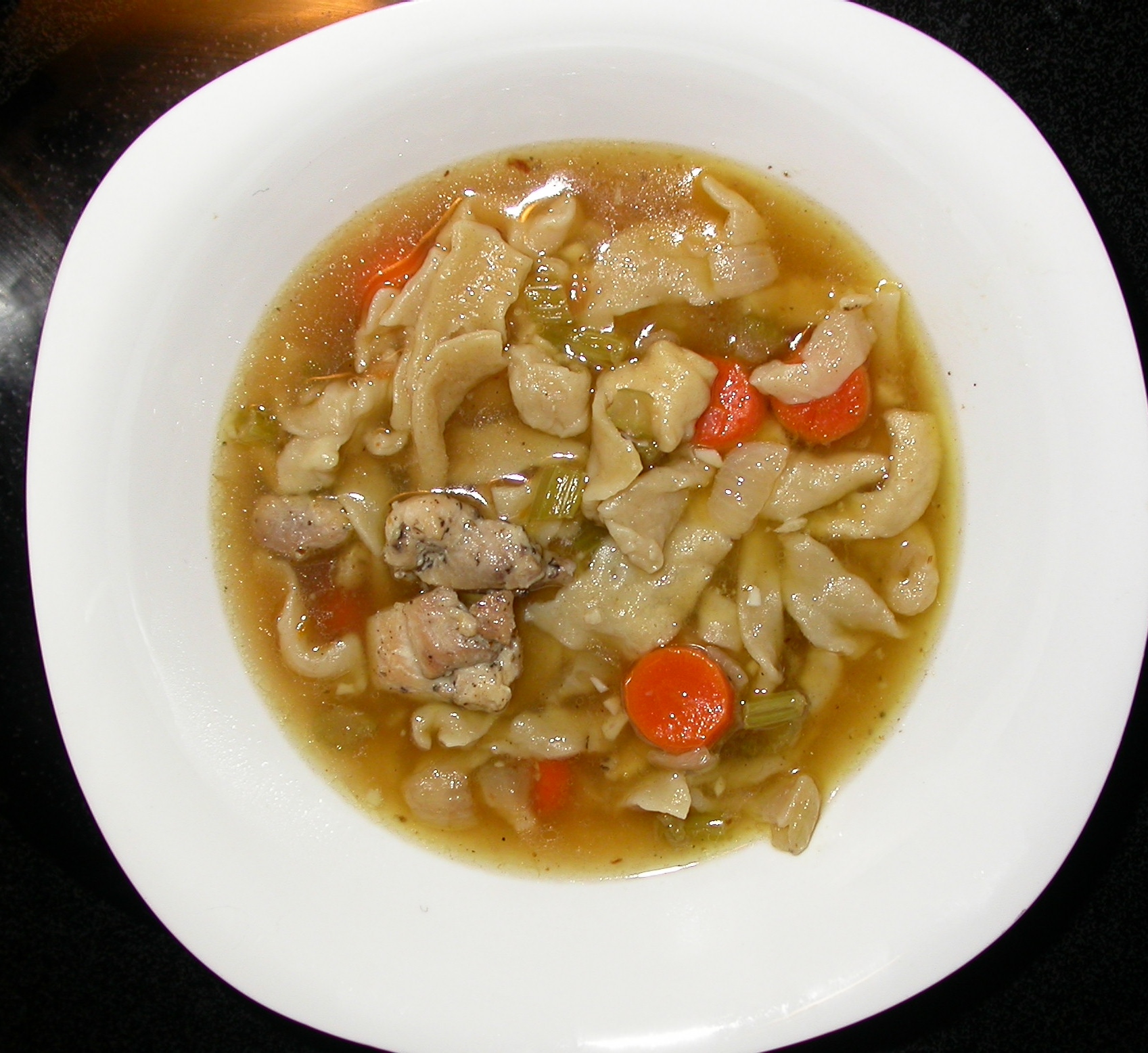