What Are Your Cats Doing Right Now?

Not "now" but here is a video of rivel eating

Mocha was sprawled across Iris, licking her head. I had to move her off because Iris was starting to wheeze!
Iris: “Get her off, Mom. She’s smushing me!” The weather has turned much warmer so I started doing laundry to put away the winter blankets and throws, that is until Carleton decided to take a snooze on one of the afghans and wouldn't give it up. 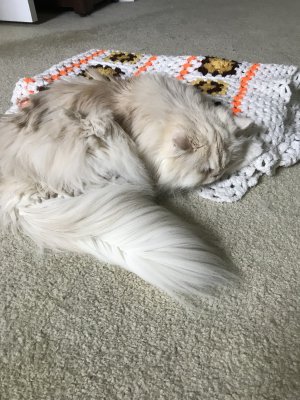 Why is she doing this? Routine seems more & more important to Zorro in his golden years. After successfully herding me to bed, he is now at his appointed place, mashed against my right foot.

Current view... (sorry about distorted camera view. I was sitting and trying to get both in the picture) Charlie is napping, and Selene is just sitting in front of the AC, staring at it.

Family was in a panic because we couldn't find Gracie. Then we looked up. It's finally warm enough to throw open all the windows and Maple is going from window to window checking out all the views.

We’re practicing for the newest Olympic sport here: synchronized sleeping. Mocha needs to tuck her head down and to her left a bit more, but otherwise, not bad. Note that the right hind legs and the tails are almost perfectly positioned. 7.5? I’m always kinda jealous of a cat’s ability to nap so deeply & so happily. What is the secret?

Margot Lane said:
I’m always kinda jealous of a cat’s ability to nap so deeply & so happily. What is the secret?
Click to expand...

I wish I knew! For Mocha and Iris, it’s being together. We had a close call situation!

I came home from work and my husband said, it's all worked out but I might as well let you know...
He had taken the dog for a walk. When he returned he noticed the door hadn't shut completely. He immediately went to check for our cat but couldn't find her anywhere in the house. (I should add she is strictly an indoor cat. I sometimes take her for little "jaunts" on her harness and she usually just wants to go back inside after a few minutes.)
So he immediately goes outside shaking treats but all this accomplishes is attracting attention of neighbour's cat which would just scare her away anyways. Then he thinks he sees....far far down the bottom of the hill a black blob moving quickly so runs, but he says that black blob is moving so fast! It disappears! A car brakes as the black blob runs across the road. He runs into several people, one woman with a dog, asking "have you seen a cat?" Some people thought they saw something but that it was a fox? (There are some black foxes). He gives his number to various people. But he says he's that black blob moving and it's skittering fast "with that Pepé Le Pew upright tail" and not the loping movement of a fox and there are no skunks in the area we live. He heads back home up the hill and...there she was, waiting right at the door to be let back in.

She's a larger sized lady so I'm shocked/impressed that she was able to move so fast!

She seemed very - self-satisfied with herself after this great adventure.

I haven't posted in this thread for awhile because...nothing ever changes!

Ozzy has made a career out of napping on my lap. 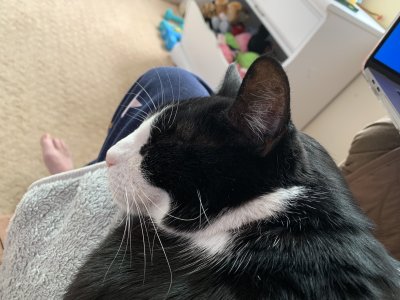