We have brought a community cat inside--Advice Please!

moxiewild said:
If your daughter is really into cat or animal behavior like she seems, then she might even really enjoy doing clicker training with him!
Click to expand...

what a fun idea!
J

Thank you so much, moxiewild and furballsmom! I will look into clicker training, because I think that my daughter would love to try training him!

There is definitely no rush at all on introducing the cats. Tucker has a vet appointment on 7/20 to get the rest of his shots and get checked over, but even after that, I think he and my daughter are perfectly happy keeping him where he is for now. I will keep working with my resident cats. They had no potty accidents today, so that is progress, but there was some Level 10 hissing from Toffee when I exited the room after cleaning out Tucker's litter. She was just sitting outside the door, and when I came out, the hissing started. She didn't hide, and then she hung around the closed door for several minutes, smelling everything. She is definitely the least comfortable cat right now, so I will take my cues from her.

I'm so glad they have you!! I can see where your daughter gets her sensitivity

Tucker's vet appointment went well! The vet estimates him at about 1-1.5 years old, and he is negative for all the cat viruses and in good general health.

Toffee is still not a fan. She spotted him in the carrier when we were transporting him to the car. There was a lot of hissing and then she went into hiding.

Mittens has attempted to enter Tucker's room a few times, so I think she is interested in meeting him. We'll keep waiting on Toffee, though. No rush.

Tucker is back in my daughter's room, resting and recovering from his excursion. He's such a sweet boy!

This is wonderful news!!
J

We have been taking small steps to introduce Tucker to the resident cats. After several days of the the resident cats not reacting to the sock or hissing at the door where Tucker is isolated, we tried feeding the cats on opposite sides of the door. That was a huge flop, not because of aggression but because my resident cats refused to eat there. They are such creatures of habit that they would look at me, then look at the food, then walk to where we usually feed them and wait for me to bring the bowls back to their correct place. Ugghh.

So we abandoned feeding on opposite sides of the door and moved to site swapping last week, where we put Toffee and Mittens in the room where Tucker has been isolated and allowed Tucker free reign of the house for an hour or two. That went very well. Tucker explored the house, found the other litter boxes and used them, and generally made himself at home. My resident cats freaked a little the first day, but after that they have taken things in stride. They spend most of the time they are in Tucker's room smelling things.

Which brings me to Sunday (2 days ago). I left to pick up groceries, and while I was gone, Tucker either escaped his room or someone let him out (nobody will admit to this). By the time I got back, Tucker was lounging on one end of my bed and Mittens was lounging on the other end. Toffee was hiding under the bed. At first, I was super excited, because I thought maybe this means they are getting along! But no. When Tucker tried to edge closer to Mittens, she hissed at him. Then she swatted at him. He swatted back, then Mittens darted under the bed too.

So I put Tucker back in isolation. And since this incident, I feel like he has gotten much more nippy/play-aggressive. He claws at our feet when we walk through the room now, and he scratched at my daughter's head last night, so she slept in her brother's room.

Hi! What was completely normal was all the behavior that you saw between them on the bed. They aren't going to be perfect buddies even after they all start taking naps together, (there will likely be squabbles now and then, like between kids/people) -- which by the way will be a little bit in the future. Your expectations are making you want things to be just so right now, but these are cats, and their time isn't your time.

To have them on the bed together was an enormous step forward in their relationship, and swats and hissing are their way of communicating hey buddy, don't get pushy.

Frankly, I'd let him out. Things are progressing a lot better than you perceive

I let him out again about an hour ago. There has been hissing and even a little chasing. But now we also have this. Nobody is actually sleeping here, but they aren't actively fighting so I'm guessing this is good? 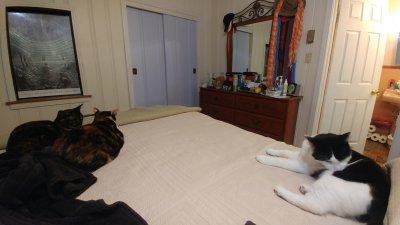 This is very good