So in 2 weeks I will buy him another bag. He currently is on Royal Canin Urinary care and left to my own devices I would buy Science Diet Urinary care. Is there something in the Royal Canin that makes it better than Science Diet? I know his current dry food has something in it that will make him thirsty but left to free feed he porked out on dry food and got back to slightly constipated. So he is back to mainly wet with extra water added and only getting a nibble of dry food. I’m trying to get him down to 1 tablespoon a day. (Yes he rejects all kibble that gets wet..... even with broth

) Since I order off Chewy and have to get a note from the vet to Chewy to buy urinary care food from them. 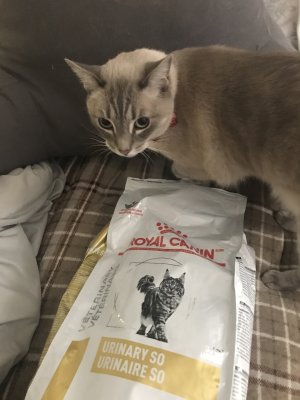 The various urinary care foods do work differently. "Better" is relative and depends on what your vet's diagnosis is. RC and Purina have additives in them to encourage extra drinking. Hills and the other brand don't do that but do something else. You can not mix the foods.

For my 10 year old girl cat, Purina and RC are better b/c her problem is she just won't drink and these foods force them to drink a lot more than they otherwise would. She's been on the food for 10 years with no urinary problems since being on the food.

danteshuman said:
current dry food has something in it that will make him thirsty
Click to expand...

More than likely, it's increased sodium/salt.

Personally, I am not seeing any real major difference between the two in that article above, it is essentially saying the same thing using different words - with the exception of the suggested PH levels varying a bit, which could also be up for 'debate'. Both foods are supposedly helping to maintain a good urine PH balance while reducing various minerals in the foods that can lead to crystals. The one striking comment about the RC S/O was that is helps keep a low USG level - what do they mean by 'low' anyway? A lower USG is indicative of dilute urine, which is not necessarily a good thing; so, it does kind of make one wonder what they consider to be good for a low USG. Anyway...

I was never told that I could not mix urinary care foods, so Feeby was on both Hill's and RC for close to 10 years. However, after some time I added the canned versions as well, and she ultimately ended up preferring the canned over the dry, and then finally wanted none of it. She no longer eats any urinary care foods and is on a solely canned food diet - probably nearly 5 years now.

If struvite crystals are the issue, feeding urinary care food might be preferable at first to help dissolve the crystals. Oxalate crystals generally cannot be dissolved and if allowed to build may require surgical removal, but their formation can be disrupted. However, the biggest factor is moisture, as that is what helps flush out sediment from the bladder, disabling the minerals from being retained in the bladder enough to form into crystals that can irritate the bladder lining or pose blockage in the urethras, the latter being a more likely issue in male cats due the anatomical differences.

There are many folks on this site that have reverted to non-urinary care foods - specifically canned - after rechecks indicate crystals are not forming as they previously were. Any cat with crystals or abnormal urine PH balance should routinely have urinalyses regardless of what food they are eating. And all cats should have a urinalysis at least once a year as part of a standard annual exam.

I know moisture is key. It is why he no longer free feeds dry food and only gets 2 tablespoons at night.... about an hour after his late night meal. I feed him 4 wet food meals a day with a bit of extra water in it. My picky eater gets to keep his fancy feast.

louisstools said:
For my 10 year old girl cat, Purina and RC are better b/c her problem is she just won't drink and these foods force them to drink a lot more than they otherwise would. She's been on the food for 10 years with no urinary problems since being on the food.
Click to expand...

My 12-year-old male Cappy just had annual blood work and urinalysis and struvite crystals were found. I started him on Royal Canin Urinary SO a few days ago. He is a dry food junkie. Here's my concern: All my cats eat Dr. Elsey's clean protein chicken or turkey dry food. It started when my diabetic cat, now diet regulated, needed low carb 2 years ago and then the rest wanted to eat that, too. I have read that cats with urinary issues need no grain, high protein food. Dr Elsey's is 95% protein from meat sources, NO grains and low carb. Seems ideal to me. The Royal Canin ingredients are inferior and certainly contain grains and way less protein. I just don't understand how this prescription formula going to alleviate his struvite crystals. By the way, he drinks plenty of water. Thx.
A

It's absolutely impossible to try and compare the damned foods because the companys fail to convey the proper data.

My guess, as salt is an extra ingredient in Dr. Elsey's on top of the other sodium content that your cat will need a dry food lower in salts and sodiums. My mum has always been worried about sodium content for her cat's for this reason and has fed her cats "trash" diets with the lowest sodium with no urinary issues. I fed Nobel an expensive diet and he got urinary issues (calcium stones though).

I don't understand how the formulas break down the crystals.

The prescription diets are higher in ash, phosphorus and magnesium so I don't see how they would be a good switch for your cat.

Spruce Pets has their list of recommendations, which I hope would have something more suited to your wants for your pets, as I can only make a recommendation I don't think you'd like. The 7 Best Cat Foods for Urinary Tract Health in 2023

I think the difference is taste. Both contain similar ingredients including DL-methionine which is good for urinary acidification (which prevents crystals). I believe Royal Canin has more salt to make kitty thirsty. My boy prefers R/C, but everyone is different.

It is not so simple as "just needing moisture". It is often urethra size. If that is the case, even a cat on wet food could block. Mine was on a combination of wet and dry when he blocked.

Get some water fountains for around the house, too.

Alldara said:
Spruce Pets has their list of recommendations, which I hope would have something more suited to your wants for your pets, as I can only make a recommendation I don't think you'd like. The 7 Best Cat Foods for Urinary Tract Health in 2023
Click to expand...

I agree with your thoughts. I didn't realize there was extra salt in Dr. Elseys'. (That food got my cat Sister over diabetes. She is insulin free.) All the cats eat it; Cappy is the only one with an issue. So far.
I found this on the Royal Canin website regarding the SO formula: "Struvite dissolution. Helps dissolve all types of struvite stones. Low RSS. Helps lower the concentration of ions contributing to crystal formation." It also says something vague like it enhances the environment so that crystals don't form, something like that. Reminds me of beauty creams when they say, gives the appearance of improved skin. Seems like you have less wrinkles. You get the idea. He's only getting the Royal Canin because the vet prescribed it. I will look at your list.
You must log in or register to reply here.
Share:
Facebook Twitter Reddit Pinterest Tumblr WhatsApp Email Link