Tufts behind his ears?

Well at 22 weeks old, the boy who has always been a little more pointy and scrappy compared to his beautiful sister - (she truly looks like a Nebelung) is starting to get tufts BEHIND his ears not at the tips/points. I have only been able to find cats with tufts at their ear tips and IN their ears. None behind the ears. Keep in mind, these tufts just started growing 2 weeks ago. What do you think? Will they get long or stay firecracker looking? I think they are cute they way they are now. He reminds me of rafiki from the lion king. Here he and his sister are as very young kittens before they went up for adoption. Jet, the boy is on the left Here's his lovely sister now. This pic doesn't do her justice. She's got a real royal presence when she's sitting- the lion chest thing

She didn't develop tufts but about a month ago, a weird cowlick presented itself on the top of her neck. (I couldn't get a pic of it) It's like a swirl cowlick, but no tufts behind her ears. It's truly just a cowlick though - not as strange as the tufts So what do y'all think? Is it some sort of recessive trait ??

I see this often in my own breed, which are medium long haired as well. For them, it's the start of the winter coat, which is longer than the summer coat. It's possible this is the same for your cats, as they aren't short haired Time will tell tho.
B

Good to know! Thanks.

I have no idea what your cats will end up looking like once they have matured but they are certainly very cute kittens!

That bottom picture of Jet makes him look like he has koala-bear ears they're so tufty.

I think Biancavd could be right with it maybe being signs of a long winter coat starting, or at least a ruff around his head and neck.

In general their fur does not look quite long enough to be Nebelung, which also have long hair fluffy tails, but they both have lots of growing to do yet.   Nebelung are still very rare around the world but I have been lucky enough to meet one or two 'in the fur' when at cat shows.   Jet has a lovely face and the fine (big) whisker pads of a Russian Blue though so I presume he inherited those from his mom.

BTW, it would be lovely to see more of this pair over in the blue cat thread which is linked in my signature under this post.

Yes! Like a koala bear. I couldn't think if what animal had this except for rafiki on the lion king. Lol

Here's my beautiful Jax that was killed my a stray pitbull

The pitbull got under our fence. We had Jax for 12 years. He was the sweetest coolers chilled out cat ever. I miss him dearly. We got him at the pound and tbe 3 vets we've seen over the years thought he was a Nebelung mix of some sort. He had a sweet little meow and didn't mind water and never used a litter box - he went to the door like a dog when he needed to potty. He was awesome! He had the most mysterious beautiful green eyes and his hair was tipped silver on the ends so that when he was outside it was almost like seeing a beautiful ghost.
B

These pics don't do him justice, but it's all I have on my phone. Here he is sleeping on his favorite pink velvet chair. I had to give it away after he died because it made me so sad Wow, if your young kittens grow in to anything like Jax you are a very lucky person.   Jax looks very handsome, and seriouly furry.

While he has quite large paws and a more cobby body type not typical of RBs or Nebelung, the green eyes and silver tipping to the fur are a Russian Blue charactaristics, and I can see that lovely sheen on your photograph of Jax on his chair.  No wonder you miss him so much, he sounds gorgeous and very well behaved.   What a terrible way to loose him - I hope that your current kittens have a safe, long and happy life with you.
J My wife and I just adopted two kittens. One of them has tufts behind the ears. Both are DMH female sisters.
Here is a photo of the girl kitten with behind the ear tufts.
J A front view of the kitten. Roarié is her name.

I have googled many a time TUFTS BEHIND EARS as I adopted two gorgeous kittens a year n half ago and as one was growing he started to get quite noticeable silvery tufts BEHIND his ears along with a fluffy Maine. I found this absolutely amazing and unique when I realised there was hardly any pics of cats with them behind their ears. Yes on the tips and inside ears but not many behind. I came across the Nebelung online and thought hangon, Zeke (aka: Tufty) for obvious reasons really appeared to look like a Nebelung. When I adopted him from Rescue Angels he had whisky grey fur with white/silvery random hairs throughout which stood out. He did not have ear tufts as a tiny kitten but they did start to become pronounced by the age of about 5 months. Thy were so tufty and like silvery down a few months after that then summer came and they appeared to become less obvious. I was thinking NOOOOOOOO, please don’t fall out. I’d not even let anyone play with his tufts incase they hairs kinda got pulled out, ha ha...it became a bit of a silly joke/reaction when people would tease me by going to fiddle n caress the tufts. I’d reply don’t tug on them just gently touch...lmaoHeading into this winter around April the tufts starting growing back like crazy and are fullon gorgeous velvet looking lush ear accessories atm and his Maine is stunning along with his bushy silky tail down to the tufts between his toes also which I hear is another Nebelung trait. LOVE em so so much as I do him.
I’d really like to think he IS a Nebelung but the adoption agency simply noted on his records a grey long haired domestic. (Just as I’m typing this Tufty (Zeke) jumped up on my bed delivering his lil toy pipe cleaner ring to me. He fetches it when I toss it n brings it back to me for more play. Often he’ll bring it into bed when he cones to sleep with me which is just what he’s done. He’s very good at fetching toys n carrying those wand toys with things hanging on end around the house or bringing up onto bed, very clever young guy.
has any one ever googled that you can do a cat DNA test to find out what breeds are involved? If anyone knows of such let me know. I’ll be googling to see as I’d be very keen to know both of my cats background.
below is some pics of Zeke (his adoption photo which made me fall for him), with his toy ring, then some in last 6 To 12 months (including his brother Hudson who is “apparently“ a Russian Blue x Ragdoll )> sorry I got carried away adding pics lol. 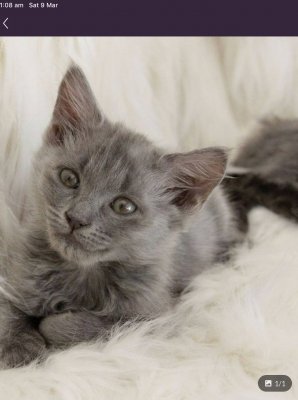 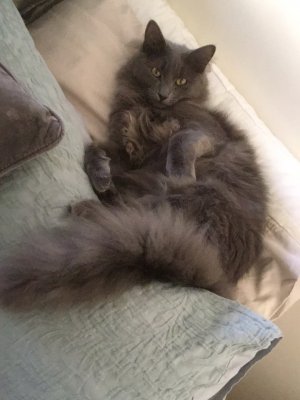 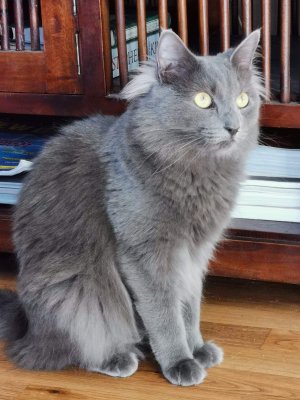 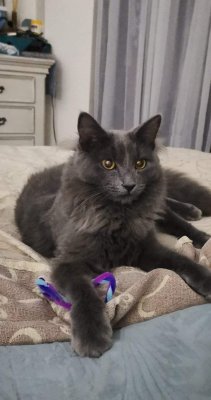 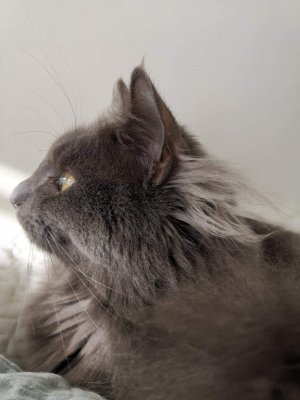 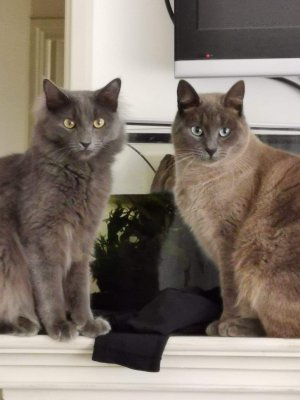 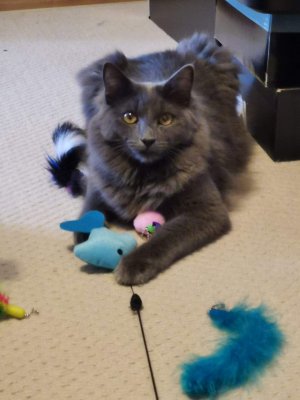 went to google DNA testing for animals as soon as I’d submitted above post and yes you can have cats tested...awesome