Free adoption day at a shelter

I had to pick up more meds for Leroy today. I brought along some donations for the attached shelter. Turns out the shelter was waiving adoption fees for small animals for the day. I dropped off my donation and went to see the small animals. Just to "look" but you know how that usually goes Long story short, I wound up adopting a mouse The application was easy. I'm surprised no one questioned why I wanted to adopt a mouse when I have two cats. I've had mice before so I'm know how to care for them and all that. I still have the mouse cage and accessories from my last trio.

Leroy and Emma have zero interest in mice. They seemed interested when I put the mouse into his new cage (box, really. It's a modified storage box) but then lost interest. I would like guinea pigs (plenty of them at the shelter) but I have no space for a cage and I don't know how the cats would react to a critter the size of a football. They've never been around anything larger than a gerbil.

My new furry addition is an approximately 7 month old lilac male. He's been at the shelter for 3 months. His original owner no longer had the time to care for him. Well, mousie will get plenty of attention now

Yes, I know how dangerous a free adoption day can be since I have to tell myself not to look, not even peek. We also donate to the shelter where we adopted Neely and our dog, and like yourself check out the newcomers. There should be a 'beware' sign for soft hearted people.

I managed not to go into the cat area. That's even more dangerous I'm at my limit of 2 cats anyways, although technically I could get a third since Emma isn't registered with management

A teenager was pushing a pet stroller around the shelter. I did a double take when I saw that it was a guinea pig inside She was looking for a companion for the guinea pig. I hope she found one yesterday

I'm glad I was there early because there were several people looking at the two tanks of mice, each containing just one mouse, while I was waiting for my application to be approved. I'm glad I got the mouse I wanted

although it wouldn't have mattered if I got the other one, a slightly older champagne colored male who was more skittish.

The mouse seems to have settled in ok. He's barricaded himself in the igloo

The entrance is blocked off with a pile of bedding. He's used the wheel and found his bottle. I'm not sure if he likes the food which is actually rat food because that was all the shelter had but a few pieces isn't going to do any harm until I can get mouse food. 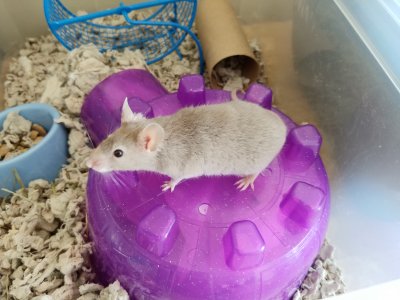 The mouse is very cute. I used to keep mice and rats (which make very good pets) but there’s a lot of small mammals I’d be weak on adoption day. I work at a shelter and it’s truly hard not to bring home the lovely cats that are so sweet but not type A- basically the shy overlooked ones.

Petfinder is bad for me. I’ve never adopted an animal through petfinder but oh the temptation!

I Just saw the updated shelter web site. Most of the small animals were adopted out over the weekend

It's strange, all of the mice I've ever owned have been male and free

I don't have a preference for male or female critters. Or cats. If it needs a home, I'm open to it

She was puzzled until I sent her the pictures

The shelter was calling the mouse Ballsey, probably his original name. I'm not sure if I want to keep it or not. Ballsey is already spoiled - he has a nice heating pad under half his box to keep warm Emma wants the heating pad but she has to settle for her SnuggleSafe. Ballsey doesn't like to be handled so I need to work on that.

Congratulations on your new baby!!! Ballsy is quite a name... He is so cute!!

Are you going to get your mouse a friend? I've only had rats and not mice but rats are highly social. No idea if mice are social though. I'm not a big fan of mice but your mouse is pretty cute. He just looks like a small rat.
W

Males aren't. Male mice will fight to the death.

I had a tankful of female mice once. They were cute, and amused the cats by running on their wheel and all that, but phew! Mice cages are smelly. Even though I'm used to cat odor and ferret odor and dog odor, I couldn't handle that odor so I didn't get any more mice after they passed. They were fun though.

No, once a male mouse has been housed alone you cannot add a male companion to the same tank. They will constantly fight. A female companion would result in lots of babies My last trio had lived together since they were 4 weeks old so they got along just fine.