Got another bike ride in-only got to the top of hill before cemetery-it was windy from the southwest and wasn't sure if it would affect my ride back to work-it did. It's warmer today too-- about 70 and the breeze. A nice spring day! I still prefer it 55 or 60.

I'm glad you all liked the horse riding video. It was a nice ride, can't wait for the next one.

I did an hour of yoga on Monday and Tuesday. Today I did 45 minutes of just Sun Salutations. That's a lot of press-ups! My arms are really sore now. After that I decided to make the most of the spring weather and went for a walk.

90 minutes walk in the woods.

Norachan said:
90 minutes walk in the woods.
Click to expand...

Do you have ticks in Japan? Walking in the woods sounds lovely, but I'm so paranoid about ticks now, I barely enjoy gardening in my backyard.

We do have ticks, yes. Big fat deer ticks. They usually stay in the bamboo, where I don't walk anyway. Button Moon has come home with a few on his ears from time to time. It freaks me out, they are such horrible things.

The best way to get them off a cat is to put a tiny drop on those flea or worm meds like Profender of Frontline directly onto the tick. They die and drop off really quickly.

I wonder why you can't get long lasting anti-tick and mosquito medicine that works on humans for a month at a time?

Someone really, really needs to concentrate on creating a human-safe anti-tick medicine. The whole concept of a spider-like bug digging into my skin creeps me out. Then add in the Lyme Disease aspect, and it becomes a bit scary.

rubysmama said:
Someone really, really needs to concentrate on creating a human-safe anti-tick medicine. The whole concept of a spider-like bug digging into my skin creeps me out. Then add in the Lyme Disease aspect, and it becomes a bit scary.
Click to expand...

I know! It gives me the Heebie-jeebies just thinking about it. I had to pull a tick off of Hiro's ear this afternoon. I've just ordered a load of Frontline and anti-tick and mite spray for all their bedding.

Creepy-crawly season is upon us!

I did an hour of yoga this morning, then spent about two hours working on my latest outdoor project this afternoon.

Wasn't sure if I would make it as it was pouring rain this morning. Didn't get as far-strong strong winds and they are doing construction on the next road so just said forget it and turned around. about 4 miles then on way back-went farther the other way to eat up minutes. Windy and humid out.

Yep Jon found a tick crawling on the pillow on couch-he also roams the woods-so it could have been him bringing it in. Tonight is frontline night.

Norachan said:
I know! It gives me the Heebie-jeebies just thinking about it. I had to pull a tick off of Hiro's ear this afternoon. I've just ordered a load of Frontline and anti-tick and mite spray for all their bedding.

Creepy-crawly season is upon us!

I did an hour of yoga this morning, then spent about two hours working on my latest outdoor project this afternoon.
Click to expand...

There was a snail on bike path today, so I guess we will have other creeps soon too. Last week it was -13.8C at coldest place of this country.

There are still snow at shady places like ski paths, but only a little, it has been melting quite quickly now.

Today I did ride 1 hour and 45 minutes with quite hard intensity. There was 8 minutes where my heart rate was 159bpm while maximum I could get it was 171bpm for today.

Of course it might not be wise to do such when one has likely cardiological issues, but at least there is chance of quick death instead of slow...

Next week turbo trainer will arrive, so I can cycle indoors, that should make exercising bit more efficient as I should be able to follow a plan and do more frequent training, despite pollen season is near.

Also there will be less mud on my mouth, even today hardly skin of my face was visible from all the mud.

Is there some rule that you are not supposed to visit a grocery store during your MTB ride, people did look me bit funny from some unknown reason?

I wonder if mud exists in SoCal? I don't think I have ever seen a pic of mud from there, it is always so nice in pics

I'm a bit worried about how many bugs there are around already. The cats don't usually get ticks on them until about June, but I've pulled four off them already this week. Last winter wasn't as cold as it usually was. Only got down to -8C whereas it's usually -20C here in February. I guess we're going to pay for the mild winter now.

45 minutes on my bike yesterday. I've just done 45 minutes yoga. Going to do more outdoor work this afternoon, then another yoga session after that.

Ticks on cats is yet another reason why I'm glad Ruby is happy being an indoor cat. I just worry about me bringing one in to her!

We had a milder winter too, so I'm sure that mean more bugs this spring/summer.

I went for 2 short walks yesterday. Back to rain and showers for the next few days. I'm thinking I should finally try doing some yoga.

We had thunder today, I don't recall there being thunder this early quite often, we still have good bit of snow!

Yesterday I did 1 hour hike and there was 30cm of snow at forest areas. We had more snow than usually so it takes time to melt.

Should of brought camera with me.

There was some insects on puddles of water, kind that jumps on top of water, some flying things and spider nets, it's still below freezing during the nights though.

This site looks weird now, some fonts of clickable things like post reply are huge in size and red from the top is missing.

rubysmama not sure which ones I posted before, but these are nice beginners classes.

Thanks for the yoga links

Definitely beginners for me.

Jogged 11 KM on Friday and got myself a beautiful sunburn

jtbo Here's my old bike Jon helped dig out of the shed- I bought it in 1997? 2001? Forget what year.. $360/380? It was normally $599 but on sale- Looks like it's got high tech hardware! I got Jon to pump up tires-I lubed chain/moving parts-road around my neighborhood for half an hour. The seat hurts and handle bars I need to change-I don't know why I thought this frame was too small-the handlebars sit too far away and the seat I need to slide forward-need an allen wrench- I was surprised how well it works! no skipping or clicking. Perfect bike! 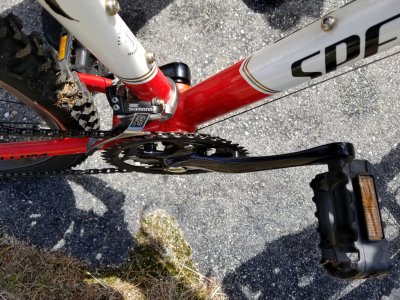 I am so excited to get some more riding in! I just need a bigger shed because there's not much room for it at least not easy to get in and out- This spring there's lots of junk I will put on side of road.

oh I cleaned out my truck and worked on my office clutter- 2 hours of sweaty moving stuff and carrying to truck-that counts right? When I get rid of the clutter in my office I want to put a sleep sofa in there and a spinning stationary bike along with tv and internet modem for watching netflix and spin during the winter.

Kimbers36 ! Don't forget to wear your sunblock though.

foxxycat Mine is built for comfort rather than speed.

I've been working on my upper body strength over the past few days. I did 1 hour of yoga focusing on inversions and core strength, 90 minutes focusing on twists and balances.

I need to get some long walks in too, but I keep finding things to do in the garden and spending all my time out there.

Got my ride in yesterday. Spent a few hours transferring parts off the old bike onto new bike. Seat, speedometer, lights and other stuff. The ride was good out-but the seat kept going down-I didn't have that screw thingy tight enough for the post that goes into the frame. I think I fixed it last night. If it keeps going down I will have the guys weld it shut for me as I have no intentions of selling it. I didn't get a change to go fast down that hill I wanted to try because I had to stand up and go down the hill as seat wouldn't stay put.

Got another ride on lite bike. top speed 30 mph but It was wiggling as I pumped harder. I need to learn to keep my upper body/hips still while spinning..and it was pretty windy out. Got to almost top of hill right after fire station-I had 3 minutes to spare but the wind was high and I didn't want to be late back to work. I ended up going back to work then past it to the end of the road and turn around. cruising at 23-25ish with wind on my back. Turned back to work- it was 15mph and a struggle against wind....man if there was no wind imagine how much faster I could have been? The seat is still too low for me but I am hesitant to mess with it=at least it didn't go down this time...time to adjust it up a hair.