I'm trying to decide what to make for dessert for our Thanksgiving dinner. Rick just wants a pumpkin pie. Rick's mother wants a chocolate-salted-caramel pecan pie; I made one last year, I think it was, and it was a huge hit. And my GF's husband asked me about sugar cookies; he's really hungry for sugar cookies and he knows that I usually have some kind of cookie on the dessert tray. Me, I was just going to get an apple pie out of the freezer.

What are you making for Thanksgiving dessert? Anything in particular? You're welcome to come here to central PA!

I always make icebox cake with the Famous* chocolate wafers & homemade whipped cream, garnished with lots of chopped walnuts and maraschino cherries. If I didn't make it, my friends who I spend Thanksgiving with might actually disown me at this point.

(*I dunno why they're called Famous, seems like no one's ever heard of them)

Pumpkin pie (mom's recipe). It is the best pie I've ever had and it will be lucky if it makes it through the night. May have to make 2.
R

I am not a baker, or for that matter much of a cook,so I will probably just pick up a pumpkin pie. The other desserts all sound yummy, though.

Costco has a big/oversize pumpkin pie made with the same pumpkin that libbys uses, if I'm traveling this is the one

We often have Thanksgiving with other people so we don't make dinner here. But I always make pumpkin parfait squares sometime during the Thanksgiving season. It's an old recipe that used to be on Libby's pumpkin cans, and my mom made it every year for T-Day. 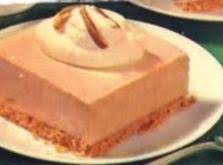 Oops I forgot a pic... Here's what was left of last year's (TWO) icebox cakes last Thanksgiving.. I have to admit, it's always a point of pride to have my dessert get wiped out at a function before others' do...

betsygee said:
We often have Thanksgiving with other people so we don't make dinner here. But I always make pumpkin parfait squares sometime during the Thanksgiving season. It's an old recipe that used to be on Libby's pumpkin cans, and my mom made it every year for T-Day.

Click on where it says ‘pumpkin parfait squares’. Or for easy reference,

betsygee said:
Click on where it says ‘pumpkin parfait squares’. Or for easy reference,

Thank you. Didn't notice it was a link until you pointed it out. I need to try these.

Considering that it will just be me and the cat kids I can have whatever I want. Maybe I'll pick up a key lime pic from Publix. They have good ones. I'll leave it in the freezer and pick at just because I CAN.

Winchester you know you'll make all of it. Who else thinks Rick's favorite snickerdoodles will also wind up sharing the cookie tray?

I always want pumpkin pie on Thanksgiving. There are always different kinds of pie and cake there but I always want a slice of pumpkin pie. I then usually grab a serving of some other dessert to take home for the next day.

I always have to make chocolate chip cookies and candy bark. I found a recipe for pumpkin mousse I'm going to try as well. Every year I make a big cake. I was trying to decide between four recipes and last night I went though them with my husband and decided on the chocolate salted caramel cake.

We go for the classic in my house. I'm thinking of tweaking the pumpkin pie this year and do mini cupcake sized pies, that way my dad doesn't eat the whole pie himself.

I really only eat dessert on holidays. Between being allergic to milk products and inheriting a salt tooth instead of a sweet tooth I eat desserts rarely. But this year we will do a non-dairy pumpkin pie or non-dairy ice-cream.

) apple pie. Truthfully, I have baked it so often that I am kind of tired of it and would rather try something else.

I worked 34 out of 72 hours so far this week. And there was a blizzard.
By the time I finally got to the grocery store last night, the chocolate wafers to make icebox cake were gone. 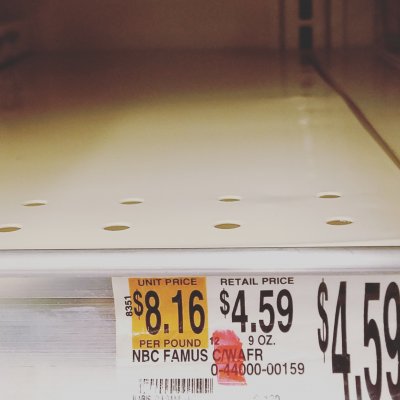 People love my icebox cake and I feel awful I can't make it for them this year! It's just bizarre I always joke about how they're called "Famous" but no one's ever heard of them but suddenly this year everyone has?

So I went to the bakery department to find some kinda inferior substitute dessert .. I asked the poor overworked kid behind the counter if it was too late to get something written. He sighed a little and said that could be done. I asked if he was allowed to write swear words. That cheered him up quick! Then he said, "Only one problem, there's only this ugly bright green icing left."
I reassured him, "Oh, no, yeah, that's actually even more perfect."

So here's what I'll bring today. (pic is edited in case anyone's offended) 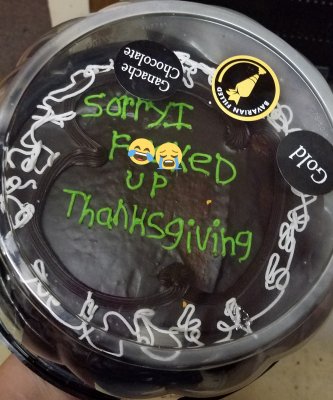 A few customers and cashiers had a good laugh, anyways.

Love it! This is something everyone will have as a fun memory in years to come.

I'm happy to report that it was a hit.