Some kind of spray to prevent furniture scratching?

Jackie removed the vinyl scratch guard sticker & apparently really likes sticky tape. This is what he did as soon as I applied the cat training tape!

I had to shoo him away.

Mind you it isn’t about saving this old piece of furniture. It is about breaking this bad furniture scratching habit he learned from his siblings at Nana’s house.

note the scratching post/hammock bed right next to the chair. Plus he has a huge cat tree in the living room.

So what kind of spray will help deter him from scratching the area in the lazy boy that I put the no scratch tape. 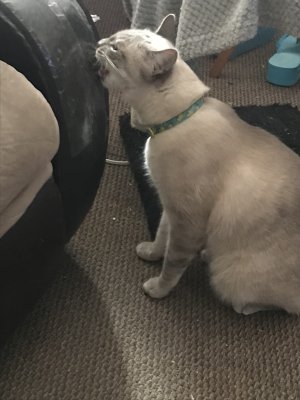 Not a spray but this stopped the scratching immediately in my house. I've had some luck with Nature's Miracle Pet Block. It might be individual cat dependent, since I've heard it didn't work at all for some and worked miracles for others. You do have to reapply it fairly often, but I guess that's the case for any spray.

I use Feliway spray to stop Mocha from scratching the furniture and area rugs. She was three years old when I adopted her and didn’t understand scratchers, either vertical or horizontal. She’s six now and very good about using her scratchers, although I do occasionally have to spray something lightly again.

This Article may have some additional tips for you but note #22 about what type of spray repellent to use:
23 Proven Ways To Stop A Cat From Scratching Furniture – TheCatSite Articles

Let me add a note about Feliscratch. It’s supposed to attract your cat to the scratcher, so you put it on the scratcher or scratchers. It stains them blue so be careful if you use it. It didn’t work for Mocha, but every cat reacts differently.

The Feliway spray that I use to keep her from scratching the furniture and rugs doesn’t leave any marks or stains on my stuff. You should be sure not to have any scratchers close to where you spray. You don’t want to get it on those!

Tobermory said:
I use Feliway spray to stop Mocha from scratching the furniture and area rugs. She was three years old when I adopted her and didn’t understand scratchers, either vertical or horizontal. She’s six now and very good about using her scratchers, although I do occasionally have to spray something lightly again.
Click to expand...

How did you get Mocha to start using her scratchers? Our former feral doesn't understand them even though she sees her kittens and her mate use them.
K

you might try these, ten to a package and not that expensive. They work because they do not satisfy the urge to scratch since they are slick.

Thanks, Kflowers, but I figure if I do this she will just find other places to scratch. I want her to use her 3 posts. She doesn't respond to catnip. I have rubbed her cheek with a cloth and then rubbed it on the posts. I am out of ideas and I can't buy every post on the market to see if she likes one.

anticus said:
How did you get Mocha to start using her scratchers? Our former feral doesn't understand them even though she sees her kittens and her mate use them.
Click to expand...

Observation, persistence, experimentation, and lots of patience! I tried several kinds of scratchers: horizontal, vertical, cardboard, sisal, carpeted, tall, short. She ended up preferring a shorter, sisal post which, at the time, was one of the less expensive ones. I put one in every room where she spent time and in places that seemed to be where she ended up during her zoomie episodes. She loves to tear around the house and end by using a scratcher.

I also consistently sprayed Feliway on places she seemed to gravitate to for scratching. Over time, she stopped trying. She does still occasionally (every couple of months) try out her claws on one of my expensive area rugs, but I just mist it again and she stops.

Unfortunately, there’s no magic or one-thing-fits-all cats solution. And while the Feliway has worked for me, I know not all cats respond to it. Keep trying different things and watch how your kitty responds. Good luck!

anticus said:
She doesn't respond to catnip.
Click to expand...

I don’t know how long you’ve had your former feral, but Mocha is a former feral, too. When I adopted her, she didn’t react to catnip at all. But she was also terribly frightened and untouchable. I just thought, “Oh, well. Not all cats respond to the ‘nip.” A year or so later, I bought a catnip toy for the other two, and Mocha was all over it. She loves catnip now. My theory is that she was in self-protect mode and so mistrustful of humans that she wasn’t going to relax enough to let the catnip affect her. Once she learned to trust us, she let loose!
K

Some cats don't like catnip, it has no effect on them. Some, as in some I've had, well, catnip removes the thin veneer of civilization so we don't go there any more.

Kflowers said:
Some, as in some I've had, well, catnip removes the thin veneer of civilization so we don't go there any more.
Click to expand...

Yes, Max was a mean drunk. He was forbidden any catnip.

Mr. Meow ! One post is sisal, one is carpet one is corrugated cardboard. I will try all of your suggestions. It is very difficult to keep her attention since the kittens are all over the house and making all of us stressed. But I will keep some treats with me all the time and when I see an opportunity I'll try to teach her. I interrupted her scratching our antique dining room chairs and scratched the post myself to show her that's where she should scratch - and she looked at me like I have 3 heads. It is frustrating because all the kittens use the scratchers (as well as everything else) - and Midnight uses them too, and she usually wants to do everything he does. Except scratching the posts. Grrrr.

Tobermory - we have been feeding Pumpkin since November, and she moved inside on March 17th. She gave birth a little over 2 weeks later. She is still learning us and we are still learning her. When we had to take her to the vet and hospital a few weeks ago, the medical staff couldn't believe she was ever a feral, much less 3 months ago - she was that sweet and calm.
K

One thing, small but important. Anything you're going to spray your furniture with whether to attract or detract the cat, test it on a part of the fabric that does NOT show. Sprays can leave spots, change colors, though most have no effect on the fabric, you don't want to take a chance when you don't need to. let it sit over night before deciding it's okay.

anticus said:
I interrupted her scratching our antique dining room chairs and scratched the post myself to show her that's where she should scratch - and she looked at me like I have 3 heads.
Click to expand...

Yes, I tried that too, and got the same response!

“Mochie! Mochie, look! Look, Mochie! Scratch, scratch, scratch! Scritch, scritch!” in an excited tone of voice as I dragged my fingernails over the sisal. Mocha just stared at me, unblinking. “My new hooman is demented,” she was probably thinking.

Mocha is a sweetheart and extremely loving—a real lap kitty—but even after three and a half years I can’t pick her up and I have to give her gabapentin to get her to the vet. You’re lucky!
K

It's different with Mocha, Tobermory, we all know Mocha would assume you want to share everything that you call your own with her.

Tobermory Pumpkin will no longer let me pick her up, or even pet her for more than a few seconds, after I had to give her oral antibiotics for 10 days, plus I torture her babies by putting them in a pen overnight and I don't let her eat the kittens' food. I am a horrible human and she is probably reconsidering her selection.
You must log in or register to reply here.
Share:
Facebook Twitter Reddit Pinterest Tumblr WhatsApp Email Link