Should I Separate My New And Old Cat? Did I Mess Up Their Intro?

I adopted a 2 yr old new cat (NC) 3 days ago. I had one resident cat (RC) who is 4 yrs old, and has always been a solo cat. Both are female domestic short hair. Since I brought NC home, I followed the traditional cat introduction steps by having prepared a spare room with all the essentials for NC, but NC meowed all day to be left out until her voice was hoarse. Even after going in to the room and showering her with attention once in a while, her incessant meowing broke my heart so I very cautiously let her out... I know I might have messed up by doing this. NC seemed very confident in exploring all around the house, even goes right up to RC's food bowl and eats from it, drinks from RC's water bowl (despite having a full set of her own, which both she and RC will eat from), sleeps in RC's favorite cushion, and has even peed / pooped in RC's litter box. Again, I recognize that this probably isn't supposed to happen so fast. I didn't stop NC because I wanted to see how RC would react. RC hissed at NC as she was leaving the litterbox, but otherwise did not fight her. RC still uses her litterbox after NC uses it, will continue to sleep on her favorite cushion, eats from her bowl after NC eats from it, etc...

RC growls and hisses at NC when she comes too close, sometimes makes a swatting motion with her paw, but has never fought NC. They often just engage in long stare offs from across the room. RC sometimes follows NC around to observe her in a crouched fashion, but usually doesn't make any advances. When she does run up when NC is getting too close to a favorite item, she stops in front of NC and just hisses. When RC hisses and postures, NC never hisses back, and either sits until RC leaves or NC slowly backs away. NC is more playful and will often run up too close to RC during feeding or play (since NC just came from a shelter, she is more used to a multi-cat environment). RC never stops NC from walking around the house, and they can both be in a room just fine. Tensions just rise when NC uses RC's stuff, like her favorite scratching post (MY ENTIRE COUCH), gets too close to her (half a meter?) or pees in her litter box. I realize that using RC's litter box is probably bad on me, but I'm not sure if I should stop her or not because eventually I do want them to be using the same litterbox.... As far as I can tell they both are eating and using the litter box quite normally, just that RC hates NC. RC behaves normally with me, has not become hostile with me, and has not acted out in any destructive manner.

I've been wondering if I should separate them again or if this would happen regardless if I'd done the full course of separation. RC has no issues smelling NC or even being in the same room as NC, as long as she doesn't SEE NC. I actually held NC and covered her eyes with my palm, and I was able to literally put her right on top of RC with no reaction from RC. As soon as I removed my hand and they made eye contact, RC became hostile. Is there any use to separating them? Or should I keep letting them be together while supervising their interactions as much as possible? I figure that RC can't be happy that NC is using her stuff and eating her food (I let NC eat RC's food because RC is leaving food for some reason, she usually eats all her food in one go since I do timed feeding. And NC is malnourished and very underweight), and I don't want her to feel hurt. I left them alone today for 9 hrs while I was at work, and when I returned they didn't seem to have fought, just the same old occasional hissing from RC.

Any advice would be appreciated. What would you guys do? I have read in some places that hissing between cats is normal, but I have also heard that you can mess up cats' relationship for ever because of a bad intro. I am hoping they will eventually learn to like each other more, and I hope I haven't messed up these two cats' introduction.... Thanks in advance!

Well, that intro was VERY quick, BUT...there are some good things. There is a bit of posturing and hissing, but no actual fighting, and no one is abandoning or guarding litter boxes and food sources (btw...you should have 3 boxes, 1 per cat, plus 1. Some recommend the same with food sources, as well.). So far, so good. I'd supervise their time together as much as possible, but the hissing? Right now, unless things begin to escalate (WATCH FOR THIS), it may well be a case of, "A cat's gotta say what a cat's gotta say. It's a kitteh thang, you wouldn't understand." Should things begin to escalate, YELL FOR US! There are articles on how to introduce two cats, and reintroductions are done the EXACT SAME WAY, so the chances of things being "ruined forever" are not any higher than any two cats meeting.

I agree with Mamanyt1963. While that was quick, if all you're getting is some posturing and hissing, things seem to be progressing. The one thing I would hesitate with is leaving them together unsupervised while you're at work. Just because if something did happen, it could get out of hand and you wouldn't be there to intervene.

You might find some more introduction ideas here: How To Successfully Introduce Cats: The Ultimate Guide if you haven't already looked.

Thank you so much guys! Tbh I was afraid you would berate me for not having the willpower to keep them separated like I knew I was supposed to... thank you for the support and advice.

Things have escalated in a way, but have also toned down in others. I played a video of birds and squirrels, and RC jumped up on the bed close to NC to watch the video. Sat there for a few mins before losing interest. I also got them to eat somewhat close to each other. RC also went and used NC's litterbox today, I'm thinking maybe out of spite since she saw NC use hers.

The posturing and hissing somewhat escalated to smacking on NC's head and her behind when she's walking around. NC now hissing back and asserting her ground, and still never initiates hostility. After swiping RC just runs away and so far there has not been an extended confrontation. The swiping definitely began after NC used RC's litterbox... When I see her going to RC's litterbox I grab her and put her in her own now.

I'll definitely separate them when I go to work. If I can't hear the sad meows I can't be heartbroken right ?

And OH, are they ever masters of the "sad meow." Stay strong! You'll get there.

Now that you have two cats I would encourage you to add a second Litter box. It keeps the boxes fresher, if there are litterbox territory issues it helps and for cats that are sticklers about clean boxes, it helps make sure you have one. 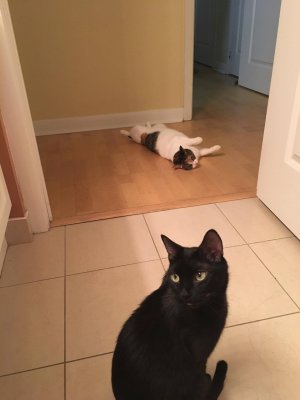 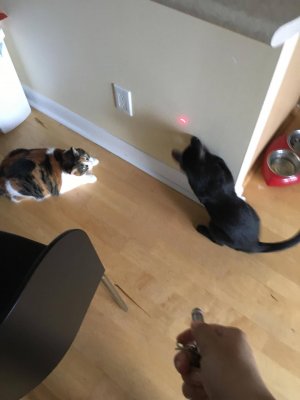 Thanks Susanm9006, I had 2 litterboxes prepared when I brought the new cat into the house. But they immediately started interchangeably using each other's litterboxes, basically whatever is closest it seems. I will keep both litterboxes out though.

I have really good news! They are getting along a lot better now that I separated them during the day while at work. That was definitely the right call! RC no longer growls at all, hiss volume has gone down, and seems only halfheartedly swiping at NC now with no other outward signs of hostility or posturing. No more flattened ears or aggressive crouching. She no longer spends excessive time observing NC and doesn't seem to mind anymore when NC scratches her favorite post (my couch...

) or goes towards her litter box. Both slept on my bed last night, and can eat treats fed from the same hand. I got them playing together with the laser pointer. RC was so into it that she accidentally barrelled into NC, a small hissing fit ensued but they continued to play after. I think it really helped that when NC was growling before or posturing to attack, I would pet her the way she likes to calm her down and distract her. I would then get NC to come closer and closer until RC reached her limit and backed away. I was originally afraid this would reinforce the aggressive behaviour but luckily it seems this didn't happen. They are able to tolerate each other at closer distances now and don't give each other trouble as they pass by each other in close corners or passageways anymore. Just a lot of furtive and concerned glances. I am getting a second cat condo today so the two of them can share more space. I think I am very lucky so far, this could have been very bad. Hopefully it continues to progress in a positive direction. Thank you all so much for the advice and support.