I know, I have the worst time with air plants! I think everything is going great, then, bam, one day they have brown tips and in a few days it looks like a dried dead spider. I've never been able to save one after the tips go brown. I guess you could say they're "easy" to keep---no soil or pots or anything---but they aren't easy to keep alive!

I bought 2 new BIG succulents from Sam's Club (I know, it sounds weird, but a lot of my plants are from Sam's). I'm such a sucker for new plants. I haven't decided if I'll take them to work or try to keep them at home. Costco had the big succulent displays on sale again but I managed to resist this time. I still have one from last year (yay!) at work and don't have room for another.

I'm going to take my spider plants home from work, repot them, and let them live outside for the summer. But I need something to replace them in that corner, so I think I'll make a multi-small-pot display with some of the succulents and some of the baby spider plants.
W

Here are the new ones, same kind, different color, I think: And this is one from the last time Sam's had succulents, it had the pups when I bought it and I'm nervous to remove them: And does anyone know what this is? I thought it was a snake plant but it doesn't look the same as my other snake plant. I'm repotting it which is why it's naked . Willowy said:
Here are the new ones, same kind, different color, I think:

And this is one from the last time Sam's had succulents, it had the pups when I bought it and I'm nervous to remove them:

And does anyone know what this is? I thought it was a snake plant but it doesn't look the same as my other snake plant. I'm repotting it which is why it's naked .

Beautiful! Love the colors, especially of the pinker one in the first picture.

Nice on the extra pups! The tip that I've heard when and if you are ready to separate is to try to have the little ones keep some roots when they are separated from the adult. If not, they should hopefully grow roots, but just makes it easier for them to grow if they start with roots.

Not sure what the last one is, it has a really nice speckled leaf pattern!

How many spider plants do you have/any babies on your plant? I kept one when younger, and loved how easy they were to make babies.
C

I have 2 big spider plants, one dark green, one light green/stripey. They have babies constantly, I try to cut the shoots off before the babies get big because it makes me feel bad to throw them away, lol. But I've been neglecting them lately and they both have several really big babies so I'm going to grow them out, if I don't want them I'll put a free sign on them and I'm sure someone will take them. I might also try to start some pothos babies.

I cut one of the pups off that one succulent last night, and set it on some dirt to see if it makes some roots. And I had some small ones that looked nearly dead so I cut them back to the live part and set them on the dirt to root too. I hope they make it.

What does one do if a succulent is too wet and/or is getting root rot? Do you just take it out of the pot and let it dry out?
W

Neat. I'm sure if you offer for free, someone would take them

A lot of people seem to have taken up gardening during this time to keep busy. I just found a facebook virtual garage sale group for my neighborhood and was able to pick up a good sized pot for free yesterday! There is no hole, but I splurged on a drill that will be arriving this week that can drill through ceramics using a special attachment.

Keep us updated on the pup you trimmed off. Rooting for it to root!

If a succulent gets root rot, it is suggested to take it out of the soil and let the roots dry out. One of mine I did this to also had much organic soil wrapped around its roots, so I clean the dirt off with water. Organic soil holds a lot of moisture, which is why I did that. I cut off the rooted roots, too. After a couple days, the succulent roots should be dry and calloused over, if you cut any. Then they should be repotted with dry substrate and not watered until signs of thirst appear.

I've also seen people cut the tops of the succulents off and stick the tops in dirts in hopes they will root. Some people keep the bottom, too, if they think it might be okay and sometimes new branches/leaves grow.

If you had any plants or pups that were partially dead, or a plant that had rot that you don't think could be saved, but there are healthy looking leaves you can carefully pull them off and see if they will propagate. Not all succulents do this, but all three you posted look like the kind that should.
W

Just because I think it's cool. . .I stuck some baby spider plants in a vase full of Orbeez to root them. One root grew through the Orbeez: Here are my current air plants: 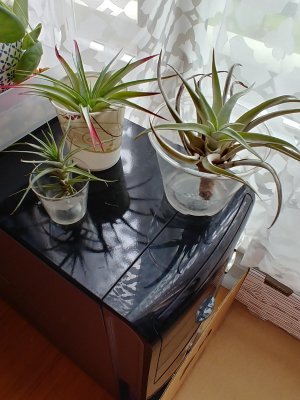 I had more last year but most died

I bought a mini succulent from the florist shop today

Yeah, $10 is expensive for a mini plant

And the cat planter

The planter has no drainage holes so it's only functional as a decorative pot to hold a plant in a standard boring plastic pot. 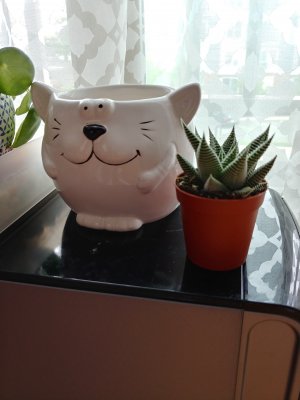 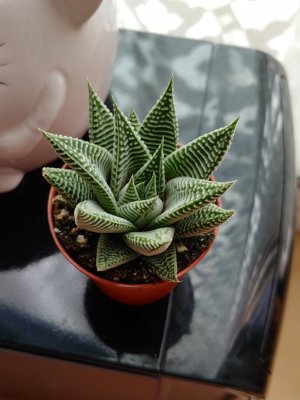 Love! That should be a type of Haworthia, specifically looks like it could be a zebra plant. The plant looks very healthy! That's awesome you got the planter, too!

Wow, didn't realize air plants can have bright colors, like that red tipped one. So pretty! The one I had was plain green and still very tiny.
C

Never heard of Orbeez so looked it up online. Hah! Have you ever used Hydrogel? Polyacrylamide crystals that absorb and hold several times their own weight of water. Different from the stuff in baby diapers that absorb urine and hold on to it. Hydrogel absorbs, releases, repeats. Very fine grade sometimes used when planting sod or to dip bare root trees and shrubs before planting. Medium to coarse grade mixed with potting soil for ornamental containers to reduce frequent need for watering.

Of course someone saw the practical material and poof! found a way to make it a plaything.

What would be the best way to water the succulent? Soak the bottom half of the pot in water? Water from the top?
W

LTS3 said:
What would be the best way to water the succulent? Soak the bottom half of the pot in water? Water from the top?
Click to expand...

Great question! I'm still deciding which one I like better because people rave about bottom up. The ones I've watered a couple days ago in the terracotta pots are dry, but my ceramic planters are still damp. Just fyi depending on pot style you may want to monitor how long the soil takes to dry and make sure the soil doesn't stay to wet for too long. I've been keeping an eye on mine because I don't want to root rot any of mine.

Also, are you keeping it in the soil mix it came with? If there is a lot of organic, you may want to add other stuff to it to reduce the amount of moisture the soil mix can hold before it is watered.

I'm not sure what kind of mix the succulent is in. Probably a general all purpose mix. Do I need one of those catci mixes?
W

LTS3 said:
I'm not sure what kind of mix the succulent is in. Probably a general all purpose mix. Do I need one of those catci mixes?
Click to expand...

Here is a really detailed and easy to read guide that looks very accurate and helpful: Succulent Soil: The Ultimate Guide

I use half and half miracle grow for succents/cacti mix and perlite. I also added some aquarium gravel (used and rinsed with water) to some of these mixes for plants that I wanted less moisture retention and for my lithops. I may play around with some of my plants as different mixes may be better for different plants, too! It looks like on the guide you can probably use the general all purpose if you mix it in a 1:1 or 1:2 with a mineral substrate (perlite, gravel, etc.). You may want to clean off organic soil from the roots, if you can. Mine that root rotted had purely organic soil wrapped around and in the roots and probably influenced the roots to rot. Hope that helps!

I have a bag of perlite. It looks like I can mix 2 parts of that with 1 part of the regular potting mix I also have.

My Pilea is awfully droopy

Such a big difference from a couple of months ago. It was repotted last month but that hasn't helped. I water weekly or so. It gets plenty of bright indirect sun daily. I think I'll just get a replacement plant tomorrow from the garden center. 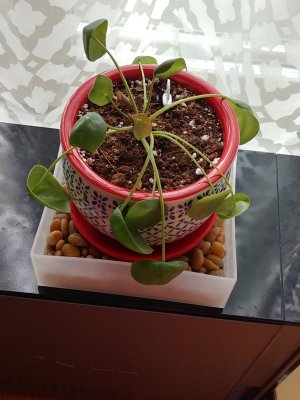 Any suggestions for a low light pet safe plant other than air plants and succulents? I want something for the kitchen which has no windows. I have an open layout so the kitchen does get a little bright indirect light in the mornings from the living room windows.
Last edited: Jun 6, 2020
C

LTS3 Pot looks out of proportion to the pilea, looks like it is in too large a pot. Potted plants do need some extra root room in which to grow, but only a little. Next size up, so to speak. If the pot is too big then plants cannot make proper use of the moisture when watered. As you have learned, their roots then rot.