Question of The Day. Saturday 1st of August.

Live on the beach, so the wildlife are: Seagulls.... yuck... and blackbirds, sparrows....

The back on the building slightly borders a marshland. There are a couple of brown rabbits which visit the central green area of the parking lot.

I used to live a bit further down, kind with the marsh around me. I saw possums, groundhogs, hawks, a rabbit, some finches, cardinals--even a black one!, bluebirds, along with the occasionally skunk, mice, etc....

In the summer, there are cranes on the river side..

I live in a small town, mostly houses for several miles in every direction . But I have have deer, turkeys, raccoons, opossum, ducks, rabbits, squirrels and chipmunks in the yard on a regular basis plus a variety of birds. And recently I caught a fox in my backyard video cam.

All this wildlife, how cool!

We live on the edge of a forest greenbelt and get to see bobcats, deer, and all kinds of rodents, birds, some small snakes, lizards, and frogs. Once I saw a fox. There have been reports of mountain lions in our area but I've never seen one myself.

This guy came through my neighbor's property yesterday. I've been watching them go through there, sometimes with their babies, for over 20 years, and never get tired of it. 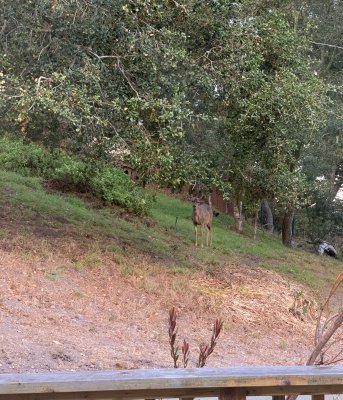 In my garden we have a family of blackbirds, as well as magpies and blue tits. We also get jasmine moths around this time of year, as well as regular moths, plenty of bees because of our wildflower patch, as well as wasps and honey bees. I've seen a chaffinch and starling in my garden before too. We also have pigeons nesting on top of our chimney.

We have a lot of minibeasts, especially worms. Also have field mice sometimes though we rarely see them - sadly only when they end up as Fudge's prey! Peacock butterflies and monarch butterflies also come into our garden. We have flying ants which are a pain in our garden too at this time of year.

We live in the suburbs of our capital city and only have a small garden, but it does still attract a lot of wildlife.

My backyard ends at a wetland/marsh so I see a lot of animals. There are lots of toads in my yard. I am always seeing them when I'm mowing my lawn. There are of course the typical animals you'd see in North America: rabbits, squirrels, chipmunks, various birds. I saw a Baltimore oriole in my front yard the other day and I don't think I've ever seen one before. I've seen sandhill cranes in my neighbor's yard. Other birds I've seen are robins, grackles, red-winged blackbirds (lots of these), chickadees, various finches, woodpeckers, and cardinals. I haven't seen them, but there are moles in my yard. I know they are there because my front yard is completely destroyed because of them. I'd like to get rid of them, but I'm having a hard time justifying killing them. If they were in my house, that would be a different story, but they aren't. They are in their natural habitat.

In our neck of the woods, we have deer, turkeys, foxes, raccoons, and occasionally, bears. There's a bear family around now, a mama with two cubs, but we haven't been able to see them. We have seen their scat in the yard. Lots of skunks. Bunnies and squirrels. We love to watch the bunnies and the squirrels; they're so funny. Lots of chipmunks. We see turkey vultures flying around from time to time.

One Sunday afternoon this past winter, I was sitting in the she shed, watching TV. And movement caught my eye. There were deer outside the northern shed window! I was so shocked I just sat there. And then, when I got up, they were gone. There's a mini deer trail between our house and the trees that border our property from our neighbors and the deer like to walk down through to cross the road. We've seen as many as seven deer at one time.

Although "they" say that mountain lions are no longer in Pennsylvania, I say phooey! to that. And so do a lot of other people. One night, years ago, I was coming home from work around 11:00. I turned to come up the driveway and there was a huge cat at the top of the driveway behind Rick's truck. I stopped dead. It was a lion; I know it was. And it turned and loped up through the yard. It was not a bobcat. No way. Too big. That was a mountain lion. A few days later, our neighbor came over; he wanted us to see the paw prints of what he still says was a lion. Although they haven't been "officially" seen in PA since the late 1800s, I think it is, people, including me, will swear on a stack of Bibles that they've seen them.

Mountain lions move around a lot. They have huge territories and travel to find new territories when necessary. So there may not be any resident lions, just transient lions on their way somewhere else.

Right now everybody here is freaking out because one was seen in town in Yankton. But it was a smart lion; nobody actually saw it, only caught it on their security cameras, and it's probably 50 miles away now. No reason to panic.

Basically, you name it, we have it, except for bears and moose, and even then there's occasionally one wandering through.

Human slave to Sinclair the Kitten

Sadly, we don't see a lot of wildlife around here. There's a little bat that flies past every evening, and the birds are slowly making a return to our garden now that Atari has stopped hunting them (he's been missing for very nearly a year and to be honest he'd be welcome to maul every single bird in a mile radius if it meant he came home). We see the occasional hedgehog or frog, but where we live is too urban to see much more than that. I do leave water out for anything that might be passing.

Xraystyle said:
There are rumors that there are still tigers in the DMZ (which is about 40km north of me) since it is essentially off-limits to people, but no one has ever confirmed it.
Click to expand...

Maybe they were released into the DMZ to deter any would-be defectors.