BellaGooch said:
I just pulled this Cranberry Skillet Cake out of the oven. i'm going to dust it with powdered sugar once it cools and serve it for dessert
for Thanksgiving

Thank you so much!
If anybody wants it, here is the recipe: Winchester I saw this and immediately thought of you: Just the right amount for your cozy holiday crew.

My daughter recommended a recipe for Morning Glory cake that she thought I would like so I finally baked it today and loved it. neely said:
My daughter recommended a recipe for Morning Glory cake that she thought I would like so I finally baked it today and loved it.

I made caramel/pumpkin/oatmeal squares. I'm not a huge fan of caramel, but you can't taste it much--it just adds a nice chewiness to the bars. 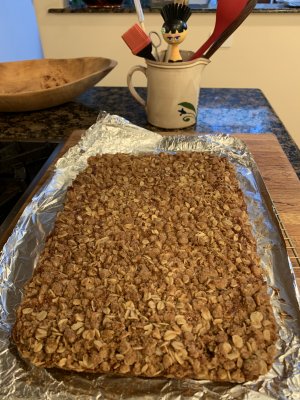 Yum, and the best part is you can eat them at breakfast or anytime.

You are all very busy in the kitchen! And everything looks so good!

Spent the morning in the kitchen, playing with yeast dough. English muffins and no-knead breads. Rick already gave his approval to the muffins. We're slicing into a loaf of bread tonight to make grilled ham and baby Swiss cheese sandwiches for dinner. Yum!

Both are from King Arthur. I really like working with that bread dough. No kneading required! Heart-shaped sugar cookies for V-Day. The chocolate took them over the top!
I also tried the Danish butter cookies again with the new tip. But they flattened out way too much. They're really good though. Winchester said:
Heart-shaped sugar cookies for V-Day. The chocolate took them over the top!
I also tried the Danish butter cookies again with the new tip. But they flattened out way too much. They're really good though.
Click to expand...

Of course they're really good - you're the Martha Stewart of PA.

Yesterday I made a Banana Coconut loaf, and added walnuts and chocolate chips. rubysmama said:
Yesterday I made a Banana Coconut loaf, and added walnuts and chocolate chips.
Click to expand...

I could really use a slice of that for dessert tonight.

If you're taking mail orders,

rubysmama , I can PM you my address (jk).

I made the Famous Dept Store blueberry muffins yesterday. Oh, so good! Yum! A couple years ago, Rick started eating blueberries. Oh, he still won't eat them plain, but he'll eat a muffin, or three, or a blueberry buckle. He even said that, for a blueberry muffin, it's darn good. And they really are delicious. I can see why so many people like them. I included a good teaspoon of sugar atop each muffin.
And our coffee order came in this morning. Black Cherry Bourbon and Vanilla Bean Bourbon. I immediately made a mug of Vanilla Bean and.......smooth, smooth, rich coffee. Yum! And I'm not even fond of flavored coffee! FWIW, I've given up on decaf and half-caff coffee. Life is too short.
Sometimes, there's a lot to be said for quarantining. Pam, your blueberry muffins look so moist and I can just picture eating them with a smooth cup of coffee.

Winchester , I remember those muffins! I remember going into The FAMOUS Department store, getting them with my mother. It was a ritual every time either my aunt or me and my mom, went into Boston..

They had so many varieties: Cranberry, banana, chocolate chip, apple; But the best were th blueberry.
OMG...do good.. reminds me of my childhood. I can picture the bakery in my mind. They also had the biggest swirl lollipops, I had ever seen!

artiemom , I got the recipe for those muffins from King Arthur and, supposedly, it is the exact Famous recipe from Jordan Marsh.

It was time to make the doughnuts yesterday. Rick's mom has been after me for doughnuts now for a week. I made Feather-Light Doughnuts and Portuguese Beignets.

This Sunbeam electric saucepan was Rick's mom's; she thinks it's late 1940s/early 1950s. Still works beautifully and it's all I use. The temperature dial is stuck at 375F, but that's OK bc that's the temp I use for the doughnuts. I don't even want to think about how many doughnuts that saucepan has fried! (And when I make doughnuts, once the saucepan is plugged in and turned on, Rick can't leave the house; he can't even go to the basement. I take the fire extinguisher out of the cabinet and set it on the floor by the kitchen table. It's the law! I'm that leery of deep-fat frying.) I made a pastry cream to fill some of the doughnuts, then made a chocolate ganache to drizzle on top. See that doughnut at the bottom of the second picture? The pastry bag had a blowout! There I was merrily drizzling chocolate and then phftttt! And chocolate went everywhere. I had some pastry cream leftover, so Rick decided to try to fill beignets with that. And we glazed some of the Feather-Light Doughnuts with a simple vanilla glaze. And now....I never want to see another doughnut until next time I have to make them! The beignets look a little dark, but they cooked beautifully; Dear Richard got a little heavy-handed with the cinnamon! Something always happens when I bake. Always. But they're delicious. (I'm a fan of the unfilled beignets; Rick likes the vanilla glazed doughnuts. We're taking some up to his mom this afternoon. She'll like them all. I did doughnut deliveries last night, too a bunch to my sister and BIL, and some over to Bob.