Grumpy, the community feral, likes to hang out in our yard, and, especially after watering, our flower beds.
In the Widow's Tears: Stretching after his nap in the Delphiniums And just relaxing on the grass Oh, Mr Grumpy reminds me of my cheeky boy when he's having his old man naps. I LOVE GRUMPY.

Meet Prue, she came from a litter where her siblings were called Piper and Phoebe haha She is hard to photograph during play, I usually get a black blur! This is Gemini ( & her k9 aggravation Cujo )
She's my first tortie!... the tortitude is real! My sweet little Luna at 4 months old. She’s a dark calico. I’ve had her for one month. Dash in her pictorial

Tortidash said:
Dash in her pictorial
Click to expand...

Awww... what a pretty kitty. 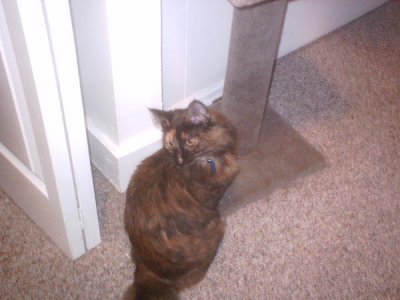 a.yomide said:
Heres my mila baby. Even though it’s more like mila sassy. I’m a first time pet mom and just picked her up last week.
Click to expand... 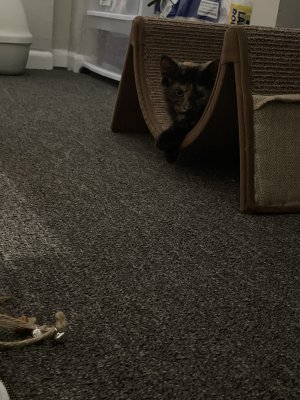 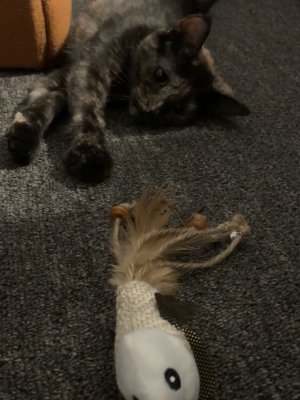 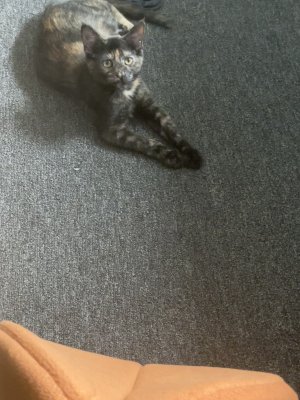 Not a picture of a tortie, but I just found this.

The Legend of Tortie Cats

Legend has it that many centuries ago the Sun begged the Moon to cover him for a while, so that he could have the chance to leave the heavens and wander freely around Earth. The Sun no longer wanted to be the center of the universe and wanted to be able to go unnoticed among all the living creatures.
The Sun insisted so much that on a bright June morning the Moon slowly started moving towards him until she covered his light. The movement was slow, so that the creatures below wouldn't be surprised by the sudden darkness.
As soon as the Sun could step down from his place, he headed towards Earth. To avoid calling attention to itself, the Sun took the body of the fastest and most discreet creature around: a black cat.
The Moon quickly grew tired of covering for the Sun and, without warning, started to recede. The Sun noticed this and in his haste to return to his place, he left behind thousands of rays in his mortal host.
To this day, the cats we call tortoiseshell are the descendants of that black cat that long ago hosted the sun during his visit to Earth. Today we can still see hints of the sun in the patches of red, yellow and orange that cover their coats. The split face on some of these cats is further evidence of their dual nature: half cat, half heavenly star.

Some folks say that their solar origin grants these special cats magical properties, they are said to bring good luck and attract positive energy. Also, these cats are very loved and appreciated in Oriental countries. It's common knowledge that whoever possesses one should cherish and treasure her.

It’s for them all but the rest don’t show any interest in it, at least someone is getting some use of it! This is a recent photo of Phoebe, dilute tortie, and one from maybe four years ago of my late Maddie, my torbie girl. (I was pleased she liked the bag, I bought it because it looked like her.) mila lovessss cuddles and being held

This has become a recurring theme between Miss Eleanor and Bashful. They will hiss and swat at each other............and then lie on the bed together.