My two male kittens will be neutered next week (27th). One has an undescended testicle so his operation may be a little more invasive.

I’m just wondering if there is anything I should be aware of in terms of recovery. Do cats tend to worry their stitches? Believe it or not, I’m only familiar with neutering in pet rats who do like to torment their wounds and horses who just get on with it.

I am not overly concerned but would appreciate any pointers you may have in terms of helping them to a speedy recovery.

I had three male kittens done in February two that each had an undescended testicle, and honestly it was really no different in terms of recovery. The biggest difference (aside from price) was their bellies were shaved not just the balls and one had two incisions to keep an eye on the other had 3 (vet had a hard time finding the internal testicle). They were given a few days of pain meds but were back to normal the next day just like their brother who had a normal neuter. I kept them confined to one room for 24 hours so the anesthesia could completely wear off and I could monitor them but they were fine.

Some males do lick down there so you do need to keep an eye on it, and if they are ones to bother it a lot they may need a cone. I've had I think 7 or 8 males neutered over the years and never had any have an issue, most were back to their normal selves the next day. Most also don't have any stitches, just a dab of surgical glue, the two with undescended testicles obviously had internal dissolvable stitches too.
T

I checked him last night and the testicle has appeared! It is in a funny position in the scrotum - one in front of the other as opposed to two side by side. Hopefully it will stay in position and all he will have a regular neutering next Wednesday.
T

One might think I might know a thing or two about testicles given that I have them but it seems I either imagined the second testicle or confused his willy for one. In any event, Humphrey (or Little Bo Peep as we are now calling him) is recovering nicely from his surgery and will have his stitches out on Saturday. He is very good humoured about the whole humiliation. I suspect he is longing for a game of feather wand though. I had to get a larger cone than the one in the picture as the crafty little thing was propping himself up on cushions and performing all manner of contortions to pull at the bottom stitch. Funny and worrying! His brother Amos had a more conventional operation and was back to himself the next day. 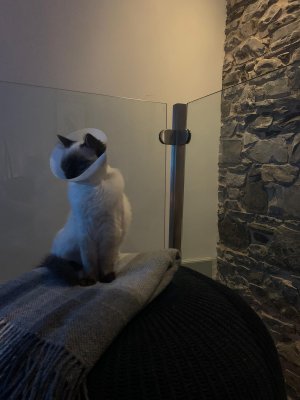