I recently adopted a white kitten with tawny ears and tail and paws, as well as some coloring on her back. Our family cat of 17 years who I had grown up with passed recently and we wanted a kitten who felt very different from our beloved Tabby. Our new furry family member is sweet and not aggressive, but man is she a tornado. She is around 4 months I believe, her mom was a rescue/spay/return. She has some behaviors that seem a little odd--I've been reading through the forum to get some hints but I also haven't slept very much since we've gotten her so bear with me if I am missing some obvious answers. Originally we thought she was a white kitty with orange tabby calicowith sparse coloring, but a couple of friends have said she lookslike a "colorpoint" as her coloring on her extremities has darkened to more of a brown while her back has stayed a pale beige.

We've been trying to implement a play/cool down/eat routine but she absolutely won't cool down, even if we slow down and put her toys in another room. Even after she eats, she will be wired. We are keeping dry food available, although some have said "free-eating" can lead to sporadic bursts of energy, but she's a kitten and I want her to have all the nutrition she needs! The 2nd and 3rd night we had her she slept at my feet all night, but for some reason the bed is now an activity zone even though I have never played with her there. She will just run and run and run until she's running up the walls, LITERALLY. I know she isa kitten, and I expect her to have bursts of energy, but I've never had a cat with THIS much energy and total lack of fear. She even puts her tail in her water bowl and leaves it there, so I doubt water spray bottles would faze her. Don't get me wrong, she is a sweetheart, but I haven't slept since she's been here and I need my bed back. Haaaaalp please!

This is my baby cat 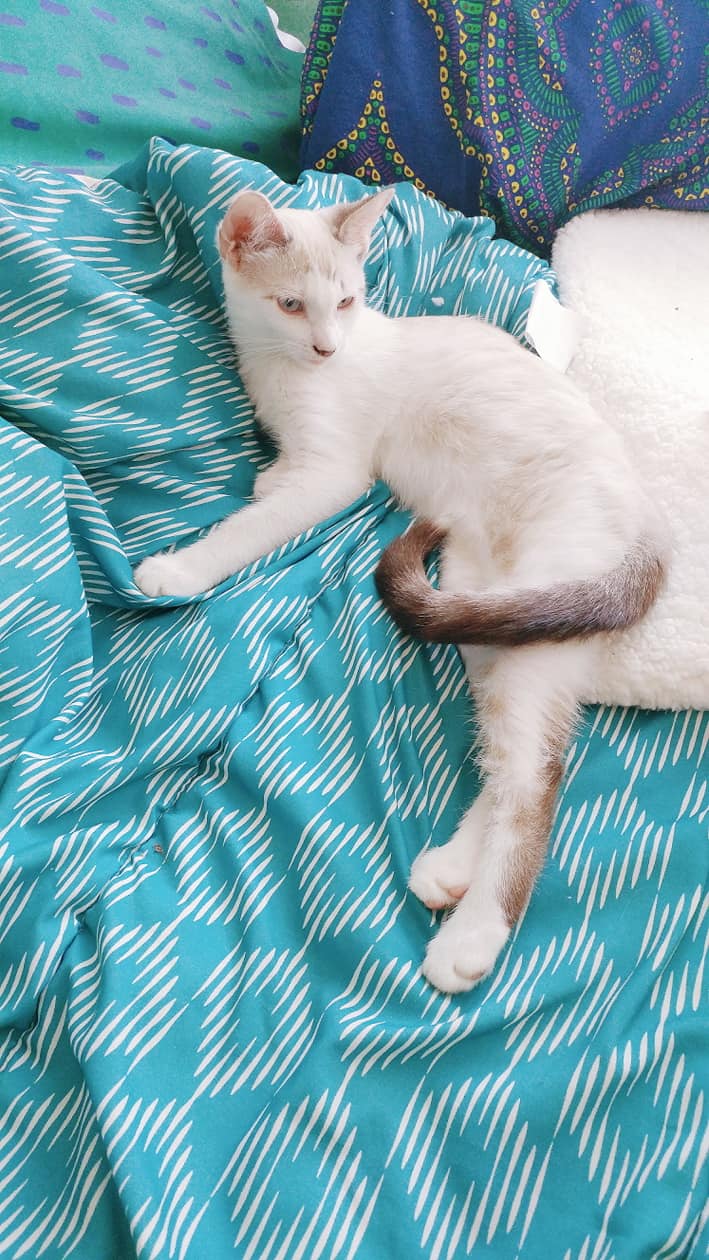 This was her in her short lived sleepy faze 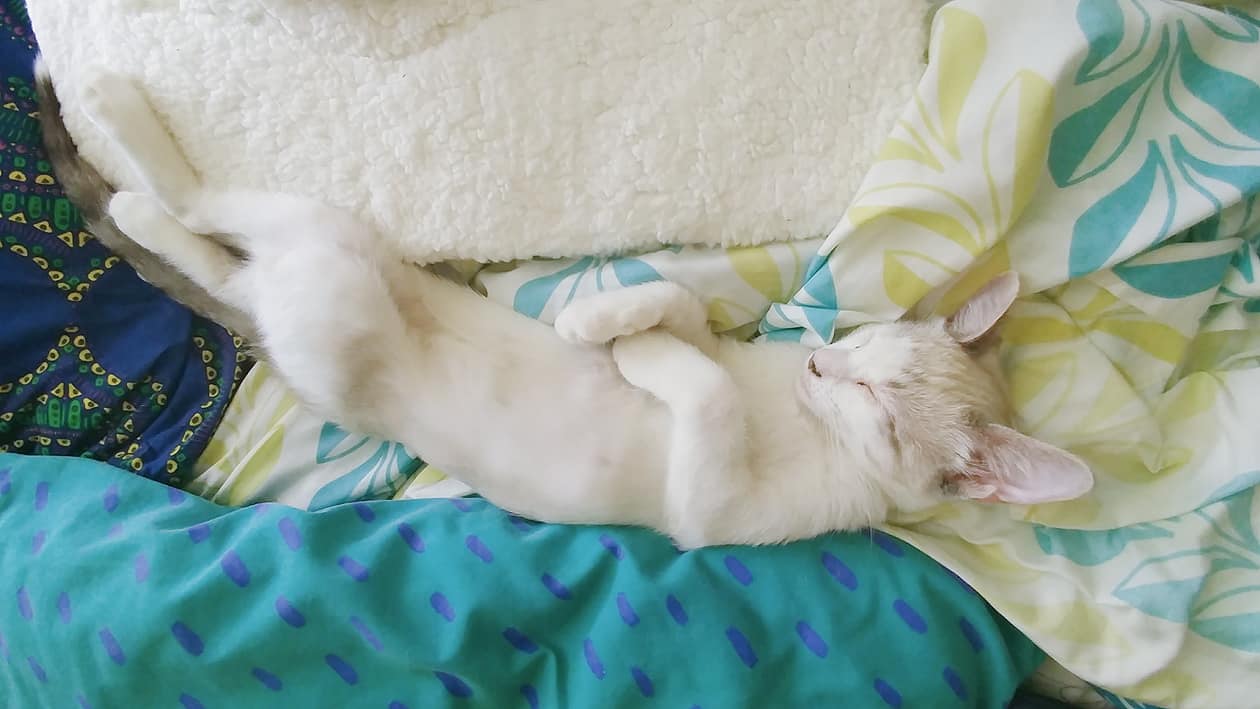 Also, she seems to play with her litter box, but it's like she has to use it too. She almost always seems to get all worked up to use her litter box and then gets really worked up after, and leaves and comes back a few times to dig.

What a beautiful girl! Full on kitten can be exhausting after a sedate senior. Some kitten play with the litter box but then out grow it. You could try a covered box and/or puppy pads under the box to contain the mess. There are different ways to deal with bed play.
1 -I've always used the mama-cat method. When she is in the bed gently hold her still and rub her head until she calms down or sleeps.
2 - You could ignore her completely.
3 - When she starts say "sleeptime" put her in the hall and close the door.
4 - Just keep her out of the bedroom until she's older.
I'm sure there are others and better ways to explain them. I'm fuzzy headed today, hopefully some clear headed will give fuller descriptions than I can today.

Her behavior really isn’t odd - just hyperactive kitten behavior. She does look like she has at least some Siamese ancestry and they are known to be active and smart cats. She may settle down some when she reaches adulthood or she may remain wild and crazy for years afterwards. Give her lots of playtime, provide her with places to climb and things to see out of the windows, make sure your place is kittenproofed with anything she can knock over secured and enjoy every minute of her “crazies”.
Last edited: Aug 11, 2018

One other thing about your kitten. I expect as she gets older she will continue to darken her fur color, ending up with a tan or even brown back and face.

First, bed should be for sleeping. Which can be a hard concept for kittens. The moment she starts moving around try going completely still. Not an acknowledgement or no moving legs or saying her name or anything. Try this for two weeks. A solid two weeks without any reaction and start the clock over if you do respond. You may be inadvertently triggering play. If that doesn't work start saying no then ignoring her.

In general, with hyper active kittens there really is no down time. You take your breaks when she sleeps and be ready to go again when she wakes up. I keep wands and toss toys near every chair and flat surface. So I can watch TV and wave a wand toy or toss something for Link to play with. We have two ball track toys and a scratcher that we can quickly get going without too much focus or stopping a movie.

Which isn't to say the routines and habits are unimportant. Just while she's a kitten expect it to always be play time. As she gets older those habits and routines will be more important. My boy now will tell me it is bed time and will let me sleep most mornings. It just took a good year. That first month I didn't sleep much (he was 5 weeks old) but as time passed he learned my routine and knew when to sleep. As he lost some of that kitten energy he stopped being play all the time and more play on routine. Although he still has wild spurts but I have another CT who gets most of that energy now.
K

Thanks for all of these perspectives, I'm going to take these into account as she grows into an adult kitty.

One other thing that I forgot to mention is that she seems to wait for me in hidden spot, like she is so playful, but she will sit doing NOTHING until I am around--then she will start using her energy. Is this just a kitten hood way of expressing happy energy, or do I need to do more to make her feel comfortable alone, or is it bc the siamese need a lot of one on one attention, or perhaps something else?

I agree there is some Siamese (or maybe more Tonkinese genes) in there. And sounds very much like my Blue!!

Blue is a "leap first, aim later" kind of cat! *Always* ready to play - with pupils wide as dinner plates. I can barely pet her, because it energizes her so much. And OMG the acrobatics!!! I have seen her hang from a curtain rod - not because she climbed the curtain, but because she lept to it from a cat tree a few feet away.

She's also the only cat I've had that will play with catnip toys all on her own. She loves to toss them in the air, catch them, toss them up on the couch, lose them, find them, etc.

Here is my bad news - Blue is now 2 years old, and STILL not slowing down much. Well, maybe a tiny bit - she does let me pet her for a few seconds, before she starts rubbing on my feet and dragging toys to me. Also Blue has 3 other cats to /try/ to play with. So while I usually get to sleep great, I have no idea what she would be like as an only cat.

My good news for you is, smart cats can definitely learn. It might take some time to learn the rhythms of the house - when is play time,when is food time, etc, but she'll figure it out. Again, as energetic as she is, night-time wakeups are rare.

As far as recommendations go...try a laser pointer. With most cats, I don't like to use, because the cat can't actually catch/kill their prey, so it becomes frustrating. But at least with Blue, she just wants to run and chase something. Try to find paths for he to run up, down, around, over, etc. Dining room, kitchen, living room, hallway, stairs....every area can be part of her track/field/gymnastic stadium!!

.
K katmojo - I suspect that this lovely little pointed kitty will retain her four white mitts and white facial markings.
.

Marx is a pretty wild kitten too and that's why he isn't allowed into the bedroom when it's sleeping time.

For the first 2-3 weeks we put him in his own room for the nights (he was 3 months old then, and I felt it's better to have him in the kitty proof room with his stuff) now he has the whole apartment to go wild during the night - all except for our bedroom. I don't think he minds that at all. I never heard him meowing during the night.

For playtime, balls and catnip mice are a good way to have them entertain themselves for a while. I also bought one of those plastic ring toys that have balls inside: Not all cats like it, but he does - for a while at least. When he gets bored of it, I hide it and put it back after a week or so and he's all over it again. Every time he brings his feather toys we play with him as long as he wants to. Or at least play fetch, he likes that very much.

He also very much enjoys digging through the litter box, so I switched it with a closed one. He is still digging, but at least he can't throw all the litter out.

Those may not be the best solutions and more experienced owners would be able to train their cats properly... But this works for us