Pimenta and her stripes

A short while back I posted here about finally managing to capture Pantera's "ghost tabby" markings in a photo. Now it's Pimenta's turn

I've written before that Pimenta is a very good example of brazilian feral cats. History states that the Portuguese brought felis iberis with them to Brazil, while (north) american felines are descended from british shorthaired stock. I can attest that there are visible differences between the average american and brazilian felines; selective pressures and several centuries can do that.

The tabby pattern serves as camouflage, and the various types work very well. Pimenta- and the point of this very wordy post- has something that I haven't seen before: she has two tabby patterns, one superimposed on the other. Along her back and limbs she has the classic/marbled pattern, but on her sides there is distinct tiger striping underneath the marbling. The photos are far from ideal, but you can see a bit of the two patterns on her sides I call Pimenta a "double tabby"

She's lovely! Do you have any pictures of her standing, so that the tabby pattern on her sides can be seen a bit better?

My guess is that what you are seeing is a variation on the classic / blotched tabby pattern. ("Marbled" is a pattern name used only in the Bengal breed.) The gene for blotched tabby was found in 2012 and you might find it interesting to read the paper: Specifying and Sustaining Pigmentation Patterns in Domestic and Wild Cats

More recently, researchers are finding genes that control additional variations on tabby patterns, causing the scale of the pattern to be bigger or smaller: Developmental Genetics of Color Pattern Establishment in Cats

Pimenta's pattern might come from an interaction between classic / blotched, and some kind of pattern modifier like the ones found above. If you can get good pictures of Pimenta from the side showing her pattern, you might consider contacting the researchers on these papers, as they might be interested in Pimenta's variation.

I'll take a look: I think I have a pic or two

Ok, here's a photo from way back when Pimenta was still new to us. She was around four months old in this pic; you can see that she has stripes underneath the blotches This next photo is from last night. It was a quickie, which is why the quality is terrible. Nevertheless, you can see the mix of blotches and stripes Yes, I would call that a blotched / classic tabby pattern. Some cats have vertical stripes in the bullseye like that.

You can even see this effect in one of the examples of blotched / classic tabby pattern used in this 2010 genetics paper on tabby pattern:

Mammalian coat patterns ( e.g ., spots, stripes) are hypothesized to play important roles in camouflage and other relevant processes, yet the genetic and developmental bases for these phenotypes are completely unknown. The domestic cat, with its diversity of coat patterns, is an excellent model... 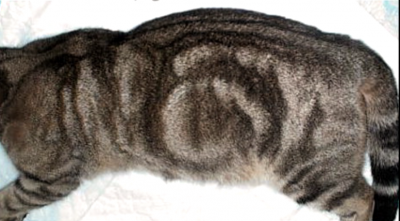 Interesting... Here's a better photo, taken right now. You can see better how it looks like two different patterns at the same time I don't think what you are seeing is two patterns at the same time. I think it looks like a variation on blotched / classic, similar to the photo I posted. Pedigreed cats are selectively bred for "clarity" of pattern, with many generations of selective breeding to eliminate that type of pattern variation, however non-pedigreed cats have a lot of variation.

You could still write to Chris Kaelin (the main researcher on those papers above) as they might find Pimenta's variation interesting!

Very true: unlike the pedigreed cats most cats (especially ferals) are a result of natural selection. That is, most cats are the way they are because it works: the tabby patterns are excellent camouflage. Anyone who has looked for a tabby in the brush has experienced this. Many people seem to forget that cats are highly optimized predators.

One thing I notice among the stray/feral cats here in Brasil is how they have adapted to urban living. Most here are some variation of bicolor white and grey tabby. The most common pattern here is a mix of spots and stripes*. This gives these cats near invisibility in the urban jungle