Yes, it is possible to be in heat as early as a week after having kittens. That's probably what it is.

Make sure she is still nursing her kittens, and do not let her out no matter what!

This is why strays have back to back litters.

It should pass in a week, but can return about 2 weeks later, if indeed it's a heat cycle.

It's tough on the cat and the household in general.

Yep, I would bet she is in heat. My cat had litters less than 70 days apart, so became pregnant immediately. She was nursing two litters at once for a while!. As for taht neck wound, has she had a flea collar on at all? Did your mom put one on her? Some cats are highly allergic to those. Since your mom switched foods, I would definitely switch back and see if she gets better. Your cats are absolutely beautiful!

I had a feeling it was heat. She's still nursing and being a good mama but she's not in her room as much as she normally is, she is extremely clingy lol. So I'm periodically closing the bedroom door to just make her spend time in there. There is NO way I'm letting her get out, if I could spay her this second I would but alas we have a long road ahead before that can happen.
As to the neck, I took her to the vet and he felt strongly it was an allergic reaction to something. He didn't want to do shots because it was not infected or very deep, they're basically surface wounds and he didn't want to put anything in her system that might compromise baby. I did switch her food and it has already immensely improved. She's not digging herself or chewing or anything anymore and the places are actually starting to heal very nicely in just the short time I've had her switched. Im happy she's feeling so much better.

I feel for you, I remember going insane when my cat's went into heat! Have her spayed as soon as possible after the heat and the baby is a little older. I'm so glad she is feeling better! 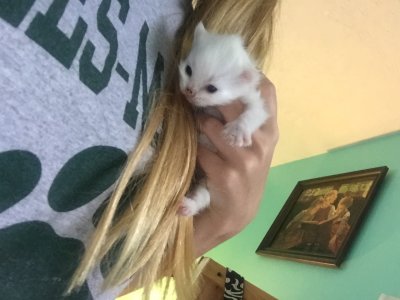 He's getting so big! Still so hard to take a picture of him lol.

Kittens life was lost to a negligent veterinarian.

Thank you for taking this little mama and her baby. They're beautiful. 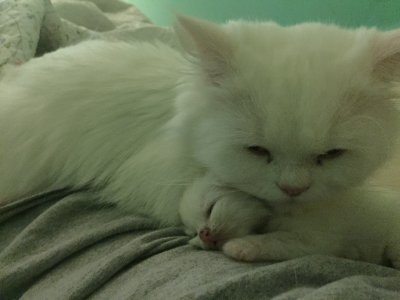 Got this sweet gem just now..baby and mama have been fussy tonight and she was acting overwhelmed so I moved baby up in bed on my belly and she followed without hesitation. They're both purring in their sleep.

Absolutely beautiful! That one should be framed!

Bless them.. Looks like you got a male kitten after all ! 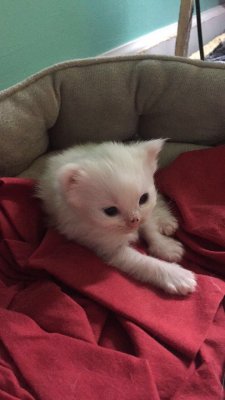 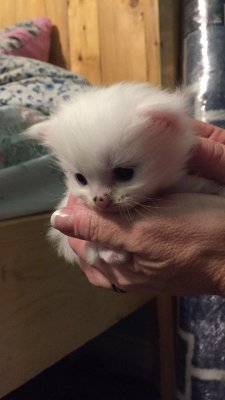 Three weeks and a couple days old, he's learning to play and I'm kind of functioning as his sibling at this point lol.
Any suggestions on how to introduce him to the litter box? I know it's about that time to familiarize him with it and to get a box with very low edges but I don't really know what to do from that point.

Yes he will learn by watching his mummy cat.

Okay so here in the past two days mama has been trying to move him. He's been in my bedroom, the back of the house since birth and she basically has the entire room to herself, all of her things are in there and I only go in for visits and to sleep. I play with baby now that he's older but she doesn't mind and sleeps while I do because it seems to give her a break. There is a small gate in front of the door to keep baby from wandering out but she can come and go as she pleases. We do have a little dog that sleeps in the room next to mine but she literally could care less about the cats besides having to walk by the doorway to get to her bed.
I've closed the bedroom door to keep her in there because literally whenever it's open here she comes trotting through the living room with little dude in her mouth. She is trying to move him into my brothers room all the way on the opposite side of the house, which is directly off the living room where we spend most of our time. It's not that I really mind her being in there, it's just pretty cluttered and not very safe for the baby.
Anyway, do you think she's moving him because of me handling him? Or is it because she wants to be closer to people because she's bored in the back of the house? I don't really know what to do because I don't want to make her unhappy but the room she wants to put him in just isn't a good place for the baby

She wants to be closer to people. Perhaps it's time to let them both in the general living area. Most cats want their babies to socialize with the people they trust.

Thank you. I've been spending my time in the bedroom with her and the baby on the bed and she's quit trying to move him. She's been very clingy the past couple of days and demanding to be held lol.
A picture of the baby this morning, he's four weeks and a day. 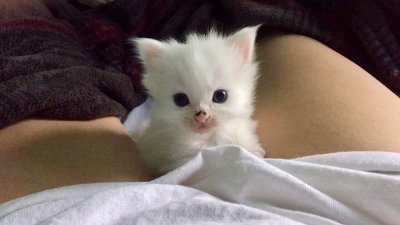 That baby is precious!

So baby is 4 and 3/4 weeks old and he doesn't seem to be getting full from mamas milk, he has to suckle for what seems like ages to get full. She's still producing more than enough but I've been introducing him to wet food since Friday. It's natural balance grain free turkey patte, I tried using the kitten formula fancy feast but he absolutely refused to touch it but scarfs down the NB. I'm only giving him about a teaspoon twice a day and he seems so much happier after he eats it.
I guess I'm just wondering if that's okay? He has almost a full set of teeth now and he plays constantly so I didn't think the extra calories could hurt.
Here he is today 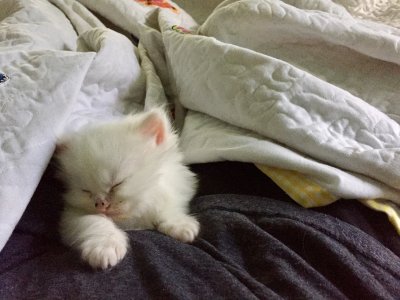 You can give him as much of it as he wants. Kittens have huge appetites as they are constantly growing. It's good for him. This is just the age when they begin to need more than just milk.