Hi all, new here and I jumped right in with a post rather than reading first.

to you and your kitty.

Do post photos of your kitty for us to see!

DebbieLamb said:
Hi all, new here and I jumped right in with a post rather than reading first.
Click to expand...

welcome to the site
D

I have 2 inside cats and 4 barn cats. Not sure I have recent photos of all of them. I will have to see what I can find.
D

My two house cats, Sammy (the black) and "Kidden". She never really got a name. This was taken July 21st, when she was still looking "okay". 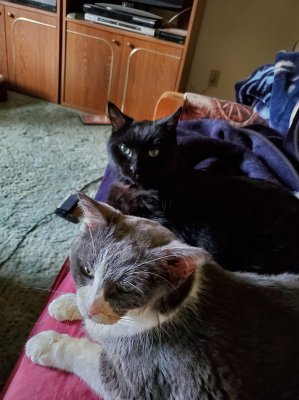 Stumpy (barn cat) is judging you.

She was born late in the year and one of her ears froze. She's a sweetie. 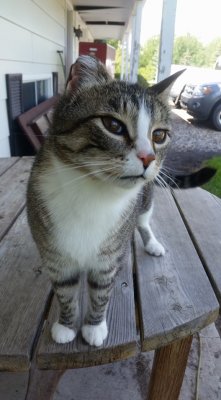 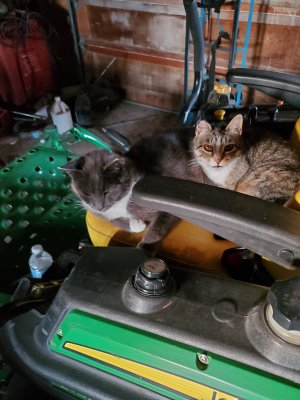 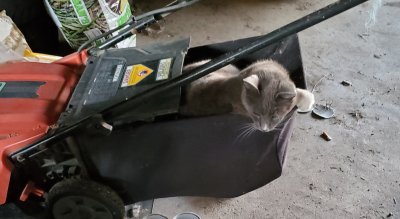 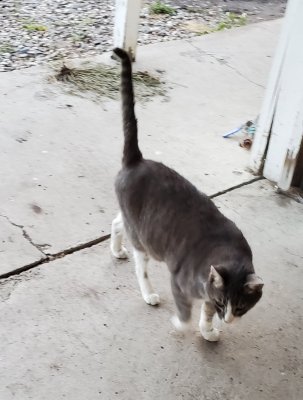 DebbieLamb said:
I have 2 inside cats and 4 barn cats. Not sure I have recent photos of all of them. I will have to see what I can find.
Click to expand...

Wonderful to have you here! SUCH lovely cats, including the barn cats! Gotta love a cat that works!

Welcome! Aww. Her ear froze? I am so glad she and the others have you looking out for them. No matter what, they are all, always, beautiful! Thank you for the photos. We love kitty pictures here. The gold eyes on your barn kitty are stunning! Wow!! Hello and we are very glad to meet you DebbieLamb Stumpy, Kidden, Sammy and barn kitties. If you like kitty pictures too, there are some great photo and video threads here. I hope you’ll start a thread. Maybe tell us all about your kitties and being a barn cat? That would be great!

Sammy and his sister, Pouncer (and a brother) were born as barn cats but were abandoned by their mother when they were three weeks old. When I found them, their brother was already gone and I wasn't sure Sammy and Pouncer would make it. They were so cold and still. I scooped them up, wrapped them in a towel and got my niece and her friends to warm them up while I had a shower. By the time I was done my shower, they were definitely alive and protesting that they were hungry. I took them to the vet because I'd never bottle fed kittens before, so got kitten milk and advise on what to do for them. They not only survived, they thrived. I didn't intend to keep them as pets but after bottle feeding them and basically being their mother, I couldn't let them go. When they were a little over a year old, Pouncer was diagnosed with lymphoma. Because she was a young cat, we decided to try chemo. The chemo gave her another six months. She touched so many lives. She died at home and when I took her to the vet clinic to have her cremated, everyone there gave me a hug. Every vet and tech and front end person in the clinic had something to do with her care at some point in those six months. Her main vet thanked me for trying chemo on her. He said most people wouldn't try and he learned a lot as a vet through that, and he'd been practising for many years at that point.

Sammy missed his sister and while animals grieve, he did adjust. He was an only cat for a number of years until I brought Kidden into the house. She was a barn cat, Sammy's half sister (same mother, different litter). She'd been attacked by a strange male cat and had puncture wounds that needed to be treated. Easiest way to do that was to bring her in the house. I decided that if she and Sammy could get along, she could stay as a house cat. There was a little hissing at first but no fur flew. She discovered she quite enjoyed the house cat life and that things were soft in here. She has never once asked to go back outside.

I've had a number of barn cats over the years. Sammy and Kidden are the last two of the line of my original barn cats. I've had strays wander in, I've had drop offs. At first, they just bred and bred and I got tired of dead kittens, so I got the ones here at the time spayed or neutered. Barn cats tend to not have long lives, and gradually they all disappeared. The only ones left at one point were Kidden and her two brothers, then her brothers disappeared and all that was left was Kidden. Then a stray female wandered in and had a couple of litters of kittens. Then a drop off female came along and had a couple of litters of kittens. The population was starting to explode so I had everyone that I could catch spayed/neutered. The four that I have now are the ones that are left from litters of the drop off female. She was a great cat, she disappeared one cold winter day. Stumpy is from her first litter and the other three (all males) are from her second litter. They are all over 10 years old now, which is pretty good age for a barn cat.

Hi there! We are happy you are here! Welcome to TCS!

Thanks for caring about the barn cats and getting them spayed and neutered when you're able. It must be heart-breaking for you when they up and disappear.

Welcome to you and your adorable furry family!