Hi, I know this question gets asked ALOT, and I’ve read through all the “new cat” posts, and still am not finding any new ideas to help with our cat integration. Here’s the scoop on our situation.

THE RESIDENT: Our resident cat is a super affectionate two year old tripawd boy. (If you follow Jackson Galaxy, he is a total mojito). He has no off switch and just wants to be petted and cuddle all day. He’s energetic, curious, vocal, and makes a loud thumping noise when he walks.

THE NEWB: Our new cat is a four year old tortie female that we rescued from the shelter a few weeks before Christmas. She’s a nineteen pound obese wallflower who was dumped out in the country, trapped, brought to the shelter, and then adopted by us a month later. She loves being petted and brushed, and patiently allows me to wash/groom the areas she can’t reach because of her obesity. She flinches at every noise, and is on constant hyper vigilant alert. She’s not food driven (ironically), and dislikes wet food.

ENVIRONMENT: New cat was set up in our office and she clearly feels very happy and safe in there. Our barrier is a tall baby gate with a draped blanket, so she can see us, but not the resident cat. She’s been in there six weeks and has zero interest in leaving her safe room.

HISSUES!! Resident wants to meet new cat so badly - he sits at the baby gate all day, pawing at it, hitting it, poking through it, and meowing loudly. This freaks out the new girl beyond measure. She hisses nonstop at the resident cat and takes an aggressive body posture. It’s been six weeks and she still hasn’t stopped hissing at him. I’m terrified to take down the gate because I don’t want my resident tripawd sustaining a bite or losing an eye.

WHAT WE’VE TRIED: Scent swapping has had zero effect, there is no hissing or growling. Feeding on opposite sides of the door has no effect, because the new cat doesn’t rush to her bowl when I put it down. She will let it sit for hours, and only eat when she’s comfortable. (She’s on a prescription weight loss kibble diet, and is not yet interested in wet food at all). Site swapping has failed, as the new cat gets so stressed out that she just claws at her door trying to get back in. We’ve tried locking up the resident cat and taking down the gate, but the new cat still refuses to come out and explore. Feliway Diffusers are plugged in, and we are also giving new cat CBD drops orally and putting Rescue Remedy in her drinking water.


IDEAS? What’s left? I feel like we’ve tried every trick in the book. My friends say to let the new cat set the pace, that she’s just scared, and it could take months of separation. Other say that the new cat may always hate all other cats. My husband is over the segregation and wants to take down the barrier baby gate and let them work it out. Everything I’ve read says that cats don’t just “work it out”, and that violence will ensue. I’m stressed and open to any suggestions. I want both cats, and I want them both to be happy. Thank you! 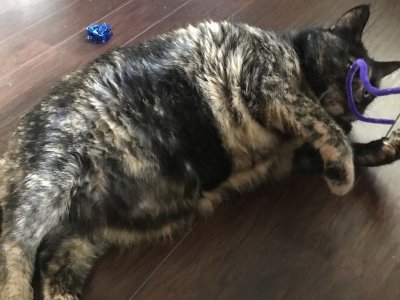 I seriously doubt that a cat that obsese is going to iniate violence. This is likely sound and fury because the cat is scared, not because they want to attack. You could just have a towel ready to grab the other cat, since there is always an off chance of a surprise.

Now admittedly, I generally tell people a bit of hissing is fine, but a ton is evidence that the intro process still has more work to do. So generally one would not move forward in this situation. However, six weeks is a long time. Aditionally, despite the high level of hissing, I think there is a chance they can work this out, as your tripod cat is unlikely to be as scary as your obese cat is imagining. This isn't a situation where a healthy one year old is just going to be remorseless with the jumping. Hopefully, very little physical stuff, and the tripod just wants to sniff and get close. So hopefully, exposure to the reality - vs the imagined fear - will help move this forward.

While it doesn't seem to be going great, you have two cats that are reasonably unlikely to be very physical with each other, so the prognosis is likely not as bad as all that. There is a chance of a breakthrough here.

Now perhaps I'm wrong -- a young healthy tripod certainly has the potential to be physical enough to terrify an obese cat -- but I think its time to see how this will play out. As long as you don't let them actually fight, no harm will be done even if you need to back up after the trial. If, as I expect, you have a ton of hissing but nothing physical other than maybe some defensive swats from the obese cat, then there is a realistic chance that they will be able to make progress on their own.
Last edited: Jan 23, 2022
D

I've been through similar situation (reintroduction) and I know how hard it can be..
I'm sure forum experts will have some tips and advices, and as I'm no expert I can share with you the things that worked for us.

Along with everything that you're doing, try to insert games and playtime.
After a hellish week and a half, we've decided to try again, step by step - with many short playing sessions (each one with a cat, two sides of the door).
All in all it lasted 3 weeks (felt like years..)

Hi. Going at the pace of the slowest adapting cat is necessary. So, your newbie is not ready to step forward just yet. You don't know her background, so despite the fact that she is obese, it does not mean she wasn't abused by people or other cats/pets for that matter. Since she is more comfortable with you, it is possible her previous bad interactions were with other animals. She was also abandoned and dumped in a strange place and has been through a lot since then. She has learned her own room means security and safety and she is not yet ready to 'relinquish' it especially since she knows doing so involves another animal. With an unknown background, and her behavior so far, 6 weeks is nothing in terms of time.

Tell your husband to find some patience and not to push the issue. I don't know how long you have 'locked away' your resident cat, but maybe you need to do it for longer periods of time and more frequently. If someone can be with your resident cat, that would be helpful. Otherwise, find other means of entertainment while he is 'locked away'. The newbie needs to be able to figure out that she can leave that room without running into your resident cat - that alone could take some time to even get her to try to venture elsewhere.

You can try to get her used to soothing music - they even have 'cat music' - by initially playing it at a low volume in her room while you are there with her, and ideally if she likes it, you can play it for her at times when you are not in that room as a means of comfort and familiarity. Then, you can play the music in another room of the house, lock your resident cat as far away from that new room as possible, and carry her in there with you to just sit and spend a little bit of time. Maybe very short spurts to begin with and lengthening to duration over time. Once she knows that is also a 'safe' space, she may be more inclined to venture elsewhere - as long as your resident cat is not present. Repeat in other rooms until you get a sense she can relax outside her safe zone. Just one example of other tactics you can try to add to the overall introduction process.

Personally speaking, she needs to become more comfortable in her new home before being exposed to another cat. It isn't like she doesn't know there is another cat in the house, so she shouldn't expect the house to be animal free other than her forever. Getting her used to one thing at a time should help the process overall.

You follow Jackson Galaxy apparently, so I don't know if you are familiar with some of the relevant articles in this site regarding new cats and cat introductions, so I've provided links below in case you might find any helpful tips in devising a plan going forward.
How To Help A New Cat Adjust To Your Home – TheCatSite Articles
How To Successfully Introduce Cats: The Ultimate Guide – TheCatSite Articles

EDIT: It just occurred to me that since she seems to like confined quarters and is overweight, perhaps she was caged/confined to a small area in her past life - could explain a lot.
Last edited: Jan 25, 2022

Good thinking. A four year old so over weight may well have been in a restricted home and little opportunity to develop her cat hunting/play skills. A larger home and a new and unfamiliar experience of sharing it with another cat must seem very scary to her even if her previous home was a very kind and loving one.

If she continues to be on high alert and not tolerating any level of introduction it might be worth talking to your vet about a prescription to help her calm down, esp as limited results with the CBD, Rescue Remedy and Feliway.

And be aware of your own anxieties around their introductions. The more calm you are the more you will pick up on the tiny cues our cats give us about how they feel. It might just help them both to feel safer about seeing eachother, and taking that step to testing out life in a large, controlled area of your home where both have their escape routes and safe spaces.
Hope it all starts to settle. It is such a stressful process for cats and humans to go through.
You must log in or register to reply here.
Share:
Facebook Twitter Reddit Pinterest Tumblr WhatsApp Email Link