Hi everyone, I’m brand new to this forum. I’ve been reading some of the posts and articles and I just wanted to share what’s going on and ask for some reassurance and a little advice. This is going to be quite a long post, so thank you in advance for your time!

i had two cats for almost ten years. In early September, my 18/19yo cat Diamond passed away somewhat suddenly leaving just my 10yo cat Georgia (Georgie). It took Georgie a little while to adjust but she’s a very sweet, playful, curious girl and she’s always been pretty good at adapting (she’s one of those rare cats who doesn’t need a slow transition to a new litter or new food). Almost four years ago, a tree fell on my house and displaced me, Diamond, and Georgie, and she dealt with that pretty well. She is definitely a bit of a fraidy cat, though, especially when it comes to other humans. She’ll hide under the bed until they leave, and she doesn’t like heavy rain or wind or thunderstorms (which I’m sure is totally normal). 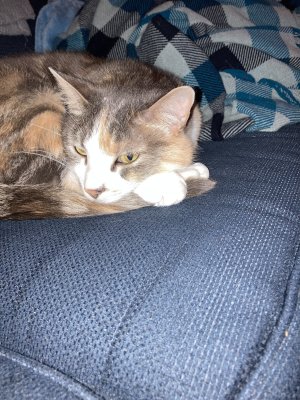 Anyway, over the last couple of weeks I’ve been feeling like I might be ready to adopt a kitten, and was able to pick him up on Saturday morning (two days ago). I have him set up in the bathroom with food, toys, a bed, a litter box, and his carrier. His name is Benji, he’s 11 weeks old, and he’s a tiny ball of fluff and energy and is incredibly adorable and sweet. 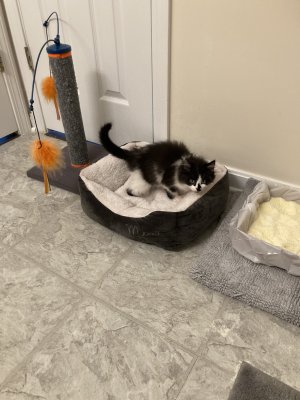 I realize that posting here like this after two days is a bit of a ridiculously fast freak out, but I tend to be a very anxious person in general so having a little bit of advice and reassurance from a community of fellow cat owners and lovers will really go a long way toward making me feel better and more calm and like I can do this introduction thing.

My questions are as follows:

1. I’ve been trying to spend as much of my time with Georgie as I can so she doesn’t feel replaced or neglected, but I’m also trying to spend at least a half hour with Benji playing and just hanging out every couple of hours, but that’s only been because it’s the weekend. On Tuesday I have to go back to work (in the actual office!). I’m debating about coming home during my lunch break to check on things, but I also am sure that my anxiety is affecting Georgie and vice versa so I wonder if it’s better if I spend the whole day at work to let her do her thing?

2. Georgie is hanging out around me and being mostly herself except I can tell she’s on heightened alert and is running to hide under the bed as soon as he makes a noise IF I get up to check on him. If I sit there while he’s playing and meowing (he sounds like a squeaky toy - it’s hilarious), she’ll be up on alert but won’t hide. Is that an okay sign? She hasn’t really been aggressive other than hissing and growling when she sees him. And I’m trying to make sure that doesn’t happen much. I have a makeshift barrier in front of my bathroom door to give me an extra few seconds when I open the door so he doesn’t escape - the fence I ordered hasn’t arrived yet.

3. I had to move Georgie’s food bowl across my condo so it’s far away from the bathroom. I didn’t really want to disrupt her regular routine, but she’s usually fed right across the “hall” from the bathroom door and she won’t eat if she can hear him. Is that an appropriate thing to do?

4. Apart from being patient (which is hard for me! Like I said, I know two days is nowhere near enough time for this process to be moving forward, I just hate seeing Georgie so anxious), and picking up some feliway diffusers when I go to the store, is there anything else I should be doing or can do to make this process easier? Any advice would be most welcome. I’ve already gotten some thoughts and ideas from some other threads, but the more prepared and knowledgeable I am the better I feel.

Thank you all so much!
A

Sounds like its going fine. I'm glad your going slow, because 10 year olds tend to have a kind of difficult time adjusting to new cats, and I wouldn't bet on yours being different just because she was chill with a move 4 years ago or whatnot. Its not so much that going slow will magically fix things and help them become friends, but rather when your letting them freely interact in say 3 weeks or so and Georgia is still rather hissy and stressed, at least you'll know you did what you could. You can certainly do more or less time depending on how Georgia is doing, but regardless, there is a chance you'll end up on what I call the long slow road to toleration, where Georgia seems rather unhappy and stresed for a bit. Typically, even though it moves pretty slow, you can at least get to where the older cat is only upset when actively being pestered relatively quickly, but unfortunately kittens can sometimes be pretty remorseless about it. Its not the end of the world, and things do get better.

You do have a shot at getting lucky, and even full friendship is a possibility. The probability though is that even in 2 months, if Georgia could talk, she would *still* ask you what the bleep you were thinking and if you could "get rid of it." Thats ok, it is what it is, and you cant let it stress you out. Hopefully, well beore then Georgia will be basically be her old self except when actively being pestered. Its basically just like a crotechety live-in mother in law disdainfully asking why you had to adopt a child. Thats just the way crotchety mother-in-laws roll.

About going home for lunch, if it's your first day back after a long time, I would. If you've been working from home since the pandemic, her normal is you being home. I wouldn't ask her to put up with the scent of a new kitten and you being gone all day.

Neko-chan's mama said:
About going home for lunch, if it's your first day back after a long time, I would. If you've been working from home since the pandemic, her normal is you being home. I wouldn't ask her to put up with the scent of a new kitten and you being gone all day.
Click to expand...

I’ve been working in the office for the last four or five months so her normal is actually me being gone. But with the new kitten I’m not totally sure how to approach this.
You must log in or register to reply here.
Share:
Facebook Twitter Reddit Pinterest Tumblr WhatsApp Email Link