Today, I brought my Kelsie Kitty (the one in my Avatar Picture--the black and white kitty) to the Vets. I noticed in the past few weeks, she seemed not like herself. Then, she had a series of hacking up furballs and I thought, "Oh good, this is what is wrong..." She didn't seem to rally though, after the furball-hacking stopped. She was eating, but looked like she was losing weight. Her fur started looking bad over the weekend and......she started drooling. Yikes. I got her into the Vet this morning and......she has terrible open sores in her mouth again (Stomatitis). The 4 canine teeth left in her poor little mouth, (as all the other teeth have been previously extracted). now also need to be removed. The Vet said, the Stomatitis is an auto-immune thing and if there is any active infection/irritation going on, the Stomatitis will never go into remission.....
She previously had this Stomatitis when she first came to live with me, after she left the Cat Shelter. Turns out the remaining 1/2 of her teeth needed to be extracted. So, this was done. Her Stomatitis seemed to go into remission and has been that way for about 9 months now. I feel so badly, as obviously, it started back up and I read the symptoms wrongly.
Tuesday March 26th, she's scheduled for a "Dental Under Anesthesia". In the meantime, they gave her Convenia (antibiotic injection) and Depo (steroid injection) to help her until the surgery. My poor Baby Kelsie!!! She has had such a ROUGH, ROUGH life so far. She was 10 years old, when she was brought into the Cat Shelter. They spayed her and said she had most likely spent that 10 years out on the streets of Cleveland, either pregnant or nursing.....pregnant or nursing..... Her teeth were BAD then, and they removed 1/2 of them then and the other half 2 years later. She is THE sweetest, most gentle little girl. Not aggressive, BUT, does NOT like to be picked up! However, she loves......loves being petted and brushed!! Purrs up a storm!!
Anyway, just wondered if anyone knows of anything more natural to help the kitties with their immunity? They were giving her the Depo Shots at the Shelter too and that cannot be a good thing!!!! Just asking if anyone has any suggestions as to how to help her stay healthier after the new dental extractions are done? I HATE the thought that this Stomatitis might keep re-visiting her. Hate that!!!
W

My stomatitis cat is on steroids, but NOT DepoMedrol shots. He's getting oral triamcinolone, which the vet says is better tolerated for long-term use by cats. So if the extractions don't work for her, you could ask your vet about that.

I don't know of anything more natural that has good results.

I have his meds made chicken-flavored at a compounding pharmacy because he's hard to medicate, and it's still fairly inexpensive ($35 a month), so if she doesn't mind it in the original form I'm sure it would cost even less.

Thanks for the info on the Triamcinolone! I have her scheduled in 2 weeks for the Dental under Anesthesia, so will definitely ask the Vet about this for her. I just truly wish she did not have to endure ANY of this and also, if she did have this, that a Homeopathic or natural remedy could and would help!!! Thanks again!

How is Kelsey Kitty doing? My Lance was just diagnosed with stomatitis. I came across this suggestion for cucurmin/turmeric.
Stomatitis Relief
Because Lance's colony has had calicivirus, FHV1 and FIV, (plus FIP), I am planning to add L-lysine and possibly CoQ10 (I need to find a CoQ10 without soy).
For myself, turmeric extract has worked great on my IBD and non-specific autoimmune disorder; years ago, I overcame gingivitis (without surgery) by adding CoQ10 to my supplements.

Thank you SO much for asking and for the other info!! So Kelsie had her 4 Canine teeth extracted, 4 remaining incisors and 4 remaining ROOTS (From previous extractions from another Vet--Ugh.) Poor, poor baby girl!! She was so beyond miserable this past week. However, when I brought her into the Vet for her surgery, he looked into her mouth and said the Stomatitis had improved a LOT. Now, I do not know if it was strictly because of the Depo and Convenia (antibiotic injection), because I had gone online to see if I could find a Naturopathic website that maybe had something to help with Stomatitis. I found a website and ordered 3 things. They are flavorless as they are Homeopathic. I used them as directed, every day for a week, until she went back to that Vet. They were not cheap to buy, but in my mind, if they helped give her some comfort, they were SO worth it to me! So again, not sure what exactly worked for her, but I am STILL giving the Homeopathic meds and she is healing well. She had her 1 week post-op visit yesterday. He said her Stomatitis is 95% cleared up and the gums are healing "nicely". So, I was wondering, does the Turmeric taste agreeable to cats??? My Kitty is one fussy Kitty-girl!!! (Sigh.) I did look up the CoQ10 and coincidentally, the website that had a LOT of info, is the same, exact website I bought her Homeopathic meds from a few weeks ago for her poor mouth sores (Stomatitis)!! Here is a link, in case you are interested-- (Not sure if my links will come through, but you can go to their websites to look, otherwise!)
CoQ10 for Cats & Dogs: Pet CoQ10 Supplements, Vitamins & Benefits

I really appreciate the info and am going to order the CoQ10 too. I want Kelsie to have quality of life now!!! She is eating well again, and acting like her old self again, for the most part...……… So, I will be SO happy when her poor little mouth is all healed up. And I really, really hope that vile Stomatitis NEVER returns again----EVER.

Kelsie, upon returning home from the Vet's yesterday. Happy she was back home and getting better!! Aaaahhhh!! OMG!! So, my Granddaughter found this YouTube Video channel for Cats. It is a Bird Channel. Well....Miss Kelsie who is improving daily (THANKFULLY!!!) and her "Sister" Holly, are totally enthralled with the Cat-Bird Channel!

Wonderful update!! you have such beautiful cats

Miss Kelsie (I LOVE the name!) looks like she is doing great!! Thank you for the links - I am going to share this thread to another thread. I wouldn't mind a sub-form just for specific problems such as "stomatitis" "urinary/kidney issues" "thyroid", etc...
....and just to return the courtesy of sharing pictures, I will add a picture of my own little Lance, who until the past 2 years, was awesome at playing step-dad to foster kittens pulled from feral colonies. Lance is 7yo. 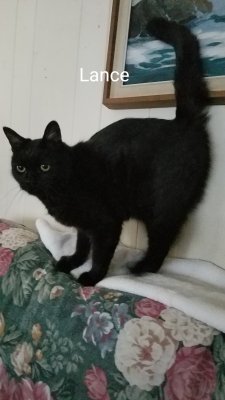 Oh Thank You! I am so, SO relieved that my Kelsie seems to be healing from all the horrific mouth problems. Slowly, but it seems like she is definitely going in the right direction. I am grateful for this.
And...….your dear Lance ( What a sweet boy, taking care of the Fosters!!!) looks SO much like my little Holly! missy&spikesmom : How is Miss Kelsie doing with her oral health? What holistic protocols have you been continuing (if any)? My poor Lance is having a bad spell despite the vet putting him on Clindamycin plus my adding the CoQ10, marshmallow root, L-lysine, licorice root and tumeric extract

My vet worries that Lance could get kidney problems as well.

Sorry it took me awhile to get back to your question! So, at this time anyway, she has almost no sores in her mouth. A tiny one on the right side and it is smaller than any she has previously had. I would be SO happy if ALL of them were completely gone!!! The Vet said when she removed the last of Miss Kelsie's teeth, that a lot of times, when the source of gum infections is removed, the Stomatitis can disappear completely. So, since it is a few months now, since she had her final teeth extractions, maybe she is going in that direction??? I SURE do hope so! I do still give her the Homeopathic medications I listed above, from this website. I am thinking it cannot be doing anything but good, and hoping I am right! I hope you can get your Lance-Kitty on track to feeling better soon! This is the link---> NotaSAN Drops and Capsules
M

Thank you missy&spikesmom for the links to the natural products. That site has a full article about stomatitis. So far we tried the probiotic and it has been helpful: Pet Probiotics | The Best Probiotics For Cats & Probiotics For Dogs

Hi. So my cat has had dental issues for a while now as well and can't get treated still as she's not eligible for an operation. I think we all know if things are at an infection level antibiotics are the only (temporary) solution but I found these help to decrease the chances of oral pain:

- NOT hard texture kibbles. Hima gets disturbed by wet food with pieces and her mouth gets sore with most kibbles out there. She loves mousse-texture wet food and kibble that is more on the soft side.

- Dental products: beaphar Toothgel, mouthwash specifically made for cats (to add to their water). There are also products like brown seaweed people praise, like ProDen Plaque Off Dental Powder but I haven't tried them. Brushing makes the situation worse for gums when the gums are already sensitive. Well it did with Hima.

- No cold food. I keep half of Hima's wet food in the fridge since she doesn't eat it all at one sitting. I let it get warmer (if I forget with a little hot water) before I give it to her. I suspect cold doesn't help.

There are also some products for wounds in the mouth vets prescribe. I'm not a fan of using them but if things are getting worse I put a little on a piece of boiled chicken. That's what she chews/keeps in her mouth the longest.

For plaque there are also some chewing toys that work like flossing. PetStages has some. I have one from them.