Hello! This is my tuxedo bobtail kitty, Pipurr! I have had her about 2.5 years and she is roughly 7 years old and almost 14 pounds… still a bit too chunky, but we are steadily working on getting that down with a healthy diet!

A fun fact about Pipurr, is that before me, she lived with a foster, and two other families. According to the foster mom I adopted her from, Pipurr was found as a kitten outside. Then, the first family adopted her from this foster, but a few years later, they returned her back to the same foster… and by that point she was no longer a tiny kitten but 22 pounds and hugely obese!! The foster said she filled a cat carrier with her fat rolls.

She was put on a diet, and in 2019 she was put up for adoption again, brought home by her second family, but returned only a month later because that family‘s dog didn’t like her!

A relatively short time after that occurred, I saw her adoption ad online and knew I had to meet her!! She charmed me from the moment I met her and I knew she was the cat for me!
I am her last stop!

Also, due to her significant weight loss, she has loose skin folds that hang down low on her tummy… there is no such thing as liposuction for cats, so they are there to stay it seems, and when she runs the folds flap around and it looks rather funny!

I shouldn’t laugh… but I do 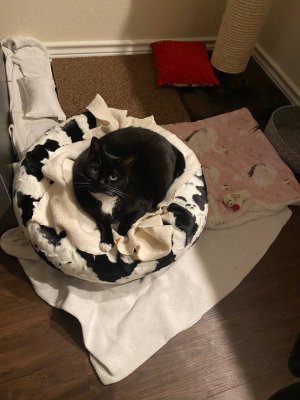 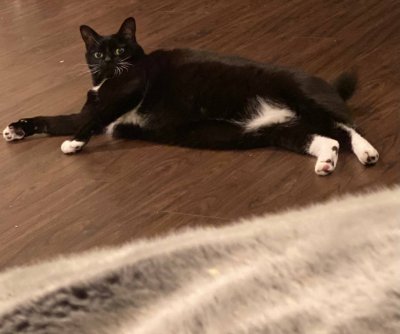 
So glad that you’ve joined this wonderful site and you are in the right place for all things cat and this site is loaded with tons of rich resources and you’ll find friendly and helpful cats around and many of our cats are very knowledgeable in cat related stuffs.

She is such a cutie

Do post more photos of Pipurr and we have a special thread here just for her in tuxedo-cats.281802 and many fun threads here in fur-pictures-and-videos-only.29 to showcase what your kitty is up to.

Pipurr is a pretty girl.

Welcome to you and beautiful Pipurr!

Hello to you and to Pipurr! Those folds of skin are called "primordial pouches," and even normally weighted cats can have them. My own furry little soccer ball has "primordial duffle bags."

TubbyBubby said:
I am her last stop!

I know the feeling!

That's how I felt when I met our present cat who was also returned to the shelter.

I'm glad you joined the site and introduced us to Pipurr. Thank you for adopting and giving her a forever home. I'm sure she has given you her full attention and unconditional love.