I was just about to post that she was going on 24 hours since her last squirt and was hoping that meant we were in for something more formed. And sure enough. We got one really long poop rope. It’s still not quite the right color or consistency but it’s an improvement. She went back to the box a couple of times but only strained and farted. And then she looked settled enough for us to leave the bathroom and her stinky fart closet (where the boxes are.). She still looks a little unsettled so I’m going to keep watching TV with her until she looks less, “I may barf.”. But then as soon as she’s good, I’m off poop watch and can enjoy this fantastic location.

If Krista’s pooper was working more reliably and when we’re finally done with fleas, I could see us doing another trip. Even if it’s only within town. But she certainly doesn’t travel light on the luggage. Toys and a scratcher and litterboxes and a Litter Genie and her gate and...I almost brought a Katris piece with us so she’d have a step up. But she doesn’t need it. There’s an ottoman in this room that I pushed into the bed and she only uses it about half the time.

She’s looking better now. Off to the tap room for me and she can sleep and nibble and listen to her cat rock and look out the window. 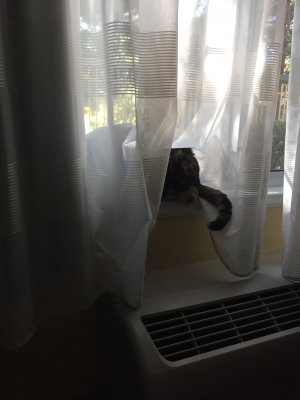 Im supposed to run a 5K tomorrow. But Krista has been restless all night and then acid barfing the last hour. I was planning to put her back on mirtz in the morning because she’s not eating without it, hence the acid barfs. But there’s no sense in letting her struggle for four hours. Mirtazapine should help in both the brain (quiets the vomit impulse) and the stomach when she finally puts some food in it. The actual mirtzing went easy enough. Now we wait for the love bomb and the munchies.

The acid barfs stopped and she did finally eat something. In between all the love bombs. But her eating has slowed again. Hmm. I guess one upside to her not eating much yesterday is that I’m not overly worried about “poop watch”. She shouldn’t have much to poop anyway.

I drove home first without the cat to get furniture put back in its place. And the carpet still isn’t dry from Friday night. Which means the flea spray probably isn’t dry either. Shoot!

They had to move some things around on their end. But the hotel is able to accommodate us for one more night. I’d rather pay one more night at the hotel than whatever the animal ER would charge us.

Krista is back home, sleeping in her tree. Like she hasn't been avoiding that cat tree all summer. Or didn't just spend three nights in a hotel.

Since Krista didn't really eat anything on Saturday (since I skipped her mirtazapine dose), I didn't have to be on poop watch yesterday. I'm resigned to whatever may happen this afternoon. I know Friday's bomb cleaned up well enough. Since resuming mirtazapine on Sunday morning, her eating has slowly picked up as well.

I did make it to the 5K yesterday morning. It was a "5K-ish". So everyone got a new PR (personal record.) One of the runners who had a watch fancier than my $10 Casio said his watch measured the course to 2.96 miles (vs. 3.1 for a 5K.) Still a fun course. The start and finish was literally a stone's throw from my hotel room. Krista could have watched both if she didn't have very important sleeping to do.

Last night's poop was a little softer and a little lighter than I'd like it but it was thicker than ropes. It was 90% of the poop it could be. I would take those everyday. Best of all, it was one and one. No distress. Not even a thought about a carpet bombing.

This morning I discovered the folly of sending the guardian home with an exact amount of liquid medicine. Today is day 9 and her morning dose was probably a half dose. Whatever dregs I could shake out. The remaining doses never made it into the cat. I will drop by the vet's office this afternoon and pick up more. One poop doesn't make for a recovery. If it hasn't been getting more difficult to get her to take the medicine meal, I'd be inclined to keep her on the metro a little longer. I'll email the doctor and see what he says. In the meantime, she still likes the yeast if we have to give the metro a rest.

How very frustrating for her!

Last night she had a perfect poop!

And then, a couple minutes later, the squirts followed. Luckily, she went back to a box for the first squirt, and I could shut us into poop jail for the rest. Back and forth between two boxes I was cleaning them as fast as she could dirty them while making sure all her offerings made it to a box.

We're on day 10 of her 10 day metro course. I'll email the doctor for next steps. I'm inclined to give her a short break to see what s. boulardii alone can accomplish. Also because we ran out of metro and the batch we got for the last day or so of doses is a more bitter batch than the last one. I need to see the effect of high doses of s. boulardii outside of the the influence of metro since it's going to require more yeast to get her to keep taking that metro. Maybe a break in metro will allow me the time to get it compounded.

Krista is done-ish with this course of metro. I started her on a PM dose. I’m letting her cut out one AM dose early. She’s not done with the clostridium. But I want to give her gut and butt a rest from antibiotics. The s. boulardii has stopped the diarrhea. But we’re still having issues with loose stools. Starting in the morning, I’ll add the dirt, her Pet Flora from Vitality Science to the yeast and get the right bacteria recolonizing her gut.

As for tonight, still on poop watch. Her eating has slowed in the last few days so this may come later tonight. Because there isn’t an urgency or increased frequency, it’s not technically diarrhea anymore. So this is still an improvement over when we started the s boulardii and the metro. But last night’s squirts tell me we’re not done yet.

I'm glad her poops are getting better! I think I'm going to have to look into probiotics...

I think the metro (or the clostridium/enterotoxin itself) has been doing a number on her stomach. She'll get through first breakfast and first dinner alright. Often times finishing it. But by second breakfast and second dinner or the overnight or daytime feeders, she barely nibbles. Not even enough to keep back the acid barfs last night. I changed one of her plates at 3am so she'd at least take a few bites.

But she's done with the metro for now.

So first metro-free meal, let's see what I'm going to put into it. Definitely the yeast. How about a pinch of psyllium and a smidgen of Pet Flora?

I re-plated new portions without the psyllium and a smaller amount of Pet Flora in only one of the plates. Both are pretty much finished now and she's resting off the morning in the tree.

Mirtz'ing went easy enough. Though I'm missing the love bomb. I didn't see her spit it out. Maybe it's going to be a delayed detonation later tonight.
F

Oh yeah she has you well trained.

Sounds like in spite of it all she is still more up than down. XOXOXO

Oh yeah she has you well trained.

Sounds like in spite of it all she is still more up than down. XOXOXO

She's not eating enough. To be fair, it's not all being digested when she does eat enough. That was my thought process with the psyllium. Slow down the fast bits. But at 36+ hours since her last one, she may not need her poops slowed any further. Or she needs more volume. In any case, let's see a post-metro poop before we start messing with her med stack too much. I think a little dirt with the yeast is do-able and appropriate.

Yeah about faking. I sit in front of her plate with a capsule of yeast and even if I don't pour any out, she comes over like, "is that my favorite seasoning?"

I am also constantly doing A/B test: plate food one way on one plate and another way on the other and see if she has a preference or will finish both.

Or I move food from one plate to another making it look like she's almost finished with a plate. She'll go to that one to finish it and then go back to the other because, "hey, more food!"

I'm having to sit on the floor with my boy sometimes, and even reach out and touch the plate, then he'll decide that particular flavor is ok

Furballsmom said:
I'm having to sit on the floor with my boy sometimes, and even reach out and touch the plate, then he'll decide that particular flavor is ok

Especially when I need her to eat the medicine meal. I will plate the tiniest amount of food I can mix the metro and yeast in and still have her eat it. Then I grab whatever yeast I didn't pour out to hide the metro and sit with her seasoning her medicine "meal" until it's gone.

Getting her through pancreatitis last summer was a lot of meals spent seasoning her dishes a bite or two at a time until she finished an acceptable portion of food.

I’m nervous these days when she’s eating well because it’s usually moving too quickly through her.

And I’m nervous these days when she’s not eating well because it’s not moving quickly enough.

After 50 some hours, finally!

But it consisted of at least two squirts that swallowed up any formed bits. It’s only because she started to scratch at the carpet near the bed that I was able to wake with a start and shoo her into poop jail until I was certain she was done and not planning the next carpet bomb.

I added a Pinch of Feline Comfort Plus to an extra portion. She’s not so crazy about that one. So I added some more yeast to that. Feline Comfort Plus is a super-mix of psyllium, pet flora, digestive enzymes, slippery elm bark, and bentonite clay. As much as she may not like this, she’s hungry because her food’s running too quickly through her. Hungry enough to eat a medicine portion.

This may be crazy. I may make another batch of meat stock for her. Even though I suspect it was an undercooked drumstick that caused this infection, I think if I stick to wings and cook to a minimum safe internal temperature of the meat, I still believe in the healing effects of the stock and the availability of easy nutrition (and hydration) when her normal digestion may be challenged. It would certainly be easier to mix in some of these powders she may be less crazy about into stock instead of more yeast for anything she doesn’t want to eat.

wow, I'll have to remember this one.

Furballsmom said:
wow, I'll have to remember this one.
Click to expand...