If you do try the cage, I think he may complain but all of mine , first just loved being where things were active and second, if they complained they stopped once they learned it was not going to change the way things had to work. They did settle down and all of them still like to go into the cages. I have them in the cat room and they like to take naps in them. Lol Private retreats! Not sure about having the music 24/7 but you can always try it to see. Every cat is different so we can’t predict exactly what Finn might like. I’m all for trying things to see what they like.

I am no expert, but i do suggest it is debatable if cats truly enjoy music or not.

and some say,
all cats are different.

Of all the genres of music I am well versed in, classical music does not always strike me as "relaxing".

Music IS a topic that i know a bit about,
and classical music is huuuuge umbrella,

It may well serve to smother out noises such as thunder or nearby drilling that you DO know upset your particular feline.

that said, i do not have an opinion on whether or not all cats would actually like the contrived noises of our species. It is possible.

I suppose,
one would have to actually play a certain genre of music, (there are so many 100s to choose from)
and
then actually observe their own particular cat, to see if their cat did,
or did not,
lie down and relax.
I would imagine that a genre with a more steady, even tempo of ongoing repetitiveness, might possibly be soothing to an animal, not classical. but, that is just my 2 cents

I loooove music, ALLLLLL genres,
(yes, even rap, yes, even country, and yes, even opera)
and even i can not listen to music 24/7 or for hours on end.
but, that's just me.

I suggest you play some genre of music (maybe a genre with a predictable, steady, repetitive beat or rhythm to it?)
and observe if your particular cats seem more relaxed with that music on?
and after many hours of said genre of music, is cat still relaxed?
i do not know....guess you would have to do a test of some sort, with your individual feline...
?
who knows?

Feral Mom Very good points. I think every living creature is different so trying different types of music is a good idea. My daughter had health issues and when she was very ill, she found a particular piece of Native American music to be especially comforting. In fact, she was on a great many types of monitors in the hospital that registered all her vital signs and we were able to see the physical effects the music had on her vital signs. They went from being very bad to very good. It was wonderful to see how this particular piece gave her comfort. No other piece of music had the same effect. It was , as you said, very even in tempo and repetitive. I like it too!

^ Cat Daddy discusses if cats like music or not.

@buffster, not sure if that short lil clip

will help you decide. I guess the others are right, that all cats are individuals...

I just watched that clip. I think what he says there is good information.

Feral Mom for adding information for us all.

Buffster7 said:
I could try it (the cage with me in the room). I'm nearly sure he would complain the whole time if I were in sight, but of course there's no way to know until I try!
Click to expand...

He probably wouldn't like being caged in "his" room, but what about being in the cage in another part of your home? That way he'd get a change of scenery, get to be with you, and maybe give him and Charlie a chance to interact a bit with you near by. Just a thought, but of course, remember I'm NOT speaking from personal experience with feral socializing.


Buffster7 said:
I play that Music for Cats when I leave his room at night, but I don't usually play music in there during the day - do you think I should?
Click to expand...

Maybe a radio station with a mix of music and talk?

rubysmama said:
Maybe a radio station with a mix of music and talk?
Click to expand...

....with this thought, maybe have it on a timer so there are periods of quiet?

What an interesting discussion and information about cats and music! When I first brought my two into their safe room, I heard that harp music was soothing for cats so I bought a CD with harp music and played it softly just outside the door to their room. It didn't upset them (and they did take naps when it was playing!) but I guess I can't be sure it was soothing! Honestly, it was VERY soothing for me!

Some good input here - thank you guys! The Music for Cats really seems to calm him down at night. He's a yowler, and the yowling stops when the music starts. I do think he'd do well with a TV - if I ever play a video on my computer, he's very attentive.

When do you think it might be time to try the cage? Nothing has changed here. I feed them nose-to-nose with the shelving between them and they chow down, no problem. I brought Finn out in carrier today while I cleaned his room and changed the bedding, and Charlie and he did really well. Not a single hiss. Other than that, zero interaction between the two of them.

Also, Finn has yet to have solid stool ever since the antibiotics. I'm giving him probiotics but I have yet to see a shape in the litter box..

Buffster7 said:
The Music for Cats really seems to calm him down at night. He's a yowler, and the yowling stops when the music starts.
Click to expand...

Avery said:
and they did take naps when it was playing!)
Click to expand...

I'm thinking the cats have spoken

Buffster7 said:
When do you think it might be time to try the cage?
Click to expand...

Buffster7 said:
Charlie and he did really well. Not a single hiss.
Click to expand...

If you can, I would take a poop sample to the vet. Less than 24 hours old. It could just be his diet though.

Buffster7 said:
Also, Finn has yet to have solid stool ever since the antibiotics. I'm giving him probiotics but I have yet to see a shape in the litter box..
Click to expand...

My Ruby was like that when I first adopted her. In fact, as I was new to litter box cleaning, I remember asking someone how to tell the difference between the pee and poo clumps. A food change to a duck hypoallergenic food, literally, created tootsie-roll stools the next day. So it's possible Finn has a food sensitivity. What is he eating?

One of my boys did not have formed stool for over 6 weeks after antibiotics. I tried 3 different probiotics before finding one that worked for him.

The vet actually prescribed flagyl (metronidazole) and it made the stool worse. I did take in a poop sample and all was fine. Yet better safe than sorry. You might want to get it checked out just to be safe.

Jcatbird said:
If you can, I would take a poop sample to the vet. Less than 24 hours old. It could just be his diet though.
Click to expand...

Will it matter if the samples are full of clumping litter? His stool is so runny that it spreads out in the litter and immediately clumps in a puddle.


rubysmama said:
So it's possible Finn has a food sensitivity. What is he eating?
Click to expand...

All pate: Merrick, I and Love and You, and Fussie Cat. An occasional can of Fancy Feast since it's what I fed him when he was outside before I knew I would make him mine, and need to use it up. So...a little bit of everything! Which is the least irritating, maybe I should stick with one type of meat. Only I don't have any duck, because Charlie won't touch duck.


rubysmama said:
I remember asking someone how to tell the difference between the pee and poo clumps.
Click to expand...

Exactly! The only way I can tell a difference is that the pee ball is more round, and the poop is more spread out like a puddle!


shadowsrescue said:
I tried 3 different probiotics before finding one that worked for him.
Click to expand...

I just started my 3rd one today - hopefully third time is a charm! I've also been giving him L-Lysine since the URI and I just read last night that L-Lysine can cause diarrhea. I'm taking a break from it today to see if that helps. Also added a little CBD oil to his food as I read that that can help with IBD. He is energetic and has a great appetite and has never vomited, though, so there's that.
Edited to add: When he has diarrhea, I can hear it bubbling as it exits, and the smell fills the room (potent). I don't know if that's indicative of an infection, or if that's just the nature of diarrhea?

Had some success with the cage just now! 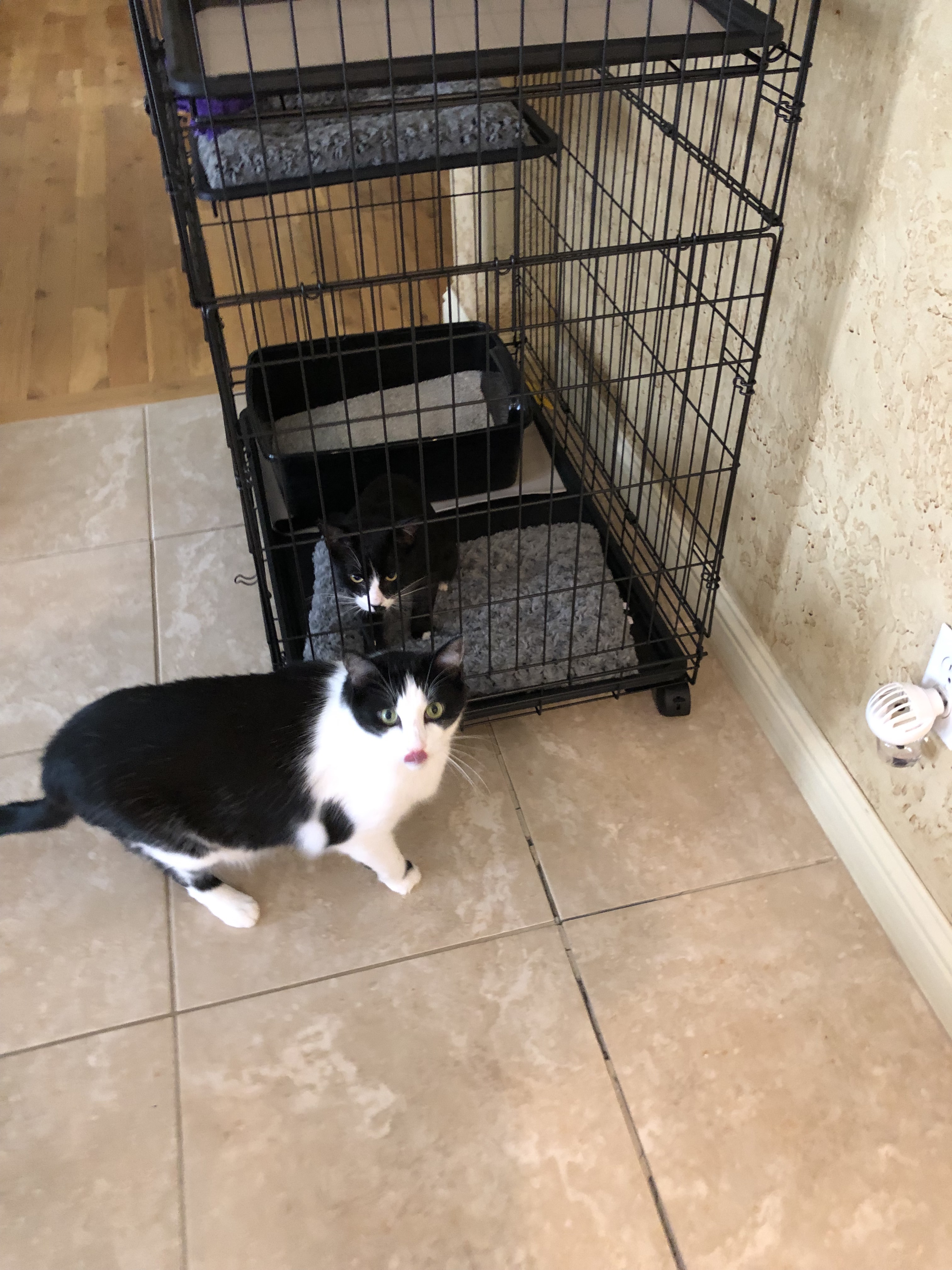 Was able to put Finn in the cage with no problem (wonders never cease). Wheeled him out to the kitchen where I prepped his and Charlie's lunch. Finn is so food motivated that he doesn't try to escape out the cage when there's a food bowl coming in the cage:

I tested a possible cage hangout spot before returning Finn to his room. It's right on the other side of the kitchen and has a door leading outside, nice eye candy for Finn and Charlie with the birds that hang out there. At one point both Finn and Charlie stood next to each other looking out the window (Finn in the cage and Charlie out, of course). There wasn't a single hiss, am so relieved. Finn reached his paws out the cage and tapped Charlie a few times - I was a bit concerned because I don't know if Finn knows how to properly us claws, but Charlie didn't flinch or hiss.

The whole encounter probably lasted 5-10 minutes. Finn back in his room now, and Charlie is crying outside his door with Finn yowling on the other side.

Great ideas! I just love seeing the videos. I had that same cage!

Buffster7 said:
Was able to put Finn in the cage with no problem (wonders never cease).
Click to expand...

I bought that Music for Cats by David what's his name and the cats usually run away and don't like it at all. And they're used to a lot of noise and music I make. It helps me sleep though lol

I didn't realize how long Finn is, until he stretched up the cage. You're definitely going to have to cat proof your entire place, once he gets to roam free.

Great videos. I really think those 2 will be best buds soon.

Oh, about the diarrhea, Finn's been through so much, that who knows what's upset his digestive system. With Ruby, she had (and still has) vomiting with her sensitive system, so different from Finn.
You must log in or register to reply here.
Share:
Facebook Twitter Reddit Pinterest Tumblr WhatsApp Email Link