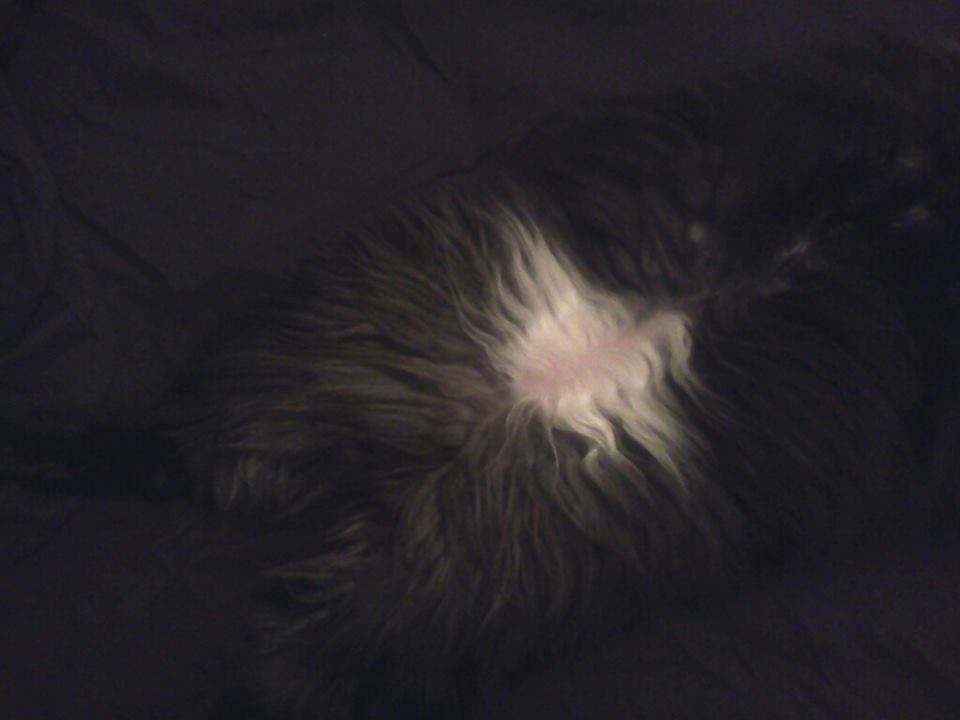 The above is his main accent, we call it his creme filling and it is only seen if he "gives you his belly" as it is at the lowest part of his belly. He has white ear hair and black whiskers as well as pale yellow eyes.
I am distraught without him and he became lost when he ran from my burning RV on March 21st around 825-840 pm on 41 S highway 9 miles outside of New Boston Texas and maybe 10 or so miles from Foreman, TX.
He ran straight east into a newly mowed corn field and no matter how much we begged, were eventually threatened with cuffs and jail if he didn't get back on the other side of the road. He would not appear within the next 2 days but possibly has been seen as many as three times in locations to the south east, then east and a smidge north and then due north. 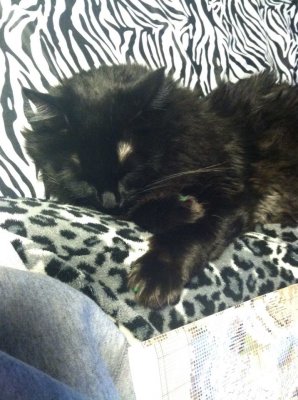 He answers to Jackie and puppy and his so loving (to me anyway) and if he's still alive, I must get him back!!!
He lost a boa constrictor brother and 2 furr sisters and a furr brother to and because of the fire.
I have returned a total of 5 times seeking, calling, playing a video with his cry on it,
just completely broken and begging with any signs. He is posted in the town we were taken to for the night, Ashdown cheers and jeers and also on Arkansas Lost and Found Pet Network.
I dont want anymore time to pass to lessen the chances of finding him decrease.

I am SO SORRY for your terrible losses....
Have you asked the local vets and the feedstores if you can put up posters? Are there any TNR/feral colony caregivers to alert? Another suggestion (I think Norachan suggests it) is to create an email address specifically for your cat and print flyers with it and ask people to put the flyers in their back windshields - it increases the likelihood of the flyer being seen by a wide range of people. You could also join FB's The Catz Meow Care & Share - I know that there are volunteer drivers in TX and they may have valuable insights or advice.
Prayers and vibes from California lthat Jackie Blue is safely returned quickly

You might also try to borrow humane traps from local rescues and shelters. Bait them with something smelly and good to eat, as well as, perhaps, one of your shirts that has been worn tucked inside the trap. Your scent will be familiar to him, and it may help keep local ferals away. Place them near areas where he has been seen, and check DAILY!

I am more sorry than I can possibly say for your horrible losses. Having lived through one house fire, although without loss of any lives, I have just the very barest inkling of your horror and sorrow. My heart with yours.
6

Still haven't heard from anyone that's seen him or found him myself....
My son has a occasional rages wanting to kill the cop who refused to let me go get him while I doubt getting a lawyer and suing for unnecessary loss and death would do any good.

No, laws regarding animals are medieval and award, at best, only the "market value" of an animal...as if our pets were toasters. At best, you might be awarded the amount of an adoption fee. What I would do, however, is to write to the Chief of Police, tell him your story, tell him of your family's grief at this unnecessary loss on top of the other loses, and how helpless and angry you feel over the action of one of his men, which certainly was not helpful at a time you so badly needed it. Honestly, I don't know if the chief will take any action, but you will feel marginally better for having done it.

Are you able to visit the area of the cornfield? He might have moved into an area where ferals congregate.
6

You have gone above and beyond. Social media is probably your best bet. I am so sorry that matters have been so challenging.

IF hes one to like kittens, consider blasting kitten mews thru there ... specter loves kitten mews and will gravitate to whereever i play them though she's never been lost

... or your voice, either recorded or yourself speaking aloud, but it's been a long enough time that you've been checking shelters, talking with the neighbors who live around that field?
6

Still nothing over a year now and now can't go due to Clovid ......

Oh, dratsgalldarnit!! I was so hoping and praying for an uplifting update from you...it is so gut wrenching to not know where your precious JB is at. I had taken in a cat that was lost from his family & we never connected; suffice it to say that he had a comfortable winter inside, sharing a room with 2 kittens and a cat rescued from the shelter's death row - the 4 of them made the cutest little kitty pile when sleeping. Let us keep the faith that Heaven is looking out for Jackie Blue as well.
You must log in or register to reply here.
Share:
Facebook Twitter Reddit Pinterest Tumblr WhatsApp Email Link