How do I stop a cat attack outside?

So Jackie almost got attacked today while out on a walk & I got clawed up protecting him. I will not take him that way in case Dora (the little fighter, cat) is there. However it did get me wondering, what I could do if I ever faced that situation again.

So I looked for Dora and I didn’t see her (she was hiding behind a bush.) So I took Jackie up onto the common ground/apartment yard (the building, not a person’s apartment.) She stares intently at him & growls. Jackie gets ready, so I jerk his harness a bit to get him walking. He grudgingly starts walking. She charges & I head her off and block her path by standing in her way twice, she retreats a couple feet. I pick up Jackie and carry him in my arms, starting to walk away. Jackie isn’t squirming or anything as I carry him. At which point Dora goes nuts and starts growling and trying to climb my legs to get to him.I walked away, my legs taking the abuse until she was out of room on her leash.... or that was my goal. Her owner hears her and comes outside,saying her name & no ...... which worked like she was a little calico attack dog. Dora stopped and I was able to walk far enough away, and get Jackie home. Who then hid in his tunnel upon his cat tree for a while. He was fine & I uninjured. My leg got a couple deep scratches but is fine.

What should I do if something like that happens again? Besides, not turn my back to pick my cat up?
A

When I had indoor/outdoor cats they would retreat to the house and yowl when a hostile cat was bothering them. However, when I went outside, they were so focused on defense they would not come inside, and I either couldn't pick them up, or feared they would claw me. So I faced your situation several times, and nothing really worked well. Yelling, stomping, water. I even shoved the enemy cat away once or twice -- kind of hard too, but a push not a blow, so I didn't feel too horrible about it. None of that works, as least not well. The "enemy" cat would retreat a bit, but not go away.

I do think your ability to pick up your cat in this situation (a helpful and unusual ability) would suffice against most hostile cats. Your being attacked seems unlucky, although it might have more to do with the particular "enemy" cat then being truly random.
Last edited: Jun 28, 2020

Maybe his ragdoll genes finally paid off? (Besides his soft fur?) I picked him up, belly up because that is how I carry him to a place all the time. He doesn’t mind. He sleeps belly up or in the crook of my arm. Also when I carry him from outside, that is how I do it. Once we were 20ft & out of sight of the ‘enemy’ I put him down and he slunk home (without protest) with his tail down until he got to my patio.... then hid/sulked in his cat tree condo/box/tunnel thing.

My neighbor even commented on how calm he was in my arms (she watched the tail end of her cat trying to get to Jackie.)

I try to be respectful of other people’s cats.... (the reason I didn’t try to push her off me when she was attacking) like not letting Jackie cross the line that divides our two concrete “patios” so he can’t bug her Indoors only cat. I don’t left him go within 5ft of any patio, even though there is no fence or rule against it. With Dora (“
the “enemy” calico) she leaves her on a leash but unattended for 3-5 hours a day .... sometimes I think all day (but not on a schedule.) So she really feels that part of the communal yard is her territory.... which might have fueled her aggression?

I think it is better to play it safe and just avoid “her” territory. Personally I disagree with her leaving the cat unattended and locked out. But that is just me.

That was the worst of the scratches (or I hope they are scratches) I cleaned with hydrogen peroxide, just in case. If any get infected, I will rush straight to the Dr. The rest of the scratches are small though some are deeep. I think she wasn’t attacking me so much as trying to climb me/my pants.

the other two pics show my little fighter in his bird watching spot & show what he considers “his” territory. 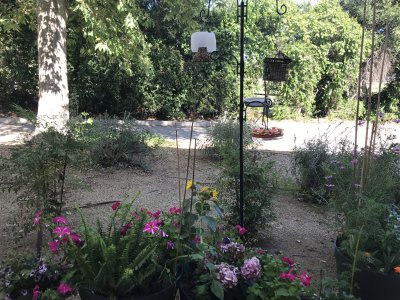 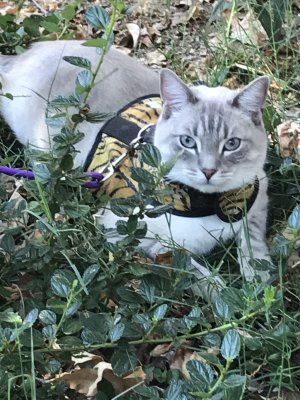 Oh, wow. I'm so sorry that happened to you.

That's good though that Jackie let you pick him up, so that he didn't get into a fight.


danteshuman said:
my legs taking the abuse until she was out of room on her leash....
Click to expand...

So Dara was on a leash? In that case, in the future, the easy solution is to avoid walking near her area. As for attacks from other cats, I'm not sure.


danteshuman said:
With Dora (“the “enemy” calico) she leaves her on a leash but unattended for 3-5 hours a day .... sometimes I think all day (but not on a schedule.) So she really feels that part of the communal yard is her territory.... which might have fueled her aggression?

Maybe Dora feels vulnerable being tied to a leash that would prevent her from running to safety if she was attacked. I'm pretty sure I've read that cats should not be left alone tied to a leash, for that very reason.
You must log in or register to reply here.
Share:
Facebook Twitter Reddit Pinterest Tumblr WhatsApp Email Link