I am back after an absence of about 3 years. Lost several kitties since then and one 18 year old just over a week ago. I did not think I would have a furball again but found this place to be too empty without one. Put down on paper what kind of a cat I wanted: 10+ years old, large, longhaired, male, selfcolored or tuxedo or pointed. Went on Petfinders as I could not find an older cat at the shelters which were full of kittens. Found a pair of tuxedo sisters but never got a response. Then a tuxedo described as "senior", gray-black-silver, Maine Coon mix. Went to see him at a sanctuary up in the mountains and was somewhat disappointed to see him. Oh, he is large alright and very fat, weighed in at 18 lbs, but he has no Maine Coon in him, just fat, his sides stick out. No tufts, fur is silky, no black just various shades of gray, mittens and boots go halfway up his legs, a white stripe across the back of one of his haunches. Not what I expected at all, gray tuxedo? Not really. If there had been a picture of all of him instead of just his pretty face I would not have gone to see him, especially not over 70 miles away. But here I was and really wanted a cat, did not want to wait much longer. I put him in my lap and he obviously liked me, started to purr, pushed his face into mine and then into my hand looking for scratches all over his head. I guess he adopted me as he came home with me although he turned out to be just 8 years old. That had been a stickler because I did not want to adopt a cat that would outlive me. But the people at the sanctuary (not a shelter, they also have horses and burros) assured me that he would always have a home there as long as he lived, he had been there as a rescued kitten, was adopted by someone who died after 6 years and so was returned to the sanctuary a few months ago. So that took a load off my mind. He has turned out to be a very affectionate cat, acts as if he had lived with me forever, has no bad habits such as counter surfing, and is now on canned food to lose weight, 1 large can per day with no treats and lots of playtime so that he will stop being such a couch potato. The cat who is my avatar passed away while I was gone, his name was Panthera. This new one is called Jabot because he wears a really big one but Panthera will stay as my Avatar.
Last edited by a moderator: Oct 3, 2022

here's the cat I just lost to failed kidneys, the fat cat and the picture that was advertised where he looks much darker, almost black 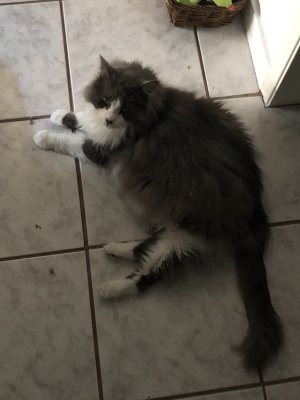 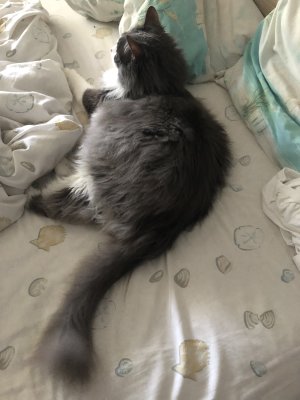 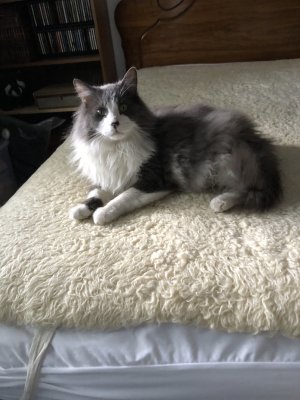 segelkatt welcome back and sorry to hear about your kitties

segelkatt said:
I am back after an absence of about 3 years. Lost several kitties since then and one 18 year old just over a week ago.
Click to expand... Good to see you again and hope everything's well with you.

to hear about the loss of the cats

Welcome back, Dear Lady. I am so sorry for your loses, but I welcome Jabot, and thank him for bringing you back to us. Oh my! so nice to be welcomed back by so many people.

tabbytom said:
View attachment 433001 Good to see you again and hope everything's well with you.

His name is Jabot, pronounced the French way with the accent on the second syllable and the J like the second G in Garage, because he is wearing such a handsome jabot.

he is a real love and while he does not look like my handsome red Chamouti his behavior is much like his: always with me in the same room, sitting on me , at least part of him, snuggled up against my back at night and very talkative. Of course most of that is complaining about an empty food bowl but that fat boy needs to lose a lot of weight because 18 lbs is way to much even for a large domestic longhair. So he gets 1 large can per day divided into 3 meals, no snacks, no treats, he has a water fountain with R/O water (who knows what is in tap water these days) which is what I drink and cook with. LitterRobot that he took to without even being shown, so there is always clean litter and no stink. That is one spoilt kitty as were all my previous cats.Thank goodness they all lived well into their teens besides Capucchino, the Birman, who got to be 20!